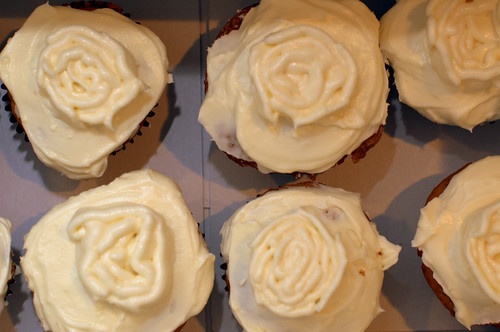 Consider this a lesson in scale. Something no cookbook will really tell you. You won’t see in the notes something like “If multiplying batches, strongly suggesting NOT trying to mix them all in one batch as your kitchen equipment is designed for home-sized batches, not bakery-sized ones”. Pretty obvious, right? And yet it wasn’t to me, until a few days ago. But now I know – when scaling things in multiples, you might want to do a few batches, to save your sanity and your equipment. In any case, this is a cautionary tale, just for you. 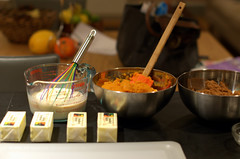 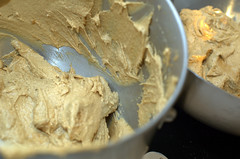 As a total aside, I often wonder how various people cook under pressure. Like when you realize that what you’re doing might not work out, or that you missed a crucial step in the process (not that it’s ever happened to me; goodness, no!) and are trying to add this step later, and you get all focused and tense, or maybe you just remain completely cool as a cucumber, or maybe you hum? Me, I become sullen, focused, quiet. I want to be left alone; I don’t want to converse. I just want to get through the bump in the road and get beyond it. I tend to scrunch up my nose and purse my lips and squint a lot. Did you envision that lovely visage? Yes, that’s me, trying to focus. Stunning, I know. 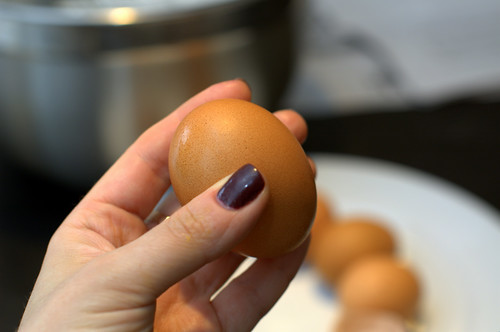 So, back to scaling and home kitchens and fun with all that. If you’re ever asked to do a larger-scale baking job, you should consider a thing or two. Like, the fact that you have a kitchen for home use. Or the concept of batches. Or the fact that perhaps even though you have a “Professional” strength mixer, your 5 quart bowl is anything but a professional size. Because you know, if you were um, say, a bakery, you’d be making dozens of cupcakes, not a mere dozen. And perhaps, you, dear readers, would have the foresight to consider all that, but lately, I’ve been in a whirl of work and travel I think my brain is full. I ought to sit down and think for a minute, but I don’t have that minute. Sigh. 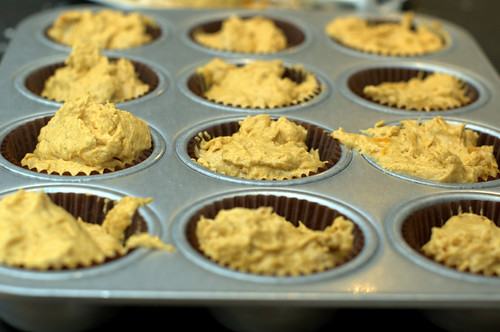 The other thing you want to make sure you’re good at, if you’re scaling a project like this, is multiplication and fractions. Now, fractions – I got this. In fact, I’m all over fractions, being that I work in finance. But if fractions ain’t your bag, get some help from a math-inclined friend, because when you are looking at 5/8 of a teaspoon measure of something and have to multiply it by three, that’s when you wish you really did pay attention in your math class. 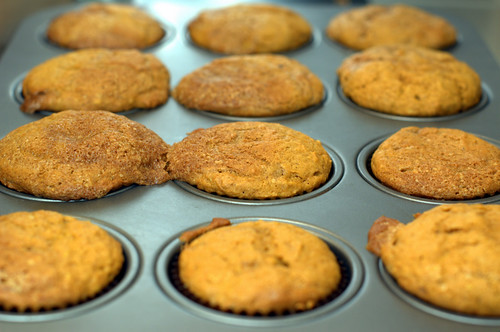 So how did I get to baking four dozen cupcakes in one sitting? Well, last weekend my friends Bill and Josey tied the knot, and I think my friends and I set some kind of a record for non-stop dancing at a wedding because that is pretty much all we did. And a few weeks prior to the wedding itself, Josey and Bill sheepishly asked me if I would make cupcakes for their rehearsal dinner. In response, I enthusiastically started to jump up and down. They took that as a yes. 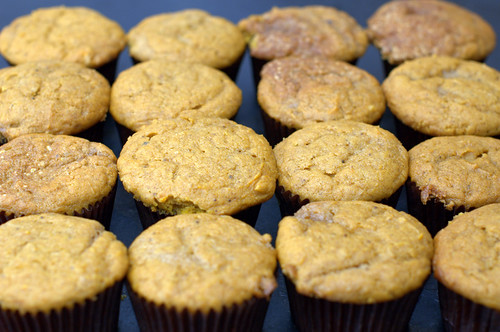 Because fall is full of amazing flavors and smells, I wanted to make cupcakes that would celebrate the season. And when I think of fall, I first think of pumpkin. I can’t go a block without seeing them displayed in stores, at farmers’ markets, on steps of brownstones (albeit the decorative pumpkins aren’t the ones you eat). I decided that I wanted to do a spiced pumpkin cupcake with a cream cheese frosting sweetened with some maple syrup, and thought (what naivete!) that I was being original and genius at creating something new. But when I excitedly wrote a friend about my new baking project, she responded, sounding a bit been-there-done-that “Oh like the cake David Leite made and Smitten refashioned into cupcakes?” 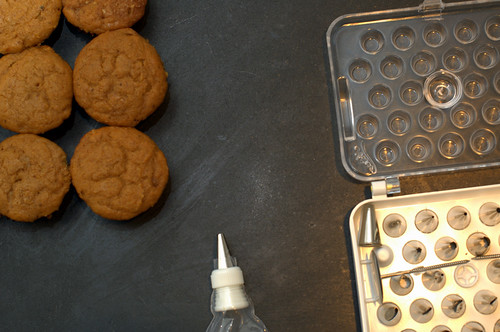 A few google searches later, I realized that my ideas were hardly original. And not only did Deb go ahead and make cupcakes, she piped the most beautiful roses on them as well. I’ve never piped any flower onto any cake or cupcake, so I watched the “how to” videos on YouTube ad infinitum. Please note: watching how to pipe roses and making them are two very different things. Which would explain for why my roses look out of shape and so, um, deconstructionist looking. I found that the cream cheese frosting was soft and was difficult to pipe, and my hand wasn’t used to making rose petals. If anyone can think of any tips as to perfect the matter (other than “practice, practice, practice”) I am all ears. But I do fear that I may just have to beg a bakery to take me under their wing for a week where all I do is play with frosting. 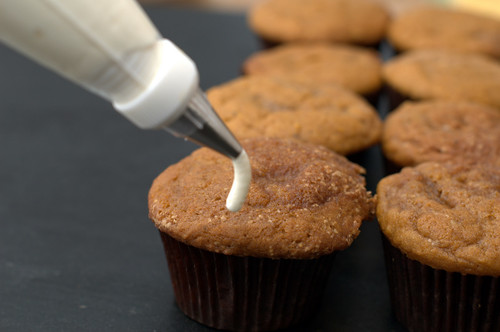 A word or two about batches. They are (or seem to me) key in home baking where you are working with smaller bowls and containers. If you were to take this particular recipes, I recommend the following: take the ingredients below, multiply them by 3 and then divide by 2 to get your 2 batches. That way you measure everything out exactly, and not eyeball it (like, ahem, some people here) which then necessitates a few Hail-Marys in hopes that your eyeballing was good enough not to wreck a batch of cupcakes. You can also weigh your ingredients and do batches that way, as Lisa brilliantly suggested to me last night. 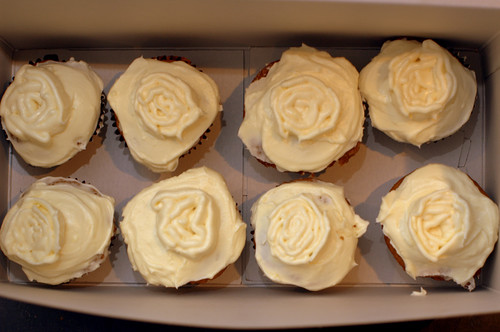 Also, for cookware, I seriously recommend having 2 muffin trays. I think 2 is not an unreasonable number to have and you will certainly need it at one point or another, so stock up accordingly. The ones I like you can buy either here or here. I generally shy away from dark colored non-stick bake ware and find this non-descript light metal work best. 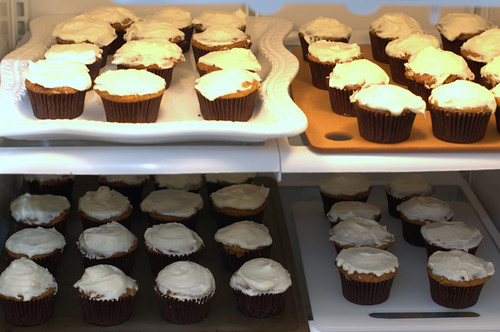 In the end, this is all non-tricky stuff. The cake batter isn’t finicky. The frosting comes together like a dream. It’s sort of an easy process, but if you do wind up making four dozen cupcakes, be sure to give yourself a day to do it. Piping flowers takes time and is much trickier than it looks. But if you know what you’re going in for, you are prepared, you remain calm and you emerge triumphant, with boxes of cupcakes whisked away to a rehearsal dinner or whatever event you’re making them for. Your forehead will remain uncreased; your nose – unscrunched; and instead of pursing your lips, you might even be smiling to yourself as you lick the frosting off your fingers.

2. In a stand mixer, beat the butter and sugars on medium speed until fluffy, about 5 minutes. Meanwhile, sift the flour, baking powder, baking soda, cinnamon, ginger, nutmeg, cloves, salt, and pepper into a medium bowl.

3. Add the eggs 1 at a time to the mixer, scraping down the sides after each addition. Alternate adding the flour and milk mixtures, beginning and ending with the flour. Beat in the pumpkin until smooth. Spoon the batter into the cupcake tray filling 3/4 of the way. Rap the filled pans once on the counter to release any air bubbles. Bake the cakes until a toothpick inserted into the center comes out clean, about 20 minutes. Cool the pans on racks for 10 minutes. Remove the cupcakes from the pan. Cool completely.

In a stand mixer beat all the ingredients on medium until fluffy. Frost the top of cupcakes, swirling decoratively. Chill for 10 minutes before piping roses. Pipe roses on each cupcake (someday when i am better at this, I’ll provide a tutorial!) Refrigerate the cupcakes for 30 minutes to set up frosting.