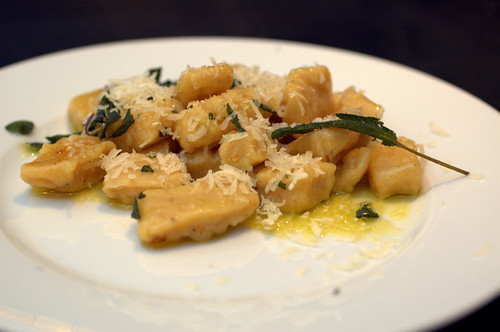 It is customary, when making something for the first time, to start with the basic building block and build on out from thereon. I, on the other hand, like to raise the stakes a bit. Normally, you’d start with plain gnocchi to get a feel for it, learn how to get them just right before trying a variation. And even though making gnocchi was on my to-do list for quite some time, I fully got on board to make them only after seeing the October Gourmet recipe listed as Ruth Reichl’s Top 10 recipes in the issue. They were sweet potato gnocchi and I pretty much find sweet potato anything irresistible. There was just one catch – gnocchi is one of the dishes that for some reason scared and intimidated me. Hence the reason I haven’t made them yet. 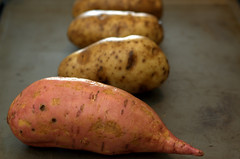 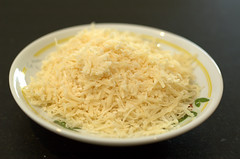 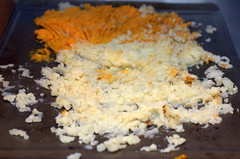 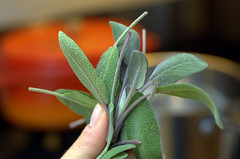 But surely, you must remember what I said to you about fear and conquering it? Well, I decided to put my money where my mouth was and tackle that which made me nervous. If I tell you to be bold, shouldn’t, myself, adopt the very mantra I seemingly espouse? 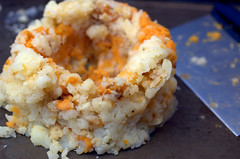 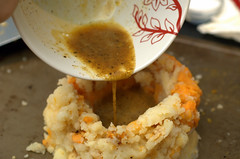 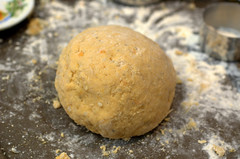 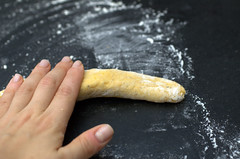 Where do I begin with gnocchi? My love for gnocchi goes beyond words. Made properly they should be like little clouds of goodness, whisking you away upwards to the sky. Made poorly, they’re heavy clumps of dough that stick to the roof of your mouth. In between, they’re perfectly palatable, but once you’ve tasted amazing ghnocchi, that’s pretty much all you think about when you’re eating the so-so ones. 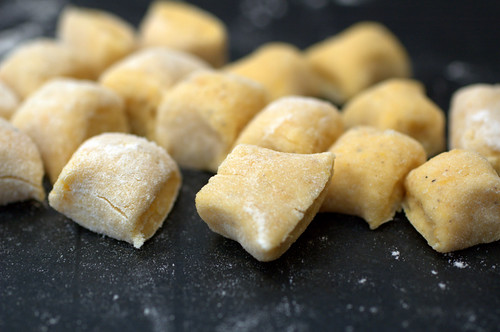 It’s the kind of dish that makes me think: one false move, and it’s ruined. I suppose while something like stewed prunes is impossible to run into the ground, a dish like gnocchi takes practice. You get a feel for the dough, its consistency. You’ll know immediately if needs more flour, or if your potatoes aren’t dry enough. 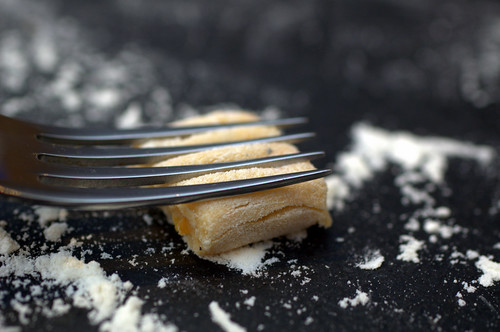 Because these gnocchi are made with sweet and regular potatoes, and there are a few things I’ve learned that I’d like to share with you. First, is that it’s very important to use the right potatoes – Russets have a high amount of starch and lower amount of water, compared to their other spud cousins – and that’s exactly what you want – a nice, starchy potato. Sweet potatoes, however, are much more moisture-laden, so next time I make these, I will cook the sweet potatoes a wee bit longer to dry them out a bit more. Having more moisture in your dough will yield a more doughy gnocchi – and what you’re after are little clouds of goodness; sweet potato goodness, no less! 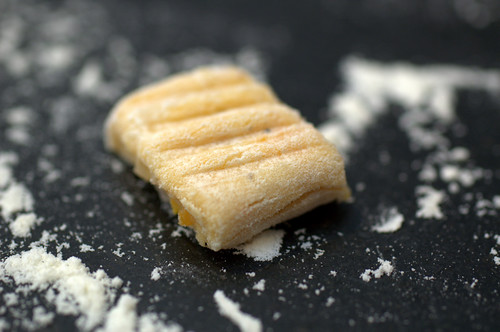 I chose to serve these in (what else?) a little brown butter (because I can and I will) and olive oil sauce where you slightly brown the gnocchi after boiling them, and sprinkle a bit of fried sage and shaved Parmiggiano Reggiano and some freshly ground black pepper. And when I finished my plate and used some bread to absorb some of the residual brown butter sauce, I once again was amazed at how incredibly sublime simple food tastes.A few ingredients, a little time, a hungry me. For that kind of bliss, I’ll raise the stakes any day! 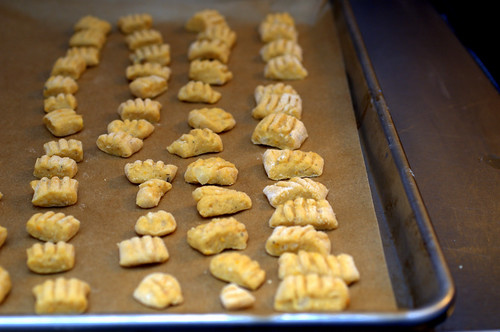 Quick note:
Here as Sassy Radish, we’re doing a little bit of maintenance and will be migrating over to a new platform (shhhh, that’s all I can tell you, but trust me it’ll be awesome when it’s done!). So, if things are a little wonky here, please be patient! When all is said and done Sassy Radish will be snappier and sassier and have more functionality than ever before.

a potato ricer or a food mill fitted with fine disk

2. Pierce russet and sweet potatoes in several places with a fork, then bake in a 4-sided sheet pan until just tender, 45 minutes to 1 hour. (Maybe you might want to cook the sweet potato a bit longer? Because it’s got more moisture than those starchy russets, so more liquid means doughier gnocchi? I’ll have to experiment, but these are my preliminary thoughts based on one attempt.)

3. Cool potatoes slightly, then peel and force through ricer into sheet pan, spreading in an even layer. Cool potatoes completely. (I did mine with a fork. And in retrospect I think a ricer would have been key.)

6. Gather potatoes into a mound in sheet pan, using a pastry scraper if you have one, and form a well in center.

7. Pour egg mixture into well, then knead into potatoes. Knead in cheese and 11/2 cups flour, then knead, adding more flour as necessary, until mixture forms a smooth but slightly sticky dough. Dust top lightly with some of flour.

8. Cut dough into 6 pieces. Form 1 piece of dough into a 1/2-inch-thick rope on a lightly floured surface. Cut rope into 1/2-inch pieces. Gently roll each piece into a ball and lightly dust with flour.

9. Repeat with remaining 5 pieces of dough.

10. Turn a fork over and hold at a 45-degree angle, with tips of tines touching work surface. Working with 1 at a time, roll gnocchi down fork tines, pressing with your thumb, to make ridges on 1 side. Transfer gnocchi as formed to baking sheets.

1. Heat oil in a 12-inch heavy skillet over medium heat until it shimmers. Fry sage leaves in 3 batches, stirring, until they turn just a shade lighter and crisp (they will continue to crisp as they cool), about 30 seconds per batch. Transfer to paper towels to drain. Season lightly with salt. (When you first place the leaves into oil, they’ll sizzle and make happy crackling noises, and as they cook, the noises will subside. When you feel like sage has “calmed down” you can fish it out. It’s pretty much done.)

2. Fry chestnuts in 3 batches, stirring, until golden and crisp, about 30 seconds per batch. Transfer to paper towels to drain. Season lightly with salt. Reserve oil in skillet. (I omitted chestnuts because I wanted to use the fresh ones, but ’tis not yet the season for them. Next time, I promise!)

1. Add butter to oil in skillet with 1/2 tsp salt and cook until golden-brown, 1 to 2 minutes. Remove from heat.

1. Add half of gnocchi to a pasta pot of well-salted boiling water and stir. Cook until they float to surface, about 3 minutes. Transfer with a slotted spoon to skillet with butter sauce. Cook remaining gnocchi in same manner, transferring to skillet as cooked.
2. Heat gnocchi in skillet over medium heat, stirring to coat.
3. Serve sprinkled with fried sage and chestnuts and grated cheese.

Notes:
Uncooked gnocchi can be frozen (first in 1 layer on a baking sheet, then transferred to a sealable bag) up to 1 month. Do not thaw before cooking. If freezing gnocchi, you might want to half the sauce.