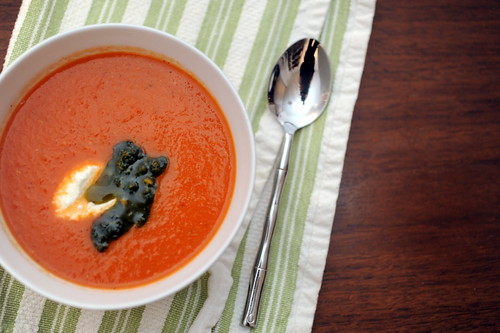 All right, all of you with canned tomato soup in the pantry. You know who I’m talking to and if it’s you, step forward. Don’t be afraid; we’re just going to have a little chat. I promise I won’t single you out, but I want to show you something that might just change your tomato-soup-eating ways. It’ll take just a few more minutes than reheating that sad, thinned-down, canned version, and instead, you will luxuriate in quite possibly the most tomatoey tomato soup ever. And I don’t throw such superlatives lightly. 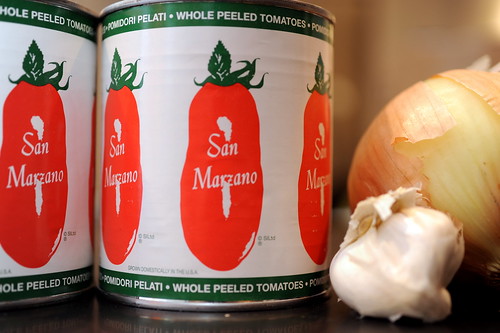 I owe this soup to my friends Jane and Geoff, mainly Geoff, for the soup is his creation. I tried this soup first when Jane and I were getting ready for a girls’ movie night, and soup was a nice, warm meal to carry us into the chilly evening. We had just had our first snowfall of the season, and it left behind tall snow banks as well as a few icy patches here and there. Soup was the prudent, practical dinner choice before heading out into the cold. But, you know, tomato soup isn’t exactly a dish one loses his mind over. It’s well-loved and is comforting, but doesn’t exactly command a mad legion of obsessed fans, unlike, say a good New England clam chowder does. So I was happy to eat this soup, but I had no idea what was in store for me. 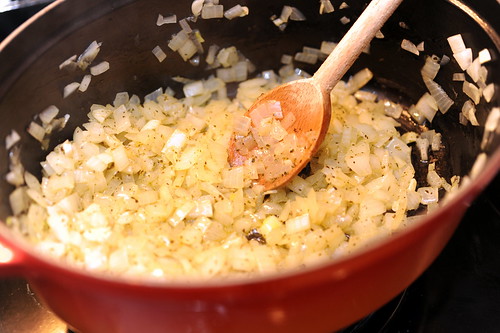 Let’s just say my taste buds did a serious double-take. The clean, intense, undiluted taste of tomato was not what I was expecting. With the first spoon, I was hooked. And by hooked, I mean obsessed. And when I say “obsessed”, I mean I’ve been craving this soup nearly daily for a few months now, but kept forgetting to ask for the recipe. It took getting sick last week and being miserable and grumpy to ask Jane and Geoff for the recipe – I had to have this soup, or else. Grumpiness would ensue for days. Because I don’t get sick often, I turn into a total baby when it actually happens. All I want to do is like on the couch with a blanket and reruns of Law & Order on the television, pout and eat tomato soup. In that order. Normally, I settle for take-out because when I’m sick, I don’t exactly miss cooking. But this time was different. This time, my craving was stronger than my laziness. Besides, this so easy to make, I had no excuses, even with my Rudolph-red nose. 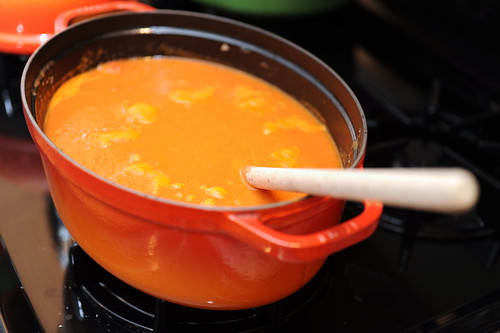 I know – we are busy bunch, especially during the weekdays. Work, family, social events – our lives are planned weeks in advance; we are hungry, run-down, and desperate for more daylight. We want to be warm, we want to be comforted, and some of us (ahem) are still trying to whittle away that tart we indulged in not-so-long ago that has mysteriously glued itself to our thighs and just plain refuses to leave (the nerve!). This is, and I can’t believe I’m actually writing this because this is so not what this site is about, also quite healthy. And delicious. And simple. And comes together in a pinch (a half-hour pinch, to be exact!) with the ingredients that are most likely already stocked in your pantry. While the soup is simmering, you’ve plenty of time to change into your favorite fleece pants (what, no one else besides me has a love affair with those?), pour yourself a glass of wine and settle into your evening. 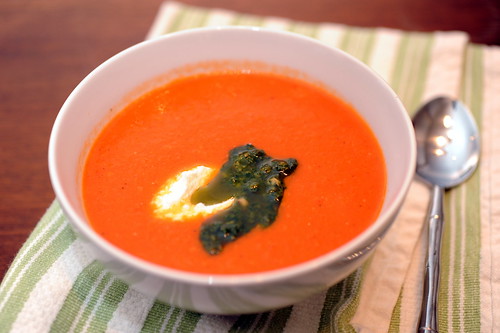 Once the soup cooks a bit, quick whir of the immersion blender (seriously folks, far be it for me to tell you what a must-have item is, but really, if there is such one thing in the kitchen, the immersion blender it the it-gadget to have, promise!) and you have a velvety smooth, hearty, filling soup, perfect on its own. But, since I’m a girl who loves her accessories, I like to dress mine up with some good ricotta and swirl (or as the picture shows, a lump) of pesto. It look so festive and wintry and pretty in your bowl – kind of like Christmas all over again. But in February. So much the better. 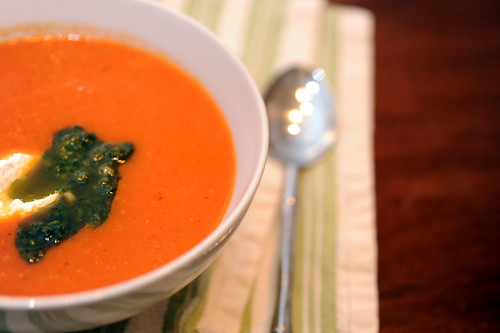 2. In a tall heavy-bottomed pot, add tomatoes and the stock. With a wooden spoon, squish the tomatoes down against the wall of the pot. Stir in basil. Bring to a point where the soup is almost boiling and reduce heat to low. Simmer for 30 minutes to let the soup thicken.

3. With an immersion blender, blend the soup until all the tomatoes are pureed and the soup is has a smooth consistency.

4. Season with salt and pepper and serve, garnished, if you like with a dollop of ricotta and a swirl of pesto.