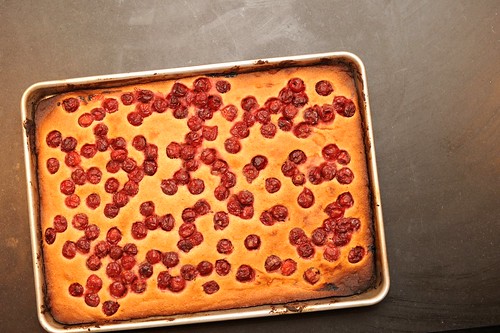 Well, thank you, dear friends, for such an lovely outpouring of support and enthusiasm! The comments, the emails, the tweets! You are too good to me! I remember the amazing support almost two years ago when I took a little time off and even though it was a tough time for me, your comments and emails made feel really loved and connected to this lovely web of people somewhere out there, reading, and actually caring. Thank you for coming here, and thank you for staying here. I can’t wait to share more of my “hunk” with you! 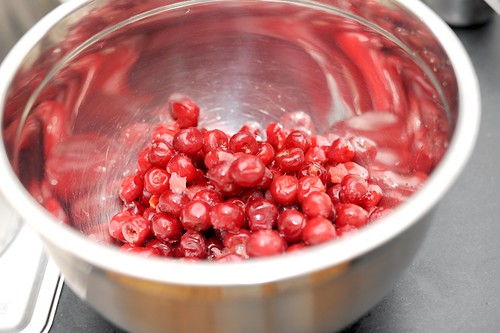 Considering how lovely you have all been, it seems terribly unfair of me to tell you about sour cherries when they’re done for the season, and all you can really do is just stare at these pictures and bookmark the recipe in hopes of remembering next summer (don’t worry I’ll remind you!). Except, this cake was so good, I just couldn’t let it languish in the depths of my computer for a whole year – it was going to get lonely and would need some company. Besides, I know some of you are quite the industrious types, and probably froze your sour cherries like I did. I do this with cranberries every November. I buy a half a dozen bags and stuff them in the freezer and then make boozy banana bread studded with those gems. Next year, you should do the same with sour cherries. This cake could come in handy on a cold, rainy day when you want to hang out in your house and bake. 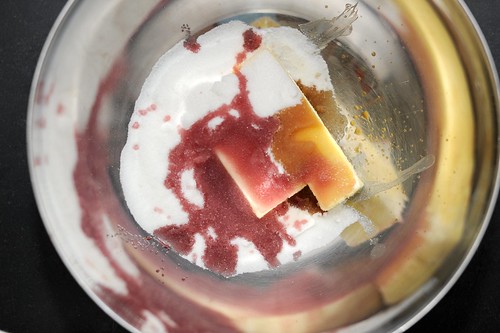 Whether or not you froze them this year, I wanted to tell you about this cake so much, I simply couldn’t wait a year. All that excitement of the moment just might fizzle, and excitement is a terrible thing to waste. I bought these cherries in the eleventh hour of the sour cherry season, at a stand at the Union Square Market. The stand appeared to be the only one selling sour cherries, and upon spotting it, I let out a little squeal. I had plans, friends, for these babies. These cherries were going to be baked into a pie that inspired me not just by its lovely top crust design (aren’t circles pretty?), but also by the pre-baked bottom crust (genius!). I had the recipe printed and stuck to my door. I even had a pie crust skulking about the freezer. But then I spied this little winner of a recipe at Saveur and could think of nothing better for these sour cherries than finding themselves surrounded by a whole wheat thin layer of cake. They would look so pretty scattered around. 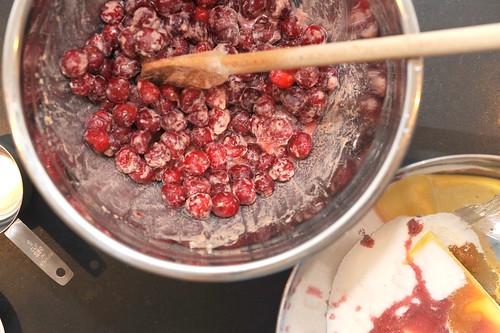 Some of you might still be wondering what is the big deal about sour cherries. Most of you wondering that have probably never tried them. It’s difficult to put into words what sour cherries are like. My best description of them goes a little something like this: a sour cherry is what a sweet cherry aspires to be. Don’t for a second think that I’m downplaying the glory that a sweet cherry is. But that tart zing, the opalescence, that gentle yield to the touch, the ephemeral, fleeting season – a sour cherry is something of a treasure. Blink – and you’ll miss it. 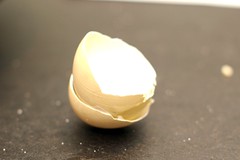 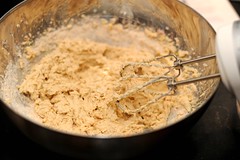 We had them abundantly in the summer in Russia, upon our arrival to the US, they were nowhere to be found. Of course, I was too busy lamenting my introduction to Nutella (while we were in Italy) and its absence from the American supermarket shelves to really notice or care about sour cherries’ absence from the produce landscape. It wasn’t until a few years later, when my family and I went to visit their friends in Ann Arbor, Michigan, and took a road trip through the Michigan countryside, that I rediscovered sour cherries again. There were numerous stands by the side of the road offering travelers pints of sour cherries and freshly hot-smoked trout. To this day, one of my favorite meals remains this trout, mixed with cold, boiled potatoes we brought with us on the road, and sour cherries for dessert. I had forgotten how tart and delicious they were. 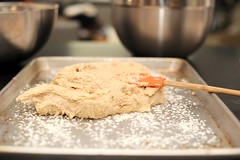 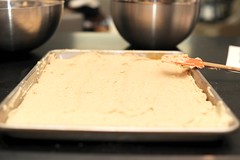 When I finally got around to my batch of frozen and pitted cherries, I was feeling rather bold, and decided to give the recipe a major overhaul, swapping out enough ingredients to create a recipe distinctively different from its original creation. I still credit Saveur with the inspiration, which goes a long long way. I decided to stick with wheat flour and only wheat flower; I scaled back the sugar, because I always prefer my everyday cakes to err on the less-sweet side. Out went the kirsch, and in went creme de cassis – I’ve got nothing against kirsch, but I wanted something with a more berry-like zing, and creme de cassis sings so beautifully in desserts. Have you ever had creme de cassis? Smelled it? It’s intoxicating – I am always tempted to pour a bit over a “boule” of vanilla ice cream, because it’s really one of the best things ever. And also, in the spirit of full disclosure, I realized I was flat out of kirsch, and felt a bit lazy having to walk over two whole blocks while all my ingredients sat neatly in a mise en place. In my last throes of creativity I decided to use buttermilk instead of regular milk the original recipe called for. I find that buttermilk yields a more tender crumb in a cake, and who doesn’t like a tender crumb? 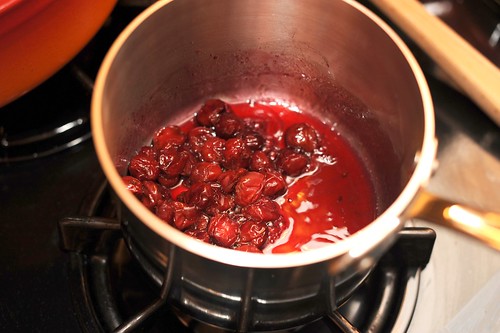 This is a hearty cake – the whole wheat gives it heft and body, and the berries make the batter shine. But here’s the rub – this cake would be a perfect breakfast cake over coffee on a crisp, rainy fall day. So, don’t despair if sour cherries are out of season, throw some blueberries in it. Or, I wonder, how will this cake taste with some thinly sliced apples, sprinkled with cinnamon? I bet you it’ll be perfect. You really can’t go wrong! 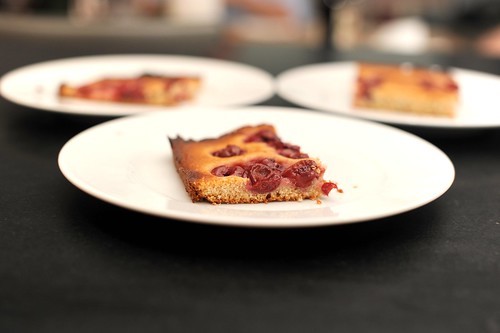 I made this a week ago and a bunch of us, my plus one included (should I tell you his name?) ate it for dessert and there was still lots of the cake left over, (this makes a lot of cake, so be sure to invite friends over!) and then (and this part here is tragic and my lower lip quivers as I type this), then we forgot about the cake and it sat in the fridge for over a week until I discovered it again, but by then it had gone bad and needed to be tossed. But I can’t bring myself to do it. Sour cherries! I worked so hard for them! All the pitting and freezing and unfreezing! Sigh. I’ll have to dispose of the cake tonight. Most likely with a proper burial, followed by moment of silence. And perhaps a somber song or a poem. 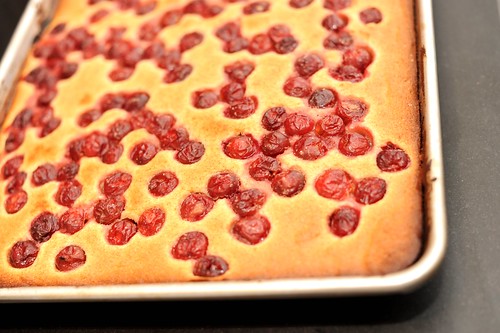 Take a 13x18x1 baking sheet and grease it with butter. Dust with flour and set aside.

In a large bowl, using a hand mixer on medium speed, beat together the butter, sugar, creme de cassis, and vanilla until pale and fluffy. Add egg, and beat until incorporated. Do not over-mix.

In a medium bowl, whisk together the remaining 2 1/4 cups flour, baking powder, and salt. With the mixer running on low speed, add flour mixture alternating with buttermilk in 3 batches. Spoon batter onto the buttered and floured baking sheet and smooth evenly using an offset spatula.

Check on your cherries – if too much liquid collected at the bottom, drain first. Sprinkle cherries over the top. Bake until cake is golden brown 45–50 minutes (though my oven runs hot and the cake was done in 41 minutes).

Cool the cake on a baking rack and then cut into squares. Serve at room temperature.