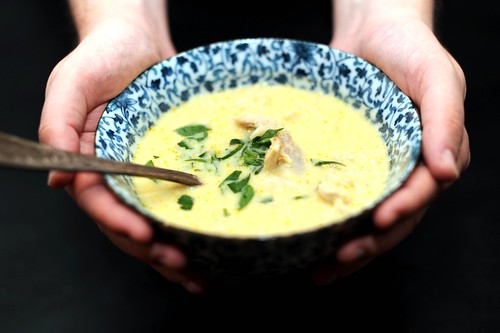 This is Andrew’s favorite soup and it took me six months to make it. You would think that as his girlfriend I’d feel compelled to rush to the kitchen to make his favorite things to woo him, but apparently I’m obstinate and run on the over-promise and under-deliver campaign. I am easily distracted and seasonal foods are the equivalent of ooh-shiny-what-were-we-talking-about-again? Andrew has been lovely and patient, acting as an obedient guinea-pig and sampling whatever dishes strike my fancy at a moment’s notice. Might it be because he knows which side his bread is buttered on? Possibly. But either way, he’s been lovely. 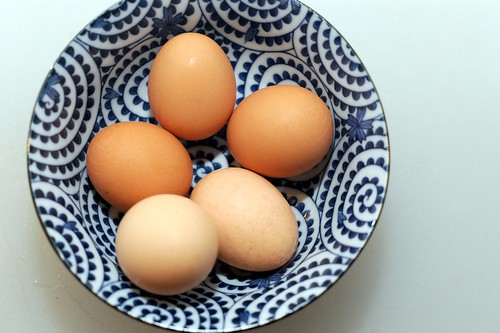 In discussing our favorite dishes, Andrew told me about this Greek diner in Boston he’d go to with family, and the diner would make this amazing Greek chicken lemon soup. I’ve heard of avgolemono soup, but I’d never had it before. The premise: chicken stock, intensely infused with lemon juice and thickened with eggs, sounded at once comforting, luxurious, and refreshing (with lemons how could it not?). But because I’ve never eaten it before, how would I know a good recipe from a dud? It’s one thing to make your boyfriend’s favorite dish that you have mastered, but a totally different one to venture into the terra incognita. You don’t want to fall flat on your face, and while you want to wow and impress, you, the you with a day job, also might not have the time to run all over New York (or wherever you happen to live) and sample avgolemono in a dozen different locations. 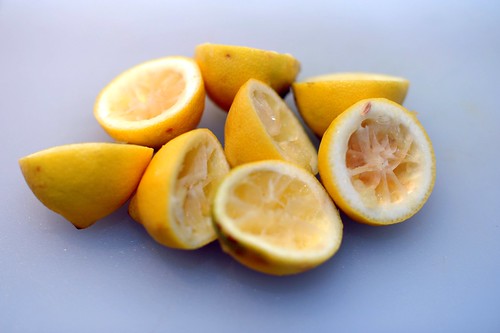 But over the past month, I have looked at many an Avgolemono recipe in preparation for Operation Boyfriend’s Favorite Soup, and realized that you can tell, by reading through a recipe, if it’s going to be a good soup. Maybe not the exact replica Andrew was used to, but a tasty bowl of soup nonetheless. After reading through over a dozen or so recipes, I could tell which version produced what. Some recipes came across as inadequately lemony (you need more than one lemon for a whole pot of soup to bear its name); some as too watery (quarter cup of rice does not exciting soup make); some as skimping on the chicken itself, if not avoiding it all together. From my research, I learned that classic avgolemono, should typically contain some rice and offer noticeable chicken presence. Since you’re eating chicken soup, it follows that you should see chicken meat in your bowl. The soup should taste rich, but not overbearingly thick or heavy. If you want your soup to be less filling, adjust your chicken accordingly, but if you prefer to have a meal instead, chicken meat should have its own spotlight. 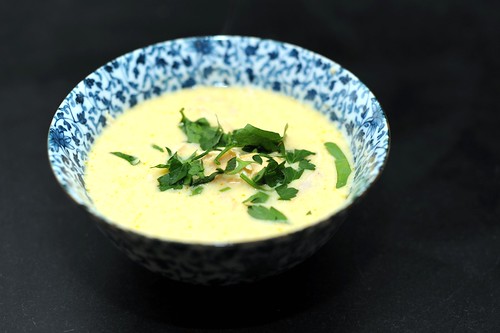 The soup gets better the following day, as the flavors meld together and grow more intense. I had it for lunch yesterday and thought perhaps I might be unduly flattering myself. But Andrew, who also had it for lunch at work, noted the same, which makes me think that perhaps there’s something to the better-the-day-after theory. Unless, he is just flattering me and it’s some kind of a Jedi mind trick so that I make this soup soon again and not wait another six months. If it’s the latter, this is nothing short of brilliant strategery* on his part – flattery will get you everywhere.

Avgolemono Soup
cobbled together from about dozen places

Combine the chicken, broth, and salt in a large saucepan. Bring to a boil, skim the surface scum off, lower the heat, and cover the pan, letting the soup simmer for 45 minutes or until it is cooked through.

Remove the chicken from the liquid. Ladle a little of the broth into a bowl and leave to cool.

Meanwhile, bring a large saucepan of salted water to a boil and cook rice according to the package directions. Set aside.

Skin about 1/2 of the chicken, and cut the meat into 1/4-inch pieces, discarding the bones; set aside.

Return the broth to a boil. Add the cut-up chicken and simmer for 2 minutes. Remove the pot from the heat.

Using the same method of whisking gradually, whisk the egg mixture into the pot of soup, stirring constantly. Return the soup to the medium-low heat and cook, stirring constantly, for 1 to 2 minutes or just until the mixture thickens slightly. Be sure not to let the mixture bubble, even at the edges. Add the rice or orzo and stir well.

Ladle into bowls and sprinkle with parsley.

Serves 6-8, depending on how much soup you like to eat.