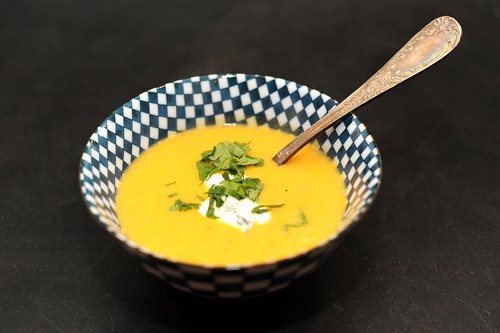 We got back from London, and I promptly came down with one of those post-long-plane rides colds. At first, it was kind of fun to have a sexy rock-star voice, but when it quickly deteriorated into lower octaves, I started to sound like I’ve been drinking for thirty years. The sexy was long gone, and I just wanted my regular high-pitched, I-still-sound-like-I’m-thirteen voice back. That, and the ability to finish a sentence before erupting in a coughing fit.

I don’t know about you, but when I get sick, unless I’m running a serious fever, I don’t sit still. I don’t wrap myself in blankets, make residence on the couch and watch countless Dr. Who re-runs unless I am nearly dead to the world and have resigned to Gatorade and saltines. (By the way, the new Dr. Who is just not doing it for me. Just wanted to share that.) Something about being sick coupled with a desire to be constantly moving about sets me in motion. And makes me want to make soup. And to be precise – pureed soup that tells me that autumn is here, and it’s high time for squash. 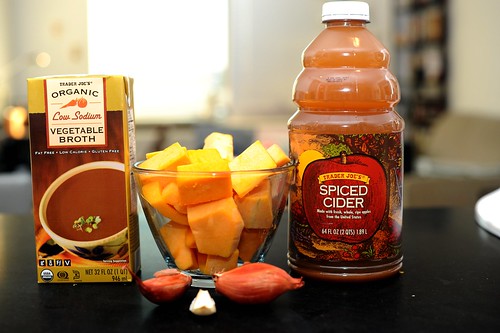 This soup comes from a highly-anticipated book – The Essential New York Times Cook Book written diligently and thoughtfully over the last six years by Amanda Hesser. The Amanda Hesser of the Cooking for Mr. Latte and The Cook and the Gardener fame, among others. Years ago, when I was reading chapters of “Cooking for Mr. Latte” in the Sunday Magazine, I would imagine myself falling in love and winning over my future husband with one meal at a time. I imagined myself jettisoning my job, packing a suitcase and moving to France to attend La Varenne. The stories always sounded so lovely, and I liked to imagine myself in them. It was the ultimate romance: love through food and stories around it. So many of our memories are shaped by what we eat and who we eat with, even if a meal is just with yourself. 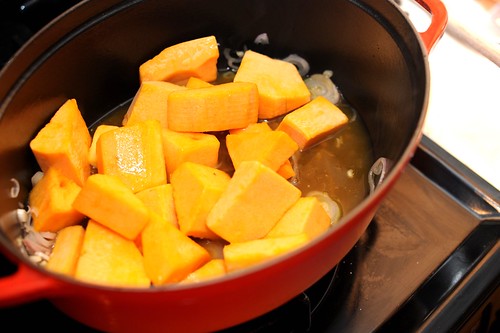 I am so very grateful to the that same thoughtful soul (you know who you are!) who sent me the fantastic Melissa Clark and Bill Yosses book for sending me a review copy of this expansive tome. It was on my list of books to own and it is an absolute treasure. Painstakingly curated and lovingly put together, this book is encyclopedic in its scope with recipes dating back to 1880’s, comprehensive, and thorough. But beyond its offerings, it’s like a treasure trove of history – stories told through recipes of how this country has evolved in what we eat, and consequently what we might be concerned with: sustainability, health, frugality, or excess. There are dozens of recipes I’ve noted and set aside. I will be cooking from it for decades. 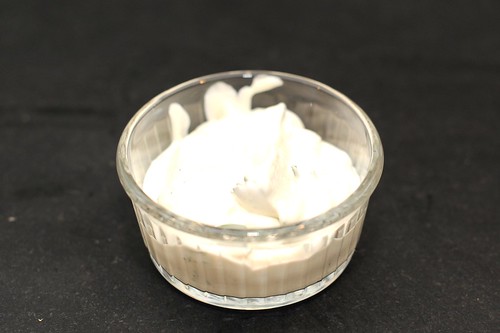 I tweaked this soup quite a bit because I like to play with some spices in my squash, so I added some cumin, cinnamon, and cayenne. And I wanted to make the squash taste more um, should I say “squashy”, so I added a tiny bit of lemon juice just to brighten the flavor just a bit. I took out the apple garnish, adding instead some cumin-spiced sour cream, which can be swapped for crème fraîche or yogurt, if you like, and sprinkled a few cilantro leaves on top. But, darlings, the cider! The cider was bold, pronounced, and unexpected. On the one hand, there was an unmistakable taste of apples and fall, but on the other hand, the apples gave way to more savory flavors of the squash playing a supporting, rather than a leading role. It’s soup that is at once inspiring and comforting, bold and subdued, celebratory and casual. And it’s perfect for those evenings when you’ve all but lost your voice. For if you cannot exclaim out loud the admiration for the soup, your empty bowl will be declaration enough.

1. In a medium saucepan over low heat, add shallot, garlic and 1/4 cup vegetable broth. Cook until the shallot and garlic are softened, being careful not to burn them, 3-5 minutes. Add the squash and the remaining vegetable broth and bring to a boil. Add cinnamon, cumin, and cayenne. Reduce the heat, cover, and simmer until the squash is soft, about 20 minutes.

2. With a potato masher, press the squash down until semi-pureed, then add the cider and with an immersion blender puree the soup until smooth. Add the sour cream and the salt, and continue to puree. If soup looks too thick, you can think it down with more broth, if you have any on hand, or with more cider. Continue to taste. Add 1 tablespoon lemon juice and stir – this should make your butternut squash more squash-y tasting, if you can believe it.