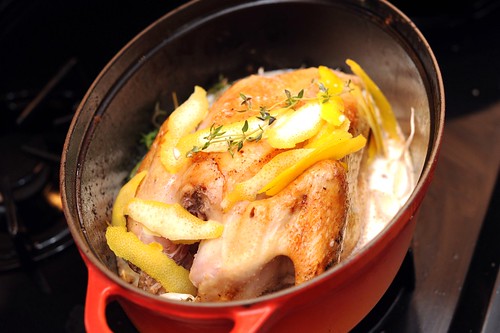 I swear I didn’t plan this on purpose, but it’s fitting that today’s post is about chicken braised in milk – a recipe from Jamie Oliver. I made this dish awhile back in the spring, right about when temperature turned from crisp and cool to hot and sticky. We woke up one morning – and it was sweltering outside. There was no ramping up – overnight, summer arrived and it seemed ill-timed to serenade anything braised for at least a few months. I put the recipe aside, but vowed to tell you about it first chance I got. Print this recipe and tuck it away somewhere where you can easily find it. It’s going to be a staple for you this winter. I promise you.

The irony of the timing of this post isn’t lost on me either. Less than a day before we depart for vacation in England (a few days of London followed by a couple of days in the countryside), I give you a recipe by one of the country’s most celebrated chefs. I didn’t plan on posting this particular recipe right before our UK sojourn – it just soft of happened. I’ve never properly been to London, outside of business trips and whatnot, so the only way I’ve experienced London before was through the windows of a taxi – not particularly thrilling, to be honest. But this time, it’s all about seeing friends, eating amazing English food, stopping by a pub in the afternoon for a pint or two. We can’t wait. We’re very much overdue for a vacation. 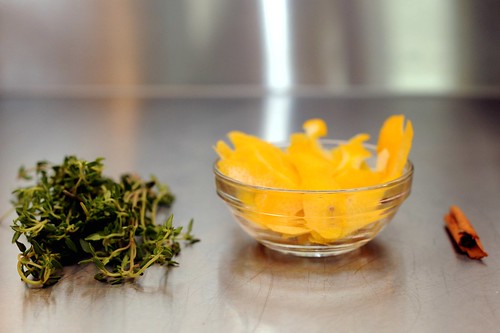 And a word about English food. Somehow, the stereotype that English food is terrible still persists, and it makes me so mad because it’s simply not true. English food is simple, comforting and elegant – without pretense or hyperbole. It’s the kind of food you want to eat right about this time of year. It’s unfussy and welcoming. It doesn’t belabor the point. Maybe years ago, British food was terrible, in the same way American food was terrible. But that’s no longer the case, American food has had a remarkable Renaissance, thanks to chefs like Alice Waters, Dan Barber, and lots of others. Same goes for British food. To be fair, there’s lots of terrible food around us everywhere. Bad food isn’t hard to locate. You can have a terrible meal in France (it’s easier than you think!), Italy, or Spain. You can have terrible food in New York City, San Francisco, Chicago, and other gastronomic centers of the country. And we all know that a lot of Europeans still think of American food as a hybrid of prepackaged foods, pizza, and McDonalds. Anyone who’s ever been to Times Square in New York knows that terrible food is all around us. Finding good food, food made carefully, lovingly, thoughtfully, with respect for the ingredients – takes some work. But it’s work that can be handsomely rewarded. Which is why after doing much research and asking some lovely folks about their recommendations, I’ve made a few reservations and I can’t wait to try them. I’ll have a full report when I’m back. 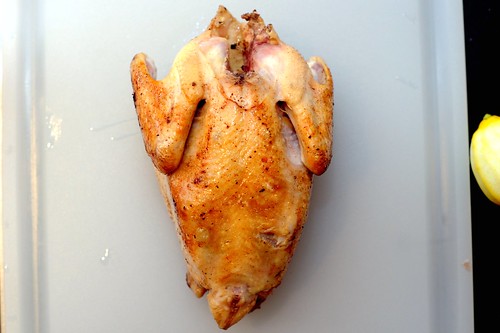 But more on this chicken. This recipe is sort of the recipe blogged round the world. If you’re unfamiliar with Jamie Oliver you should take the time and get to know him. You might have seen his show – Jamie Oliver’s Food Revolution where he tried to get West Virginia school children to eat whole foods: including fruits and vegetables. Jamie is on a mission to get us all to eat real food. Whole ingredients. One recipe at a time. You can’t really argue with his motivation – it’s all wonderful stuff. I could go on and on about his projects, but really, you should just go and buy a book of his. Any book. You won’t be steered in the wrong direction, and my guess is you’ll return to buy a few more of his books. Jamie gives you tools to make serious food, minus the preciousness of it all. It’s food you want to take a bite out of: like this one. 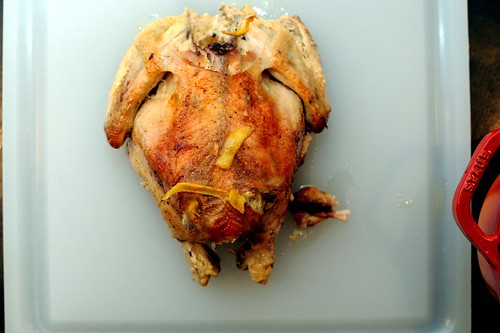 One of Jamie’s postulates is that anyone can cook good food. Anyone. Just get a few quality ingredients, and let them stand on their own. And he does it here with this braised chicken. Simply put, you throw a few ingredients in the heavy bottomed pot, add the chicken, and let the whole thing just sort of do its thing. What I love is that left to its own devices, the chicken and the milk along with a few aromatics, fuse together to form something that while looks pretty pedestrian and earthly, yields you something elevated and ethereal. It’s a little bit of a rabbit in a hat trick, except there is no gimmick. The result of a few quality ingredients, left alone on low heat to ponder their fate, produces stunning, show-stopping results. After the first bite, I had to put my fork down and exhale – it was that kind of delicious. And I expect us to eat this well all throughout our trip – the English food I know has always been one of my favorite cuisines. We are coming hungry – London and Kent, you best be ready for us.

Preheat the oven to 375°F and find a snug-fitting pot for the chicken – I find that my 5 1/2 quart cocotte is perfectly suited for this.

Wash and pat dry the chicken. Season it generously all over, and fry it in the butter and a glug of olive oil, turning the chicken to get an even color all over, until golden. You will thus turn the chicken 4 times. While your chicken browns on all sides, prepare the other ingredients – you’ve been given perfect time for that.

Once the chicken is brown all over, remove from the heat, and put the chicken aside on a plate. Much as it will pain you, throw away the oil and butter left in the pot. You don’t need it anymore. But what you’re left with, at the bottom of the pan, is what Jamie refers to as this “tasty sticky goodness”. This “goodness” will give you amazing depth of caramelly flavor.

Place the chicken back in the pot along with the rest of the ingredients, and cook in the oven for 1 1/2 hours. Periodically, if you wish, baste with cooking juice.

The milk cooks down to this lovely, creamy sauce that’s accented by the lemon zest and is just about one of the most luscious, decadent things. You should serve the this chicken with the sauce along some beautiful fingerling potatoes. Or a panzanella salad!

To serve, let the chicken cool a few minutes, and pull the chicken off the bones, dividing it among the plates.