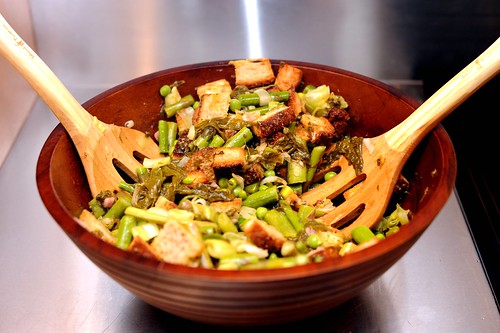 Last night, amidst the oppressive heat and a fierce sugar craving, I stole away for some ice cream. I was lamenting to my friend Tina, online, that I wanted some ice cream, but having eaten it all, there was none in my freezer and it was too late to commence making my own. Thus, I was resolved to be wistful and unsatisfied. I might have even pouted, not that there was anyone to witness it. For the record, I pout with distinction. I’m quite excellent at it, but when no one can appreciate the pout, it is a bit of a waste. But this is the thing about friends, dear readers, is that they are great partners in crime and not twenty minutes after I issued my complaint, this friend and I were sitting in our local dessert mecca happily spooning away our desserts: me – with my simple scoop of vanilla and she with her warm brownie sundae. For awhile, neither one of us said anything – we were consumed by our dessert. It hit the spot, for certain. 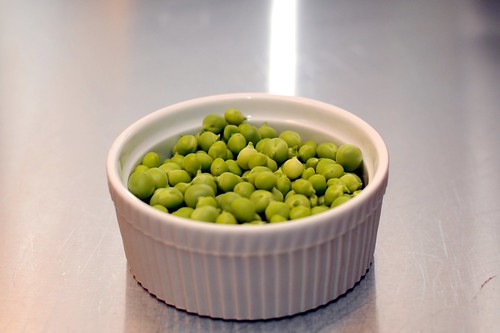 What I was supposed to have been doing, however, was sitting at home, and writing about this panzanella – and about how you must go ahead and make it. But I’m a creature who is controlled by my food cravings, and as such, I was poking at my keyboard without much success. Who wants to write about day-old bread and asparagus and sorrel and peas and leeks no matter how delicious when a few blocks away, cold and creamy dessert awaits you? Clearly, you see my dilemma. 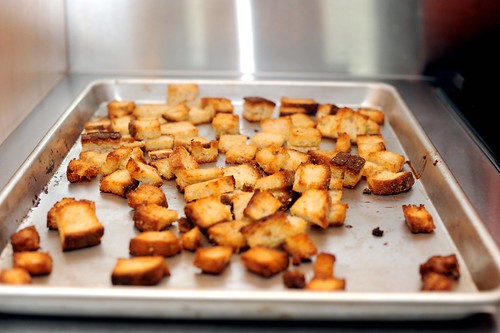 The other thing was that I wasn’t really sure what to tell you about this panzanella other than – oh Lord, almighty, this might be one of the most lovely things to come out of the spring kitchen this season, nay period! I made enough for six people and the three of us polished off the whole thing, without nary a crouton left behind. It was a good lazy Sunday supper and we drank some excellent white wine to break the heat and usher in summer weather. This was the same Sunday supper we dug into some awesome cake, so kitchen muses smiled upon me that Sunday afternoon and allowed me to make some good, unfussy food for friends. The day before, I went to the Prospect Park farmers market and went a little crazy scooping up every possible in-season thing I could get my hands on. Asparagus – check! Leeks – check! Fresh sugar peas – also check! And sorrel – I nearly lost my mind. I’ve this soft spot for sorrel and hope that it gains wild popularity in the US. We ate a ton of it in Russia in the summer months – a sorrel soup still happens to be one of my favorite summer meals. If you’ve never had sorrel, I implore you to go and seek it out. It looks like a slightly lighter version of spinach and it’s got a nice sour bite to it. 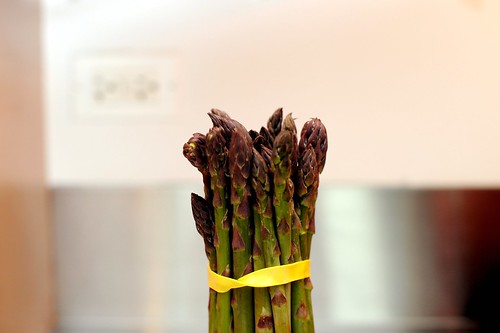 You can cook it just like spinach too, and when it wilts – it does so beautifully and within minutes. It does turn this shade of rather unattractive brown-green, but it is as delicious as it is ugly. Serve it with some poached salmon and you’ve meal that’s fit for a king. I only see sorrel in these spring and summer months though – so make haste! 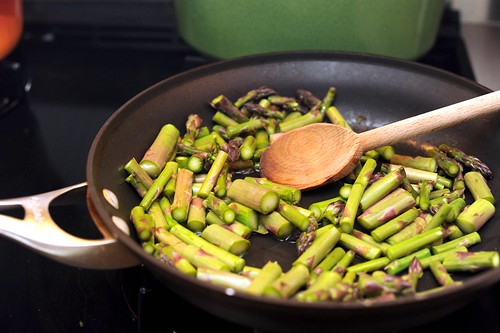 I had no intention, when I was gathering my ingredients at the market, to make panzanella, but when I got home, splayed everything on my counter and took inventory, the idea sort of just jumped at me. I’ve eaten many a summer panzanella, with thick slices of ripe tomatoes, chunks of onion and slivers of basil strewn alongside toasted, softish bread dampened by the juices and the olive oil. And I always felt like this is the kind of salad I could eat with abandon. I never felt like it was enough. But it’s not quite summer yet, and the vegetables I did have on hand looked like the belonged together in a spring version. And so, since my sourdough bread, delicious though it may be, had lived through better days and needed some reincarnation, I decided that a spring panzanella was the right way to go. 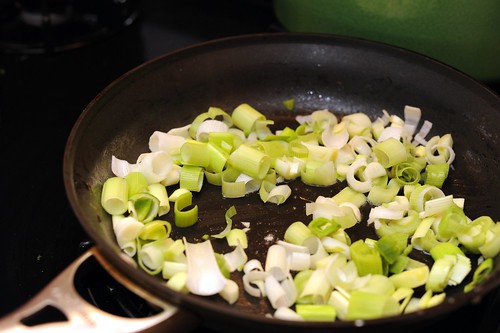 It comes together fairly quickly, but does take a little bit of time as you cook the ingredients separately. I prefer my panzanella at room temperature with warm sorrel to bind everything together. Don’t cook the peas – they are so sweet and lovely this time of year, you want to preserve that goodness as much as possible. Texture and temperature are important here, I think. I went largely with my instinct and was proven right. A few hours later later, and an empty salad bowl as well, my only regret was that I should have made more. And perhaps that I should get a bigger salad bowl.

Mix together garlic, oil, Parmesan and salt and pepper and drizzle over bread (that’s been put in a large bowl). Mix well being sure to coat the bread. Transfer to a baking sheet and bake, stirring a couple of times and rotating the sheet mid-way through, until the croutons are lightly colored on the outside, but are still somewhat soft inside, about 10 minutes. Set aside to cool. [Should you make your croutons crispy, don’t despair, all is not lost. When you mix all your ingredients together, let the panzanella sit for 10 minutes or so, allowing the edges of croutons to get a bit soggy absorbing the juices/oils of the salad – and it’ll soften them up!]

In a smaller bowl, mix together the shallot and the vinegar. Let sit for a few minutes. Stir in lemon juice, olive oil and mustard. Set aside. (Can be made ahead.)

Remove the dark green tops of keeps and trim root ends. Half, or quarter the leeks and wash out whatever sand/dirt might have accumulated inside. Saute leeks on slow heat in butter (2 tbsp) for 20 minutes until wilted, translucent and delicate. Set aside.

In the same skillet, heat a glug of olive oil and saute the asparagus for 5-8 minutes until they turn bright green and get warm, but are still crisp and crunchy. Set aside.

In the same skillet, over a small glug of olive oil, cook arugula or sorrel until it has wilted – 3 minutes or so.

Combine with the croutons, peas, asparagus and leeks. Pour enough vinaigrette to coat, add in the parsley, and toss well. Season with salt and pepper and if necessary grate a bit of Parmesan on top. Let sit a few minutes before serving so that the bread gets a bit soggy and absorbs the vinaigrette.