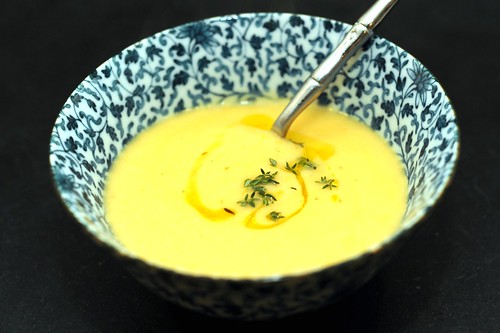 Maybe I got a little ahead of myself. I had intended for us to be fully unpacked and settled in five days. I thought, if we apply ourselves, we can get it all done in no time, like magic. But settling into a place doesn’t work that way. For one, you discover you need things. Things like shelves and shelf dividers and wall-mounting hooks. Things that help you organize, and if anyone from the Container Store executive team is reading this, we could really use one of your stores in our hood. Of course, the downside to that would mean that I would never, and I mean never, leave it – and Andrew have to explain to people that his girlfriend got lost somewhere between the Elfa shelving units and the kitchen stackables. It would be a sad tale of love and loss. I’d quickly become a cautionary tale, or an urban legend – or both!

Secondly, in the process of unpacking, you discover that there are things you no longer need, things you want to give away, things you want to sell. And so these things, until you find a proper place for them, sit in the middle of you living room/bedroom/hallway shamelessly staring at you as if to say, “You, you who no longer wants me, how could you do this to me? How could you just discard me?” Such is the state of things at the apartment. 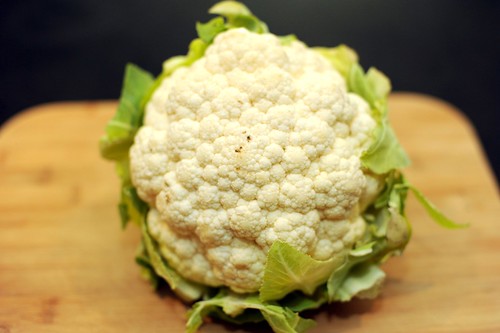 Oh, and here’s a third, most unexpected development – shockingly, I am loathe to unpack anything once I get home work work, make supper, and then eat said supper. After all this post-work activity, my mind wanders to the couch, to a book, to the television, or the internet. It’s not pretty and with a belly full of food and in my semi-sleepy state, I’m not the most productive human out there.

For the first few days after the move, we relied, quite heavily, on take-out. It was glorious and we felt fortunate to be in a neighborhood with such fantastic and affordable eating options. There was sushi, tomato soup with grilled cheese sandwiches, bahn mi, and bhindi masala. There was a Grimaldi’s pizza, lovingly furnished by our friends and neighbors who wanted to welcome Andrew to Brooklyn. And while we were eating all this food prepared by other people (thank you, thank you, thank you!) a nagging thought was percolating in the back of my head. A thought I couldn’t shake off. There were, as we were biting into lunches and dinners, groceries in our own refrigerator going bad. I didn’t have access to my kitchen and counters, but it’s not like I could have opened up my fridge and said, “Hey guys, mind hanging on for a few more days? Can you, um, stop your untimely rotting?” Vegetables, if you didn’t know already, don’t have ears – they can’t hear your pleading. 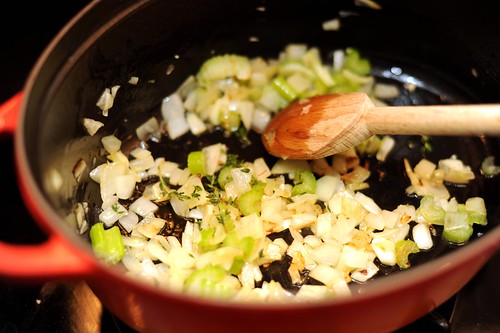 In the course of my writing there, and cooking, and learning, and writing some more, and cooking some more, and learning some more – I’ve been growing more clear about the purpose of this place. I was after story-telling; I wanted to get folks into their kitchens to cook without anxieties or fears; I wanted them to taste more, try more, not be afraid to fail, make new friends, create new memories, form their own stories. But there’s something evading me, something that I haven’t been able to articulate until a few days ago.

As I was digging around in my fridge, looking at my nearly-wilted carrots and setting them aside for my vegetable “stock bag”, I happened upon a head of cauliflower. It was still holding its own, but had a couple of smallish brown spots. It wasn’t rotting, but it needed to be given a new purpose, a new life. It was going to become soup. And with it, I realized that in the process of cooking here, I’ve become a much more resourceful cook. I delight in not throwing out ingredients, in finding different ways to use them, in stretching them further and further. A roast chicken leaves behind a carcass that can be used to make flavorful stock. Sauteed leeks can make an excellent nest for a baked egg. 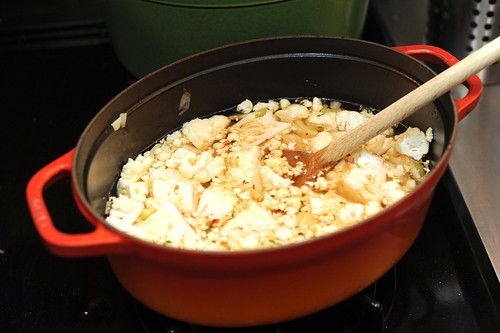 I started out with sweating some onions and garlic in olive oil. After a few minutes, when they became translucent and soft, I added some celery and a couple of sprigs of thyme. I gave the aromatics a few minutes to steep before adding the cauliflower. And then, as I was digging around for a snack (I was growing peckish), I happened upon some Parmesan rinds and a jar of harissa. I dropped a whole rind in the pot and added a tiny dollop of harissa for some heat and dimension. And then I covered the pot and let the cauliflower grow soft and mellow in the simmering water until it was subdued into softness. After a whir of my immersion blender and some lemon juice to perk up the flavors, the soup was done right in time for a hearty lunch.

With a hunk of a rustic country bread, this soup was precisely what we needed on that cold, blustery day. And I was immensely pleased with myself for coming up with a recipe that proved not only delicious, but also resourceful. Nothing went to waste, not even the little tops of the celery (which became part of my “stock” bag in the freezer). When I was little, I marveled at how my grandmother was able to repurpose everything; then, as a teenager I rolled my eyes at such frugality. And now as an adult keeping my own pantry, I marvel at it again. No doubt, when my kids witness this trait in me, they too will at some point roll their eyes. But hopefully, like me, they will come around and find that wasting as little as possible in the kitchen can be most satisfying and rewarding way to cook.

Cauliflower Soup with Parmesan and Harissa

In a heavy-bottomed medium-sized pot, warm up a few glugs of olive oil over medium heat. Add the onion and cook for 5 minutes until translucent and soft. Add garlic and cook 1 minute longer. Add the celery and thyme, mixing well to combine, and cook for 2 minutes, allowing the aromatics to release some flavor. Add the salt and pepper and stir.

Place the cauliflower into the pot and add just enough water to cover the cauliflower (for me it was about 3 ½ cups of water, but for you it might be somewhat more or less). Bring the vegetables to a simmer and then add the cheese rind and harissa, mixing well. Turn the heat to low, cover, and cook for 30 minutes, until the cauliflower gets soft and mushy.

Remove from heat and, using an immersion blender, puree the soup until silky smooth (mine took 3 minutes to get to the desired consistency). Add the lemon juice and stir to mix. Taste to see if you’ve added enough lemon juice and add more, if needed. Ladle into bowls and serve with a sprinkling of thyme leaves and a drizzle of your best olive oil.