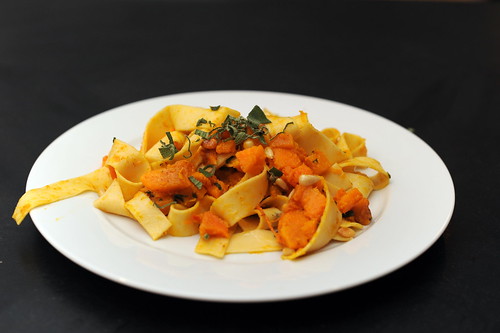 And so there was the move. It was quick and seamless (is it possible to sing praises to your movers, because I want to!) and the whole thing took less that three hours from the moment the movers got to Andrew’s place to the moment when he handed them the check and tip and we shut the door. It’s official – we can finally can call one central space home, instead of referring to our respective apartments as our “weekend place” and our “city place”. It sounds very bourgeois and fancy, but it was a major pain in the neck constantly to be living our of a bag, unsure if a particular item was here or there. Never mind the cost of New York real estate – boggles the mind.

We unpacked a bunch of boxes on the first day, and around five o’clock were so exhausted we could barely move. We ordered Thai take-out and watched taped episodes of the Daily Show. It felt like heaven, somehow, amidst the clutter and the disarray – it felt so good to be under one roof. And so for the last few days we’ve been trying to settle in – and so far, it’s been really easy and smooth. We rearranged some furniture and it was a lot easier than I thought it would be. It’ll take some time, but we’re on our way. I can finally start cooking in earnest again (hard to do with lots of travel, packing, guests, etc.) and I can’t wait. So this here little dish is from a few weeks back, when I knew I was going to be too busy to cook and develop new recipes, I tucked it away for a day like today. It was inspired by one of our neighborhood restaurants – and the dish I had there has lingered on my mind for quite some time. 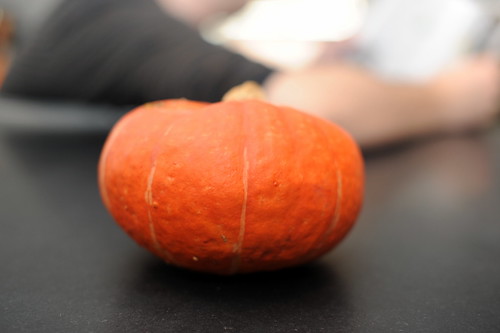 A few years ago, over at dinner at Chestnut in Carroll Gardens, I had an appetizer of kabocha squash ravioli in brown butter with sage, toasted pine nuts, and tiny cubes of fried dry ricotta. The dish was a revelation and I’ve been on a mission to recreate it at home ever since. But someway or another, it has always evaded me and I would remember about the recipe only in the springtime as I’m lugging home garlic scapes and ramps with kabocha squash season far far behind me.

But a few weeks back when I was at the market, I spied a pretty orange kabocha squash at one of my favorite farm stands. And I remembered the ravioli, which looked more like little purses than traditional ravioli. Ten minutes later I was at home, putting the groceries away, but this squash I proudly displayed it on our dining table, like a centerpiece. It didn’t stay there long.

The next day, as I was taking stock of our groceries, staples and such and trying to plan a simple, but somewhat festive dinner for the night, I remembered the centerpiece on the table. I thought of the ravioli, but realized the day was far too busy to make proper ravioli from scratch. But, I thought, there’s pasta and I could build a dish around that. An aha moment set in and I was off to the races kitchen.

I decided to roast the squash with a little olive oil and then to cut it up into smallish pieces for the pasta. Kabocha, really, is a pumpkin, known for its sweetness. It’s the kind of thing you eat and marvel that no sugar was added to it – the naturally occuring sugars are plentiful and have hints of maple and caramel, almost. It makes for a wonderful soup, but that’s a story for another day. 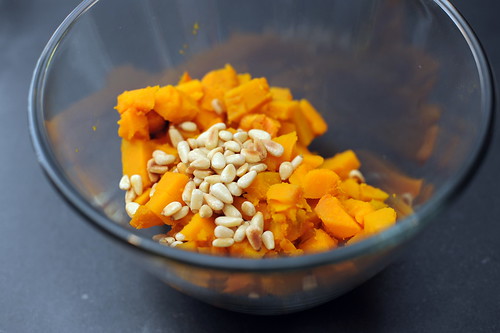 I toasted the pine nuts, set them aside, chopped the sage (in retrospect a chiffonade would have been a prettier choice), and made the brown butter. Then, I plopped the pasta into boiling water and while it was cooking, I gently added the squash and the nuts into the brown butter, warmed everything on low for a couple of minutes, and by the time the pasta was ready and drained, threw everything together in the original pot were the pasta cooked. I added half the sage while I tossed the pasta – letting it infuse the butter with its woodsy scent. And then, after I scooped the pasta into our bowls, the rest of the sage went on top as pretty garnish.

Ravioli it was not, but it was a close second and I spent little hands-on time in the kitchen. Don’t get me wrong, if it were me, I’d choose to be there most of the time, but sometimes life gets in the way: commitments, work, unexpected shopping trips for jeans (when yours rip on you in the most unceremonious of ways). We ate our dinner with a side of simple green salad and glasses of dry Riesling. A simple, satisfying meal that, because of brown butter perhaps, had luxurious aspirations. And perhaps because it’s been such a cold winter here in the Northeast, brown butter seems particularly well-suited for a comforting meal. And while we’re all on our best behavior this month, a little bit of indulgence might make the month seem less austere. Plus with a green salad at your side, you might feel downright righteous.

Hey, it’s the Playoffs – where’s the game grub?
Sure, I know pasta with brown butter pasta might not be on your list of items to make today, so perhaps some spicy wings, quesadillas, or chili are in order!

Pasta with Brown Butter, Kabocha and Sage
If you can’t find kabocha in your grocery store or farmer’s market, butternut squash will work well here as well.

Place the squash on a baking sheet, and brush the squash quarters with a little bit of olive oil. Bake for 45 minutes, or until easily pierced with a knife. Remove from the oven and let cool. When squash is cool enough to touch, cut it into ½ – to ¾-inch cubes (without the skin). Set aside. Fill a large pot with water, add some salt to it – this is what water for pasta.

Meanwhile, in a small pan, over medium heat, toast the pine nuts 5 to 7 minutes, until golden brown, taking care not to burn them. Set aside.

In a small saucepan, over medium heat, melt the butter and cook over low heat – about 10 minutes – until it gets darker in color and the solid start to turn golden brown to milk chocolate brown. Remove from heat. Don’t burn the butter, or if you do, start over with this step.

By now the water should be boiling. Toss the pasta in the water and cook according to the packaging instructions. Drain, and toss with the brown butter, kabocha, pinenuts and 1 ½ tablespoons sage. Sprinkle with a little salt and pepper and toss to combine. Serve immediately, garnishing with the remaining sage.