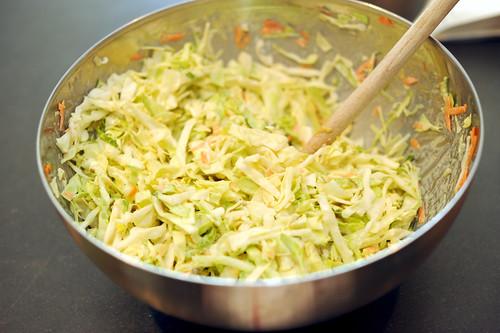 It’s not exactly an intuitive thing to think of slaw this time of year. And it would have totally slipped my mind were it not for last week’s Super Bowl party that my friends threw to mark the game. The big piece de resistance for the meal portion were pulled pork sandwiches and my girlfriend, Sharon, made sure to slow-roast the meat over twelve hours. My contribution, paltry this time around, was a simple slaw to complement the sweet tones of the pulled pork. 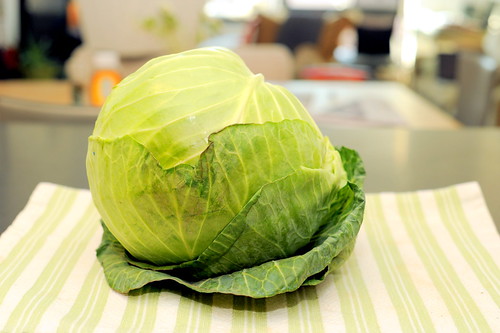 My initial thoughts turned to salads I typically gravitate to in the winter. Plates of bright citrus, bowls of hearty lacinato kale, mounds of sturdy escarole. But none of those went as well with pulled pork as a traditional slaw. And when I went on a grocery run, I noticed that while the greens were looking rather limp and sadder than usual, cabbage was sturdy and crisp, as if trying to tell me that I should, perhaps, give slaw a chance. 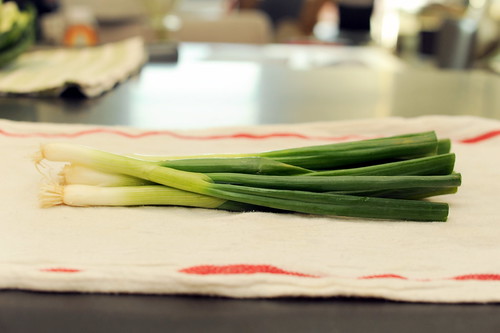 I’ve made many slaws by now, and rarely will I pass on a homemade one. I love slaws, but ofte see people shun it at picnics or parties. Sadly, cole slaw gets an unfairly bad rap no doubt because the stuff that’s normally sold in the grocery store has been sitting out for god-only-knows-how-long and is drowning in a ton of mayo. When I see it behind a deli counter, my stomach churns a little. But a homemade cole slaw is a whole different animal, if you will. I love that it’s the kind of thing you make and let sit for some hours to let the flavors meld and the cabbage to get slightly limp, but still remain its cheery crunch. I love the bright notes of citrus of vinegar that lift the mayonnaise-based dressing into something more exciting. And looking back on last weekend, I have to say that eating a plate of something crunchy and fresh has been a welcome reprieve from all the braises and stews and soups we’ve been having as of late. 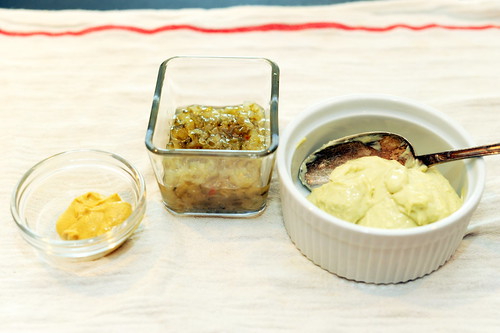 Because our pulled pork was going to be served with some barbecue sauce, I wanted to dress my slaw with something that would contrast nicely with the sweet flavors, something that would have a kick. In the past, I have often snuck in a teaspoon of wasabi into my mayonnaise slurry, but rummaging around my pantry last weekend, I realized, I had run out of quite a bit of stuff, wasabi included. Disappointed, I went to find mayonnaise in the fridge, only to happen upon the next best thing – wasabi-spiked mayonnaise from Trader Joe’s. While it wasn’t my original concoction, I thought that in light of the circumstance it was going to be have to do. When life gives you wasabi mayonnaise… 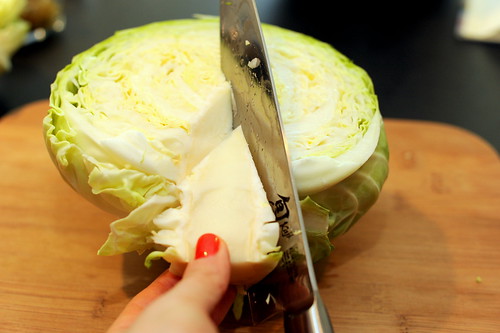 Not only did it work beautifully, but everyone, even non-slaw lovers, piled their plates up high with the pork and slaw, mixing them together and going back for seconds. When they found out the slaw was homemade, their faces brightened a little. It makes me feel hopeful — perhaps I have made a few slaw converts that evening — one crunch forkful of cabbage at a time. 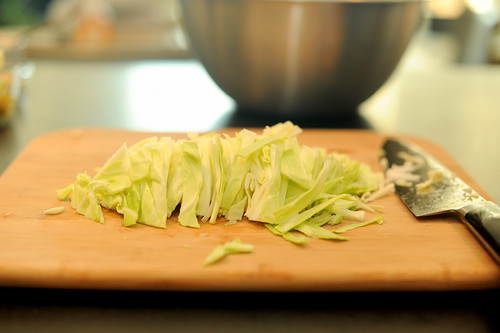 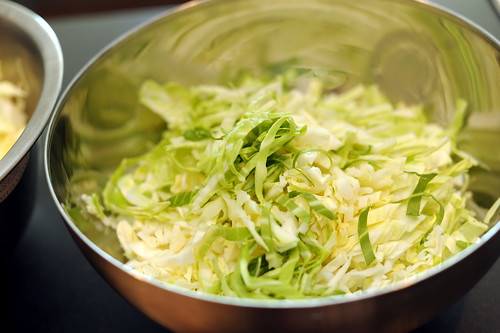 I refer below to green cabbage because that’s what I grew up with and it’s what I prefer to eat. If Napa cabbage is your favorite, or you want to do a mix of green and red cabbages – by all means, play around and see what tastes and textures suit you best. Likewise, the addition of wasabi powder is purely optional as not everyone likes to have their slaw with a kick.

1. Wash and dry your cabbage and remove the outermost leaves. Cut the cabbage in half with a sturdy, sharp knife. Remove the dense core by cutting the wedge on both sides. Quarter each of the halves and slice each quarter into thin ribbons about 1/8-inch thick.

3. Place your shredded cabbage, carrot and scallions in a large bowl (or two large bowls, as was the case with me), pour the dressing over it, and toss to coat evenly throughout. Season with salt and pepper, toss again, taste, season again if necessary, and toss again if seasoning for the second time.

4. Cover the slaw and chill (or refrigerate) until ready to serve. Ideally, if you’re serving the slaw in the afternoon, you’ve made the slaw in the morning, so that the flavors will sit together and meld. Toss once more before serving.