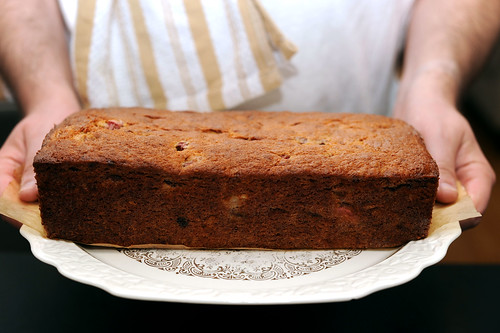 To think that this strawberry-banana bread was a result of an injury – might seem a bit far-fetched, but it is absolutely true. An injury that occurred almost one year ago, from which I’m still sporting a bone bruise, and what is probably permanent ankle swelling from the trauma. This clearly is price I pay for an idea that’s going into my regular rotation. I’ll take asymmetric ankles any day, even if that means favoring pants in lieu of dresses to hide the unsightly thing.

How did I get myself into this pickle? This was a classic case of wrong place, wrong time. A woman slammed a door on my foot while I was trying to get a strawberry-banana smoothie. There, now you know the origin. As for those other questions you might have, like “Why would she slam a door on your foot?” or “How hard must one slam a door to inflict what seems to be permanent damages?” – I’ll answer briefly. The woman didn’t do it intentionally, which doesn’t make her actions any less wrong – she was simply not paying attention to me and was yelling at her toddler twins who were strapped into one of those twin strollers. In a fit of exasperation, she slammed the door – and my foot just happened to be there (ouch!). As for the second question – well, she was angry. I yelped in pain, she apologized profusely, but I could barely pay attention to her – my foot immediately turned myriad different colors; there was even a trickle of blood. 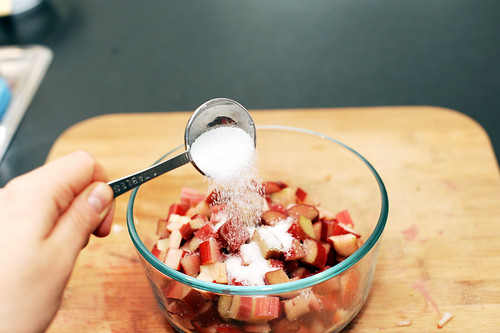 A smart, normal person would have taken themselves to the emergency room. I, stupidly, decided that it was just a bad bruise that would heal itself in a few weeks. Hoo-boy, was I wrong! 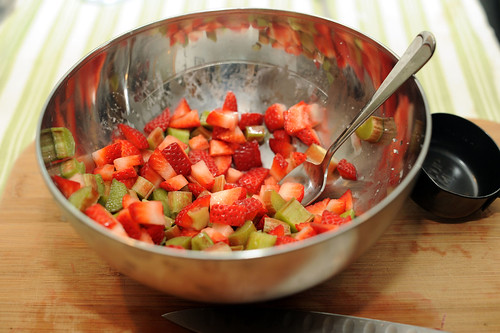 For the next few weeks I could barely walk, my foot was bandaged up, there was a lot of swelling. But I was not in despair – I had a recipe idea – and that made it all better (crazy, right?) What if I took a strawberry-banana smoothie and made it into a strawberry banana bread? Better yet, if rhubarb happens to be in season, why not throw that in as well? If strawberries and bananas go together, and if strawberries and rhubarb go together, then won’t strawberries go well with bananas and rhubarb? 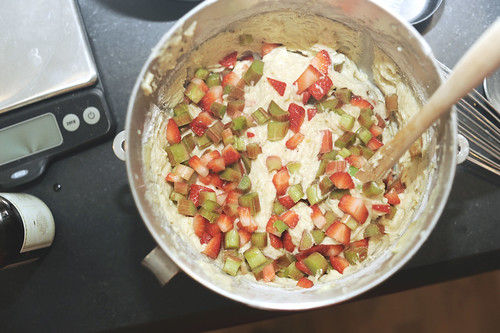 There were a few failed batches, namely working out the proper batter to “stuff” proportions. One time, I stupidly baked the bread in a loaf pan too small and the contents spilled out onto the bottom of the oven causing the entire apartment to fill up with smoke. [Thank you, smoke detector, for calmly informing me there was a fire. There wasn’t.] But a few batches later, I finally got it right. 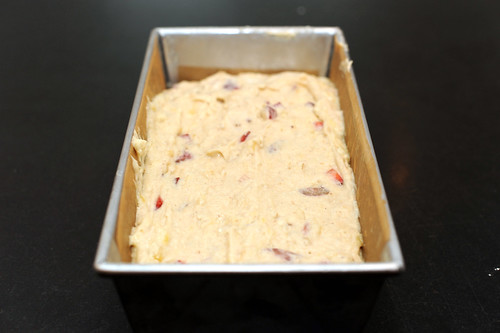 One look at the cross-section of the bread told me something special was going on. Banana bread, normally, is this mousy brown color – nothing terribly exciting to write home about. But studded with bits of strawberries and rhubarb – it’s a beauty. But what really brought it all together were a few spoons of rum that I added on a whim. With is sweet, sugary, floral scent, the rum amplified what strawberries and rhubarb, not to mention bananas, already brought to the table. 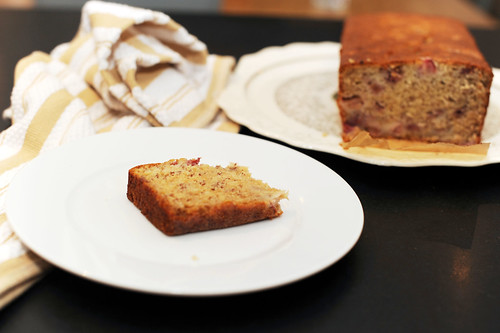 A year later, the bone bruise is still there, the swelling – notable, particularly after I fly. But at least there’s a silver lining. There’s strawberry-rhubarb-banana bread to console me while I ice my ankle.

In my world – that’s a small price to pay.

Position the oven rack in the middle and preheat the oven to 350 degrees F. Generously butter a 9×5-inch loaf pan and line it with parchment paper.

In a medium bowl, stir together the rhubarb and strawberries with 1/2 cup of sugar. Set aside while you prepare the bread batter.

In a large bowl, whisk together the flour, baking powder, baking soda, nutmeg, and salt, until fluffy and well-combined.

Using a stand mixer fitted with a paddle attachment beat the butter and the remaining 1 cup of sugar together with an electric mixer on high speed until light and creamy, about 8 minutes. With the mixer on medium speed, beat in the eggs on at a time, using a rubber spatula to scrape the bottom and sides of the bowl between additions. Add bananas, sour cream, vanilla and bourbon, scraping the sides and bottom of the bowl between additions.

Add the flour mixture to the butter-sugar mixture in two parts, and, with the mixer on low speed, stir just until just combined. Gently fold in the macerated fruit until evenly distributed.

Allow the bread to cool on a baking rack for 15 minutes before running a knife around the perimeter of the bread to disengage it from the loaf pan. For best results, allow to cool overnight (or for the rest of the day) upside down, uncovered. The bottom might get soggy otherwise, and this way you preserve your banana bread’s nice crust.

For best results, store loosely draped with a kitchen towel. Wrapping your banana bread in plastic or foil will result in gummy texture.