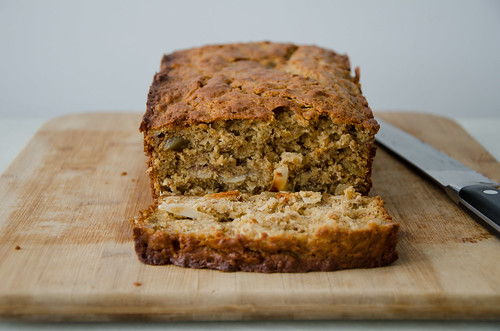 Does the world need another recipe for banana bread? I highly doubt it, and yet here I am today, writing about it, right after talking about not wanting to throw the same thing (in slightly different giftwrap) your way. And yet, mere days later, I went ahead and did just the opposite – and I blame Jamaica, where my head is these days, for all this.

Why Jamaica of all places? Because that’s where we’re (finally) going on our honeymoon in about two weeks. Ten months into being married, we’re sneaking it in before our one-year anniversary. I am told that, technically, it’s no longer a honeymoon, but we’re calling it that, and go ahead to try and argue with us.

Wait a second, you’re probably thinking, “Didn’t you just get back from Florida? And now you’re going away, again??”

I know how this looks on paper: that all we do is fly to Florida and the Carribean, but normally, we’re so not the jet-setting type. But the way travel schedule worked out this year (especially when it came to visiting Andrew’s grandmother in Florida), it does seem like all we do is vacation in warm, sunny places replete with palm trees and swim-suit appropriate venues. I promise you this: we don’t.

Banana bread is pretty much how we deal with bananas, which we buy every week, which go past their prime. Unwilling to throw them out, they find their way into our smoothies and get baked into bread. Sometimes, I purposefully set aside a few bananas and watch them grow beautifully speckled with a soft spot here and there.

Normally, the banana bread here stays pretty predictable. I like a pop of tart in my banana bread, so I add frozen cranberries which I stockpile around Thanksgiving. I don’t like nuts or chocolate in my banana bread. (I think I just heard an audible gasp from a few of you.) I like a little bourbon in there, and I like to add a generous helping of nutmeg. Those are my banana bread tenets and I tend to stick to my well-established routine, although last year, I was clearly suffering from spring fever, because I made one with strawberries and rhubarb, and I wasn’t even a tiny bit sorry. 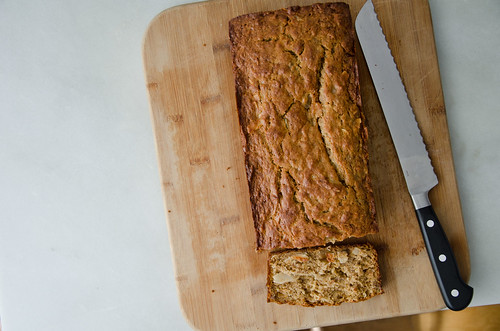 And yet this last banana bread endeavor proved to be so different and so fantastic, that I just had to share it here with you. Inspired by all flavors Jamaican, I decided to go spice-heavy and added ground ginger and allspice. I swapped out regular sugar for palm sugar, and yes, I know palm sugar isn’t particularly Jamaican, but I was thinking palm trees, palm sugar – it sort of works, right? Out went the bourbon and in went the rum. And at the last minute, I threw in a handful of each: unsweetened coconut chips and finely chopped crystallized ginger.

I tasted it after it cooled and it was very, very good. For a second, I thought I heard the ocean and felt a gentle island breeze, but no, I was still standing in my kitchen, chewing on a piece of banana bread. Then I wrapped the loaf in a kitchen towel and set it aside, so we could bring it to an Easter brunch with friends. And that’s when things got interesting. Two days later, the bread transformed from being just excellent banana bread to something that became far more than the sum of its parts. I called it my banana bread nirvana.

I don’t know what it is, but letting your banana bread age, changes it for the better. The crust stiffens slightly, while the crumb remains tender; but more than that: the spices grow deeper, more amplified, which results in quite possibly the most satisfying banana bread I’ve eaten in ages. Imagine if spice cake married banana bread and had a baby – and you get this loaf.

So try this at home: After you bake your bread, let it cool completely. Taste a piece, then wrap it in a kitchen towel and let it sit on your counter for at least one day. Two if you can manage to wait that long. Then cut yourself a piece and eat it with a nice cup of tea or coffee, depending on your preference. Or put a pat of good salted butter on it. It might not transport you to Jamaica, but if you put on some Bob Marley while you eat the bread, it will most definitely help.

Don’t be afraid to play around with spices here. Scale them up or down depending on how richly spiced you want your bread to be. I purposefully kept the last two measurements as “handfuls”, and yes, certainly, we all have different sized hands. But I think it’s a little more fun, at times, to approach baking with a wee bit of irreverence. Don’t go over 1/2 cups measures for either the coconut or ginger and you should be all set. While unsweetened coconut flakes (sometimes called chips) are a bit harder to find, they’re worth seeking out. Not only will they keep your banana bread from getting cloyingly sweet (as I find with sweetened shredded coconut), but also it’ll be that much healthier without the added sugar.

Position the rack in the middle of the oven and heat to 375 degrees F. Butter a (9×5-inch) loaf pan.

In a large bowl, whisk together the flour, baking powder, baking soda, allspice, ginger, nutmeg, and salt until combined.

In a stand mixer, beat the butter and sugar together on high speed until light and creamy, 4 to 5 minutes. Set the mixer speed to medium and add in the eggs, one at a time, bananas, sour cream, vanilla and rum, stopping the mixer and scraping the sides and bottom of the bowl before each addition.

Add the flour mixture to the butter-sugar mixture and mix on low, just until the flour is moist and no longer visible. Do not overmix. Gently stir in the coconut flakes and ginger to incorporate.

Scoop the batter out into the baking pan and smooth out the top. Bake around 40 minutes or until a toothpick inserted into the center of the bread comes out clean. Let the bread cool completely. Wrap it in a kitchen towel and let it age at least one day before eating. If you break down and have a piece before hand, I won’t judge you, I promise.