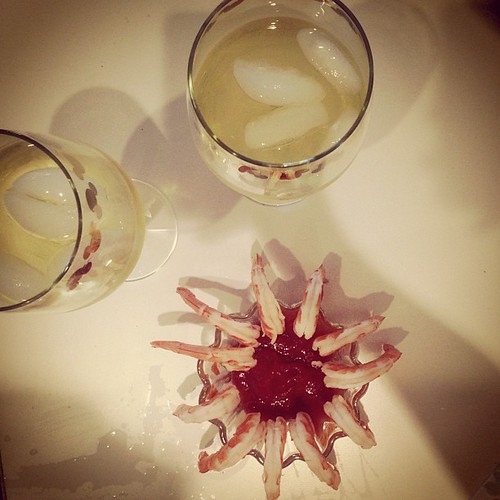 Hi, folks, I believe I owe you some recipes. It’s been awhile and I’m sorry. I’ve had my hands full lately and we took a quick trip to Florida to visit Andrew’s grandmother so there’s been little in the way of experimenting. The weather, too, has been uncoorperative as of late. Officially, it’s spring, but if you didn’t have a calendar, you would’ve thought we were right smack in the middle of winter.

I, too, have been uncooperative with my kitchen. For one, I’ve been poring over new cookbooks and looking for inspiration. Sometimes I need to do just that: step away from looking to put new material out and just cook our old favorites with abandon. And so I’ve been cooking old favorites over and over. Trying a few things too, but not loving them either (I’ve learned, for example that I don’t much like black cod or halibut); so why write about something I found just so so.

Cooking the same things over and over is actually quite revelatory: I always walk away with having learned something new. One of my favorite quotes about cooking is from Judy Rogers’ much beloved Zuni Cafe Cookbook. There, she writes about how cooking the same thing over and over is just the thing to really learn a dish. Repetition begets education.

There’s this very out of season salad that I’ve been making several nights a week (to accompany our dinner), and it’s been fun swapping this for that and just using what’s in the fridge. I figure this is my in-between time, before I get back to the kitchen inspired again. I don’t feel like sharing the new spring frittata, because well, if you’ve made the frittata from this site, you don’t need me to tell you what you can swap out unless I show you a new revolutionary way to do it. I’ll leave it to you to make up your mind on what, if anything, you want in it. I don’t want to put up a “new” recipe when it’s just a blatant variation on a theme. I know, I’m getting into the weeds here and it can get pretty circular with reasoning here. I just want to give my brain a slight break from the constant need to come up with new things. Sometimes I just want to go back to the kitchen and just make some simple pasta.

And it’s not that I’m uninspired per se, but that I’m taking the time to be alone with my thoughts in the kitchen. Not in the context of this site, but in the context of my relationship with the process of cooking. You know, how we felt about our kitchens before blogs came around?

I won’t bore you more. I promise some more recipes soon. Or maybe recipes interspersed with some writing – as I’ve been feeling a bit more that way too. But, here are this week’s links; I hope you like them, and I hope you all have wonderful weekend plans (even if it’s just reading on your couch, which is wonderful too) ahead.

A very funny obit in the Telegraph. I had to look up what “cat burglar” meant. Also, the verb “burgle” (as in, “he had burgled”) is fantastic.

Peter Scott, who has died aged 82, was a highly accomplished cat burglar, and as Britain’s most prolific plunderer of the great and good took particular pains to select his victims from the ranks of aristocrats, film stars and even royalty.

Your phone vs your heart. A good thing to remember and practice.

The decline of the Today Show and Matt Lauer.

Noel Coward to Marlene Dietrich: “DO NOT be so bloody vulnerable.” Sage, sage advice.

A propos SCOTUS, Justice Ruth Bader Ginsburg is my favorite. If she’s looking for a grandkid to adopt, I’d like to volunteer myself. All I require is a monthly tea date – I’ll provide the tea and the accoutrements.

This moving, tear-jerking piece about a wounded soldier making a decision to stop his suffering. Having just re-read Rachel Maddow’s excellent book, Drift, this reinforces the point: war should not just be a last resort, but it should not be so easy for us to either go to war or create loopholes (privatization, anyone?) that allow or executive branch to bypass the proper channel checks.

Yotam Ottolenghi interviews the authors of “The Gaza Kitchen”, and what follows is a curious discussion of history and nostalgia, of keeping tradition through food. Lovely interview that also struck me as hopeful that the region will, someday, become a harmonious one.

Wisconsin man indicted for 2011 anonymous hack in Koch Industries. I know what he did was wrong, but holy cow, that was gutsy.

Favorite new (to me) blog. I can’t stop looking at it.