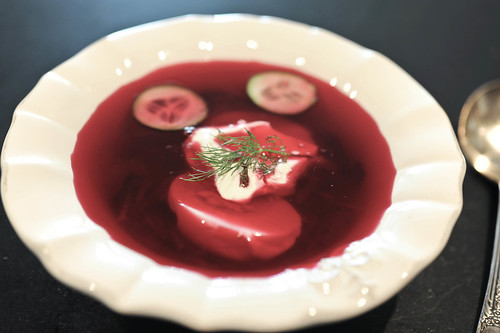 This here, to me, is the epitome of a Russian summer. A cold borscht on a hot summer night. Pull up a chair, stir some sour cream into it, and taste how refreshing beets can be. The tang of sour cream, the crunch of the cucumber, the grassiness of dill – that’s the stuff you remember years later and it makes your mouth water just thinking about it, and your stomach growls audibly. You grow both giddy and slightly melancholy just thinking about it.

I had a good childhood in Russia – a wholesome, leave-it-to-Beaver-whole-milk childhood. It stands at a stark contrast to what people might imagine a Soviet childhood to be – and mine was a good as they get full of books, walks in the forests, fishing in the rivers, and gazing at the stars. Summers were idyllic in particular – I spent them at my grandmother’s: a lot of time outside, hours foraging for berries and mushrooms, dipping my toes into cool lakes (I couldn’t swim back then), scratching itchy mosquito bites, and icing bruises and scrapes – the childhood that was simple and minimalist, yet lacked nothing. Bill Cosby had this stand-up bit back in the day, when he would talk about his childhood and how his parents would give him a stick and would tell him to go play in the back yard. And there he would be, sitting in an empty backyard, dirt all around him, digging a hole in the ground with his stick, happy as happy can be. That was me, happy to be outside and dig a hole with a stick. Happy to find wild strawberries and bring them home in a basket to have them for dessert sprinkled with sugar and dotted with golden-hewed cream so thick you could stand a spoon in it. 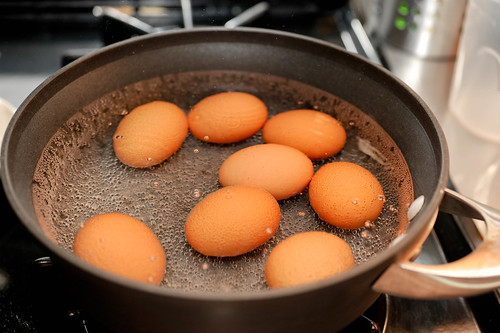 We’d be allowed home for a lunch, which usually involved a soup of sorts, usually, something chilled to cool us off from the blazing sun. Oftentimes there was sorrel soup, or a cold dairy egg noodle soup, my cousin’s favorite, but most often we had cold borscht which almost felt like a salad of sorts submerged in a ruby red liquid, with a tiny ivory swirl of sour cream peeking through at the top. I usually ate two bowls at lunch, refusing “vtoroye”, the second course. To me – cold borscht was king. To my grandmother, it meant waging a battle with me over eating everything that she cooked. She usually won, but it would take me over two hours to eat my lunch – I didn’t yield easily and I had a lot of time on my hands. 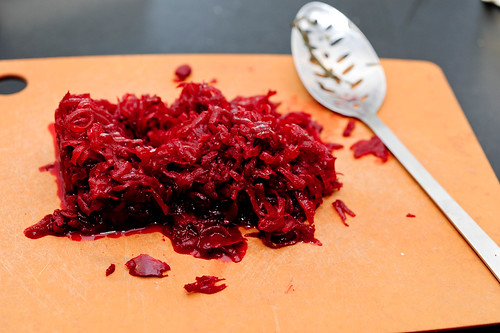 Recently, I thought of sharing my summer soup memories with my boys at home. I call them “my boys” now because it’s become a little unit of sorts, the three of us. We somehow make do in our small apartment, even though we’re always running short on drinking glasses, and seem to be constantly doing laundry.

I made enough soup to feed an army (these boys can eat!) – I fully expected a hit on my hands. It didn’t even occur to me, not for the tiniest of seconds, that I might have to be the primary sole eater of this borscht. “What fool,” I thought, “would turn this down?” Clearly, the fool in the circumstance was me.

But I didn’t see it coming – my enthusiasm for this ruby-red soup wasn’t reflected at home. Neither Andrew nor Russell were overly enthusiastic about it, and after sampling a half a bowl, casually left “forgot” about the borscht, each making all kinds of excuses why they didn’t finish it. They did not ask for it again. And I managed to eat it seven times in about five days. 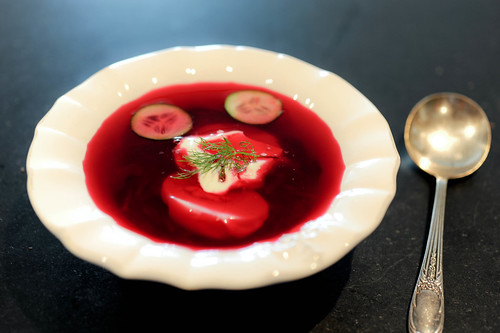 I pouted and attributed it to a cultural misunderstanding (what do they know about beets and their versatility), but, in the end, I still had to eat the cold borscht myself, two bowls at a time, the way I used to, with plenty of sour cream swirled in. Except there was no second course, and no need to make a two-hour affair out of it.

1. In a large stock-pot bring the beets and water to a boil; reduce heat and simmer, on low, covered, until the beets are fork-tender – about 25 minutes, or more depending on their size. Remove the pot from heat and, using a slotted spoon, remove the beets from water and plunge into an ice bath until they have cooled to room temperature. Slide the skins off the beets and grate them on a coarse side of the box grater.

2. Stir the shredded beets back into the liquid along with 2 cups of beet greens. Stir in the lemon juice, vinegar, sugar, and salt. Bring the soup to a simmer and allow to cook for 20 minutes, adjusting the seasonings if necessary. Remove the soup from heat, cool, and refrigerate until ready to serve, at least 3 hours.

3. In a large bowl, toss together the cucumbers, radishes, dill, and scallions. Spoon a small mound of the vegetable-herb mixture into each bowl, along with an egg, and ladle the soup on top. Serve with a dollop of sour cream, if you like.