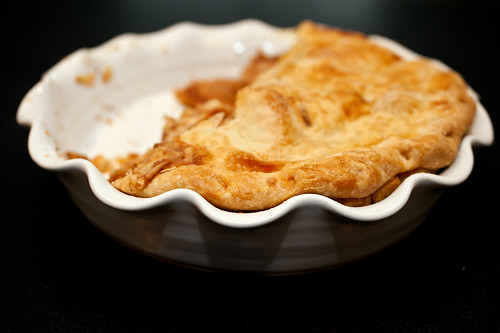 It’s December already; how did that happen? Once again, I find myself wondering where the previous month went. I suspect I’m not the only one.

A few things of note…

Bluefish is not photogenic no matter what state it’s in: raw, in-prep, or cooked. Believe me, I know this for a fact. For the last several weeks, Andrew and I have been having fish Sundays. We’ve named them thus, so perhaps “Fish Sundays” sounds more official? I’ve tried to photograph the creature and it’s not looking good. I suppose, I can console myself with a slice of pie. Now pie, especially filled with apples and dulce de leche – that always looks (and sounds) good. 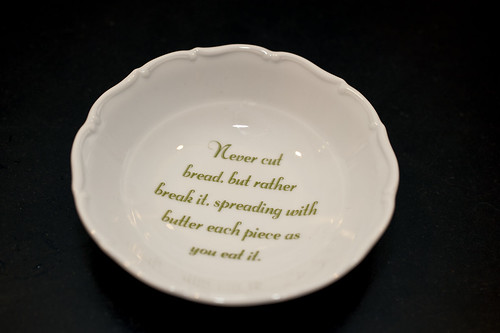 Also: Thanksgiving turkey takes longer to cook than suggested time. You know that 15 minutes per pound rule when your turkey is cooking? Yeah, it has never ever worked for me. Somehow, that turkey always takes longer than the “expected” time to hit 161 degrees. In my true fashion, the turkey I cooked for Thanksgiving, arrived to the table quite a bit later than expected. 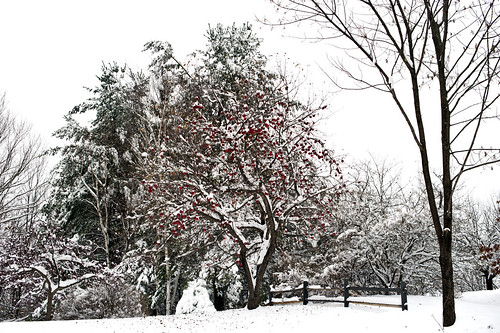 But I am here to talk to you about pie, not turkeys or bluefish. Where we were in Vermont for the holiday, lots of snow fell the night of Thanksgiving and most of our group went for a walk in the snow. When they came back they brought a few apples they pulled off a tree nearby somewhere. The verdict: Eating apples straight off a tree, after a foot of snow had fallen the night before, yields not such tasty results. The apples were mealy, which was disappointing because this year Andrew and I missed apple picking entirely. I’d blame wedding planning, but I think it was just us being generally disorganized. 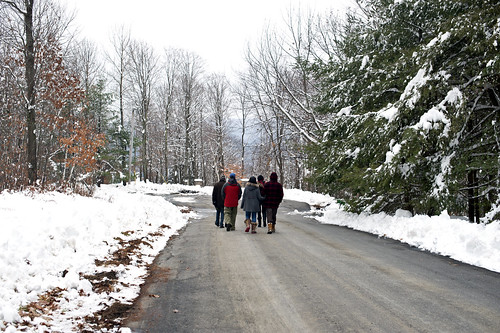 I miss Vermont. A few days there were simply just not enough. The house Andrew’s parents had rented was situated upon a hill, surrounded by trees, with a striking view of the mountains in the back. It was so dark and so quiet at night, and you could see every star in the sky. And covered in a foot of snow, the place just seemed magical, transported away from deadlines, deliverables, and adult responsibilities.

There was a lot of this. 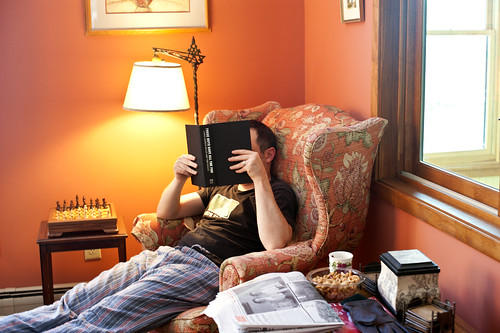 As well as a lot of this. 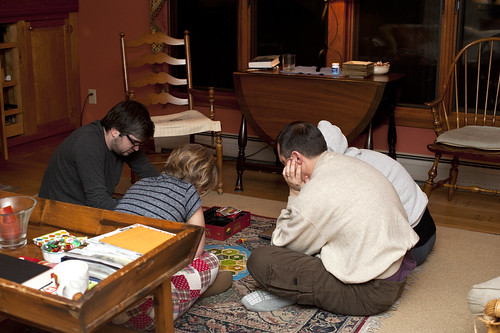 And quite a bit of this, too. 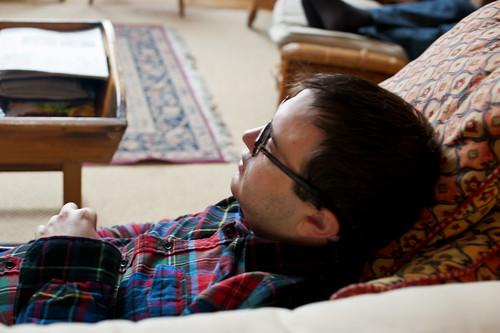 I took a picture of the turkey before it was cooked, but in driven by hunger and turkey’s tardiness to the feast, failed to take the after (I do this every year, by the way). I only remembered when I was staring at a turkey carcass, peeling off slivers of turkey meat from the back. 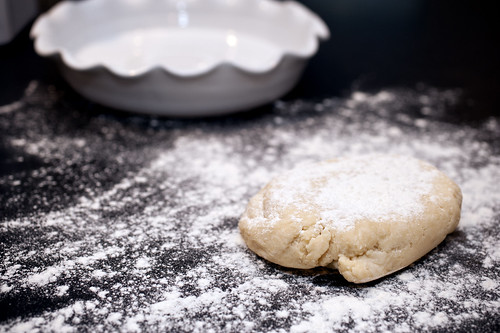 We didn’t have this apple pie for dessert (there was a delicious apple crumb pie that my brother-in-law’s girlfriend Abby made), but it would’ve played nicely with the apple crumb pie. Because, and this is just solely my opinion, you can never have too much pie, particularly of the apple persuasion. 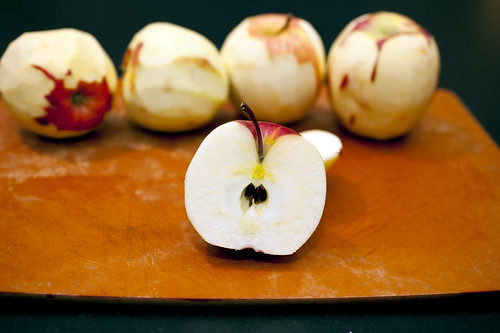 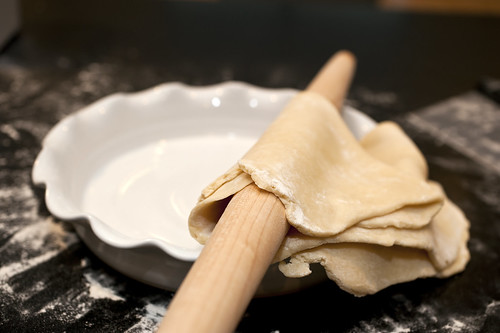 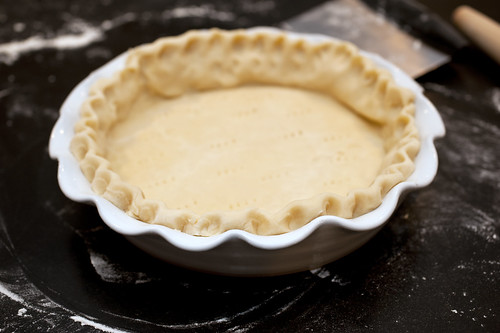 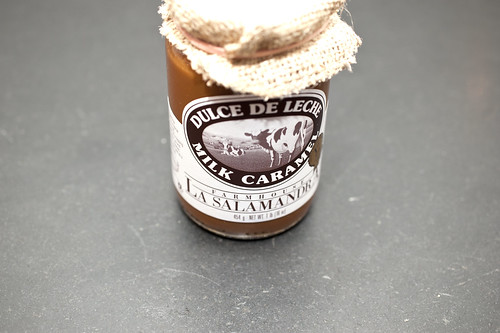 Which is not to say that Thanksgiving is the only time to make an apple pie. Any average day can be made substantially better with a slice of pie. Why not a Pie Tuesday? Since, clearly, there are now Fish Sundays in our household, Pie Tuesdays sound just about perfect.

There’s a debate on whether or not it’s useful to blind bake the bottom crust of pies. Sometimes, when I feel lazy, I skip it, but because between the juiciness of the apples and the liquid dulce de leche, I wanted to ensure that the bottom crust was not soggy and that the whole pie was light and flaky. Because of this, I strongly encourage that you do take the extra step and blind bake your bottom crust if making this pie here.

1. In a food processor fitted with a metal blade, pulse together the flour and salt just to combine. Add the butter and process just until the butter is the size of lima beans. Add the water one tablespoon at a time and pulse until mixture just comes together. Pat the dough into a ball, divide into 2 equal pieces, flatten the pieces into disks, and wrap tightly in plastic wrap. Refrigerate for at least 1 hour or up to 3 days, before rolling out and baking.

2. Preheat the oven to 425° F. Place on of the dough discs on a lightly floured surface, and roll it into a 12-inch circle, about 3/8-inch thick. Transfer the dough to a 9-inch pie plate, trim the excess and crimp the edges. Line the dough with foil and weigh it down with pie weights (I like to use pennies!). Bake until the crust is light golden brown, about 30 minutes. Remove from the oven and allow to cool. Reduce oven temperature to 375° F.

3. While the pie crust is baking, prepare the filling. In a large bowl, combine the apples, dulce de leche, lemon juice, vanilla, both sugars, cornstarch, salt, cinnamon and nutmeg – until everything is evenly distributed. Remove the foil and pie weights from the baked, cooled pie crust and gently spoon the filling into it.

4. Place the second disc of dough on a lightly floured surface and roll it into a 12-inch circle about 3/8-inch thick. Place the top crust on top of the filling, and, using a knife, or kitchen shears, trim away excess, leaving a 3/4 inch overhang. Fold dough under itself, pressing it into the bottom crust so that the edge of the fold is flush with the edge of the pan. Flute edges using thumb and forefinger, or press with a fork.

5. In a small bowl, lightly beat together the yolk and the cream. Gently brush the eggwash on top of the pie crust. Using a paring knife, make a few slits in the pie crust to allow for steam to escape. Sprinkle demerara sugar on top. Bake the pie for 30 to 40 minutes until the edges start to turn golden, then reduce the temperature to 350° F and continue to bake until golden brown. Remove to a wire rack and allow to cool for 1 hour before serving.