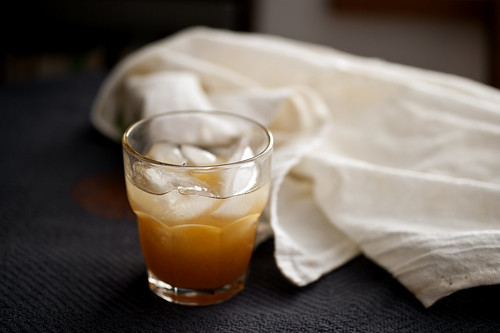 For all my talking about being a bourbon lover, I am an embarrassingly pathetic (read: light) drinker. And Andrew is no better. Between the two of us, it takes us about three days to finish one bottle of wine.

Around this time of year, however it’s not the wine I want, however pitiful my consumption is. I lovingly refer to these few months as “Brown Liquor Weather”, but there again, I lie. You just imagine that I fix Andrew and me a nightly cocktail to warm ourselves up, but here is the germane truth: we usually just stick to water with our dinner. While I fantasize of our indie Brooklyn nights, with Ella Fitzgerald or Thelonius Monk in the background, sipping on fancy cocktails, in reality our nights are quite tame and decidedly uncool. Dinner is usually followed by some nerdy television, or oftentimes, more work.

But this drink here is the closest thing to turn us into bonafide drunks. If anything will do it – it’s this very concoction, a rather common drink called the Stone Fence. 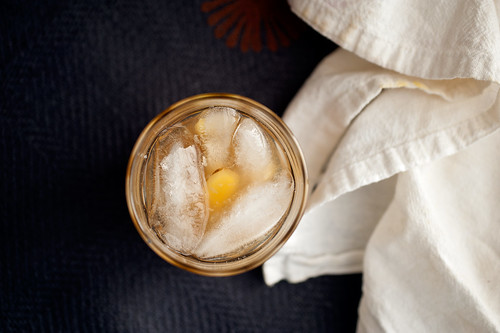 When I first learned of it, I fell for the name immediately. It made me think of the Robert Frost poem “Mending Fences”, which has nothing to do with cocktails or bourbon or drinking for that matter. What it talks about, in Frost’s famous use of synecdoche (or some might argue metonymy, as I recall some poetry classes from years past), is fences. And how they, supposedly, make good neighbors. Or do they? It’s not literal, of course, and it gives you pause, just thinking about it. As far as poets go, I’ve always had a thing for Robert Frost and his remarkably low-key, but really sad life. I wish I’d known him, spent time with him in Vermont, learned from his wisdom. I could see us going on walks together, or tending to his garden, or reading to each other out loud. I’d be a better person for it.

I won’t, however, be a better person drinking lots and lots of the Stone Fence cocktails, which is something I really want to do all the time. They pose a dangerous, slippery slope, I think, especially when Andrew and I have the following conversation. 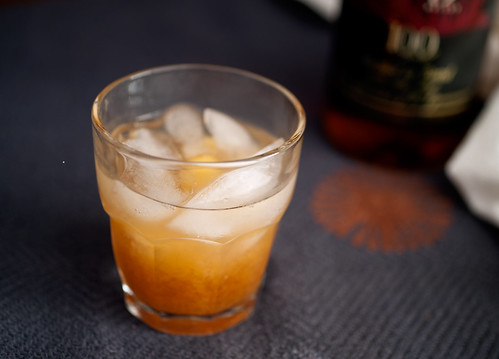 So just picture Andrew going off to work, filling up his mug with some Stone Fence, and arriving to the office generously sloshed. Something tells me that his day might go really quickly, but I can’t vouch for his productivity.

The standard Stone Fence is a rather simple concoction using just two ingredients: apple cider and bourbon over some ice. If you’re going to a stickler for historical details, then David Wondrich, aka one of the foremost authorities on cocktails history, will tell you that the drink dates back to the late 1700s, when the British and the armed colonists were, shall we say, disagreeing with one another. As in with guns. So, I presume the cocktail, originally made with rum and hard cider, served as liquid courage of sorts. But more often than not, these days when you ask for a Stone Fence at a bar, you’re likely to get rye or bourbon over rum.

And I most definitely prefer bourbon or rye over rum, just about any day. And I wanted to give the drink a bit more dimension, not that there’s anything wrong with its elegant simplicity; it’s just that my taste buds were craving a bit more.

Andrew, who was working from home that day, tasted it a bit, but declined to finish it. He looked at his watch, pointed out the time to me (gee, thanks honey!), and retuned to his desk. I, on the other hand, thought that wasting this fantastic cocktail would surely be a sin. I’m sure you figure out what happened.

It was a famous afternoon, indeed.

The Stone Fence (Plus!)

1. In a medium saucepan, over high heat, boil the cider until it has reduced by half to 1 cup, about 20 minutes. Cool over an ice bath until at room temperature
2. Combine the cider, bourbon, lemon juice, maple syrup in a medium bowl. Divide among 4 8-ounce glasses, add a few ice cubes, and top each glass with a splash of seltzer. Garnish with ginger slices. Serve immediately.