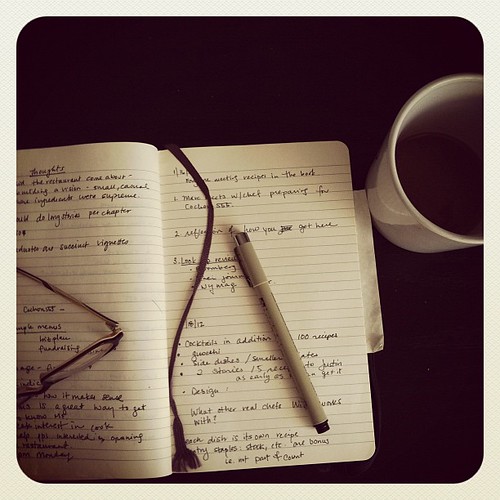 As I write this today, I have one thing on my mind – taking risks.

A year ago today, I left my job in finance. Actually, technically that was a year ago yesterday. A year ago today, I woke up, showered, got dressed, and set off to Melissa Clark’s house to work as her interim assistant. On January 31st, I was packing my desk and signing separation agreements, on February 1st, I was chopping garlic. It couldn’t have been a transition with less fanfare, but to me, that was the best way to plunge into the unknown. No time to sit and pontificate – there was work to be done and things to be learned.

Last night, as we were clearing the table, Andrew looked at me and said, “If a year ago, I had told you you’d be where you are today, working for amazing people, finishing one book and starting another exciting project, would you have believed me?”

No, I wouldn’t have. I probably would have laughed and hugged him, grateful that he believes in me as much as he does.

My old therapist says that we should believe in ourselves just as much. She says that if we had a friend who doubted us as much as we, at times, doubt ourselves, we wouldn’t even speak to that person. And she’s right. Who wants to be friends with someone who undermines and second-guesses her?

I don’t want to wax poetic and say you’ve got to do what you love. It’s not my style. Everyone has to choose a path that is right for them, whatever it means to them. For me, it meant jettisoning my career on Wall Street and plunging, head first, into the world of food and writing.

I don’t celebrate this blog anniversary because I’m too lazy to really figure out when it began. And I’m often remiss in remembering important dates. But February 1 will always be a special day in my heart. The day I took a leap hoping that the universe had a net for me to fall into.

It’s been a glorious fall thus far. I can’t wait for more.