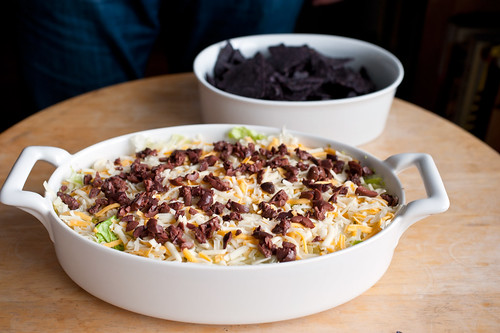 I was all ready to write about grapefruit cake until I realized it’s about one week to the Super Bowl. Suddenly, instead of homey cakes and cup of tea, I am craving wings, chili, and beer. Oh, and seven layer dip.

It’s funny to me that in our relationship, I am the one with the football affectation. I insist on watching games, and I even downloaded one of those apps on my phone that tells me what the score it, in case I can’t watch the game in person. Andrew on the other hand, flips through geeky weather magazines while the game ensues and watches the game out of the corner of his eyes. This year, however, the Super Bowl is particularly important to us because our home team, the New England Patriots (now, don’t y’all Pats haters be hatin’) are going to square off against the New York Giants. The last time that happened, Pats suffered an abysmal loss, having totally fallen apart in the second half. Hopefully, that won’t happen again. 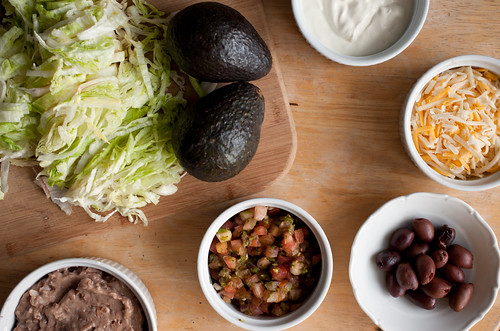 I might be admonished by seven-layer-dip-purists who might balk that I actually didn’t go ahead and make proper refried beans. It was a conscious choice, however, one that I’ll make again and again because, quite frankly, I prefer the mashed cooked beans to refried ones, particularly if they come out of a can. Never a health nut, I am keenly aware the Super Bowl foods aren’t exactly light, and since I don’t exactly miss the “refried” part I don’t really need it in a dip that offers lots of other layers (six to be exact!) and flavors. 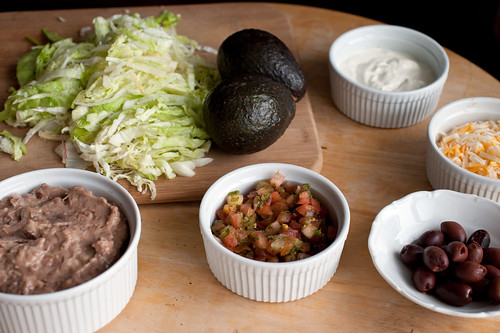 This is also, perhaps, the one time when salsa from a jar works better than the fresh salsa you make with tomatoes (which are sadly out of season). The liquid, soupy consistency of a jarred salsa is the perfect texture to combine with the creamy guacamole, tangy sour cream, and sharp bite of cheddar. 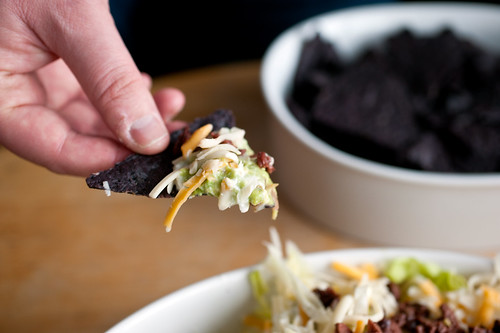 And now, that I have this football snack sitting in my fridge, and it’s Friday morning, and it’s just the two of us working in the apartment, I ask you, is it safe to leave seven layer dip to two people who can eat it in its entirety? I didn’t think so. I’m off to padlock the fridge door.

By all means, if you want to make your own salsa, go ahead. And if you want to make your own refried beans, Elise offers an excellent tutorial. If you are feeling pressed for time, canned refried beans will work just fine. Don’t like one of the layers? Swap it out for something else. Andrew’s cousin, Mike, who made a hysterical, awesome video on how to make his seven layer dip, uses mango as one of his no-longer-secret layers – looks amazing. Whatever works for you, so long as you enjoy the dip, the game, and have plenty of frosty beer on hand to pass to your thirsty guests.

1. Cover the beans with enough water that it has 1 1/2 inches of water on top. Cook beans, uncovered, stirring from time to time about 1 1/2 hours until tender and most of the water has been absorbed. With a potato masher, mash the beans until they are mostly smooth. Season with salt and pepper to taste and set aside.

2. In a medium bowl, mash the avocados with the tomatoes, jalapeno, onion, cilantro, lime zest and lime juice until it becomes chunky guacamole.

3. In a medium, deep casserole dish (3 quarts works best), spread out the pureed beans in an even layer. Top with salsa, guacamole, sour cream, lettuce, cheese, and olives. Serve with corn chips and plenty of cold beer.