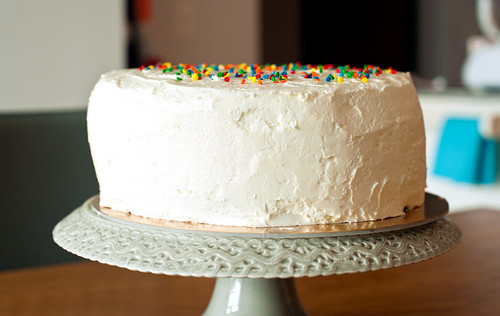 Generally, I’m pretty happy with any cake, chocolate or otherwise, but if I had my druthers, my perfect cake wouldn’t have a trace of chocolate in it. It would be vanilla and citrus all the way. 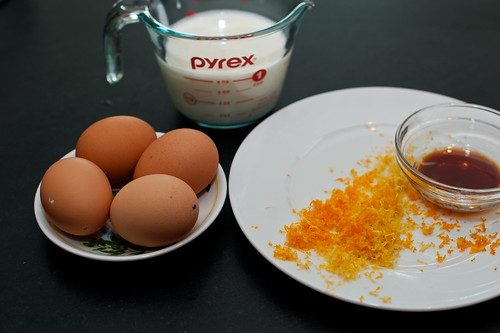 This cake here, this cake, is four years in the making. You know how some people want to perfect a yellow cake for a birthday party, or, since we were just discussing chocolate, a chocolate one for that matter? All I’ve ever wanted for my birthday was a lemon layer cake with butter cream frosting and tart, bright curd. But my simple lemon dreams were proving to be not so simple. It took me years to figure out what I wanted in a lemon layer cake. Butter – not oil; buttermilk – not milk; cake flour – not all-purpose flour. These might all be obvious things, but I learned them through trial and error, which were lessons I viscerally learned. 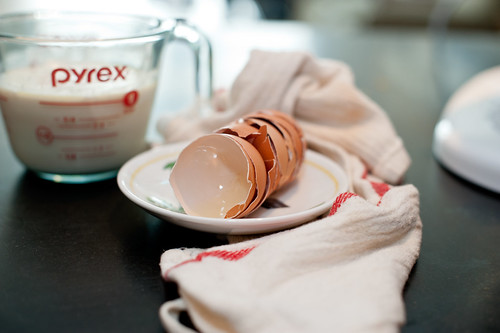 When I moved to Chelsea into a tiny shoebox of an apartment with kitchen possessing a single counter no bigger than a regular cutting board, the first thing, the very first thing I made in that kitchen was a lemon layer cake replete with the curd and the frosting, but sans sprinkles. It was just an okay, entirely forgettable, dryish, gloppy sort of an affair. I forced myself to sample a few bites and threw the rest in the garbage. 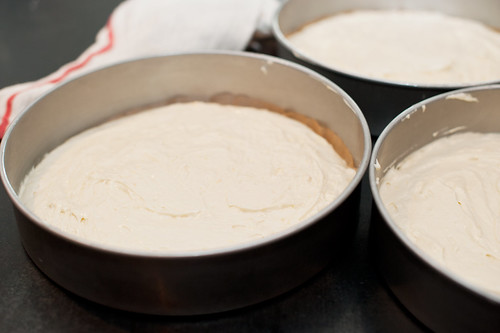 Then I tried to make the cake again (tinkering with the recipe) in anticipation of my birthday, 2009 just wasn’t a very good year for birthdays. Let’s just say I got to know the Mass General oncology wing like the back of my hand. That year, in between hospital visits, I made a simple lemony buttermilk cake, ditched the frosting, and ate the whole thing myself, though not in one sitting. Then a few months later, I moved to Brooklyn and lost the recipe in the move. 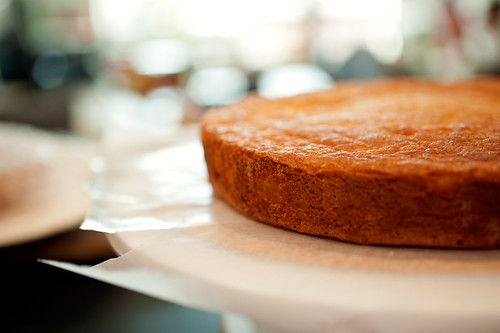 That I didn’t produce a cake two springs ago, I hold Andrew responsible for distracting me (even though, technically we reconnected after my birthday, but I can still blame him, can’t I). My notes and recipe edits to the lemon layer cake from 2010 were filed away for another year. And it wasn’t until last year that I got around to playing around with this cake again. I was helping Melissa Clark with putting together the Paula Deen’s Southern Cooking Bible, when I found this cake, and naturally, all I wanted to do is write about it immediately. I wanted to shout from tops of the mountains, err, New York City skyscrapers that for everyone out there searching for the perfect lemon layer cake – the search was over. But I couldn’t – the book wasn’t out yet. So I wrote up the recipe, made a few notes of my own, and filed it away for the following year. 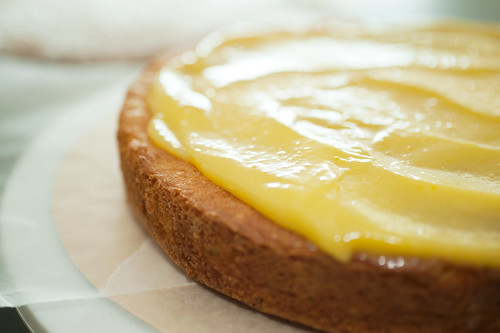 And guess what? It’s the following year – already.

This cake is perfect in every way; it offers everything you could possibly want in a layer cake. Delicate, moist crumb – check; mouth-watering, tart citrus curd – check; buttercream that tastes like the lightest, most delicious lemony cloud – check. Incidentally, adding egg whites to your buttercream is something that I highly recommend doing. It makes the frosting taste deceptively light, and as an added bonus, I found it a bit easier to spread too. It took all the self discipline I possessed not to cut myself a slice immediately after I finished frosting the cake. 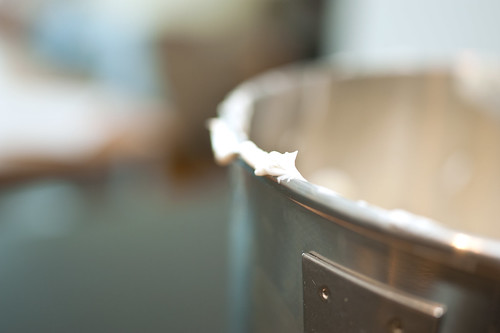 Instead, I boxed the cake-of-my-dreams up and brought it to my picnic-in-the-park birthday party where it was gone in mere minutes – not even a single crumb was left. The only evidence of a cake present minutes ago were a few rainbow sprinkles and a couple of frosting smudges – a cake success if there was ever one. 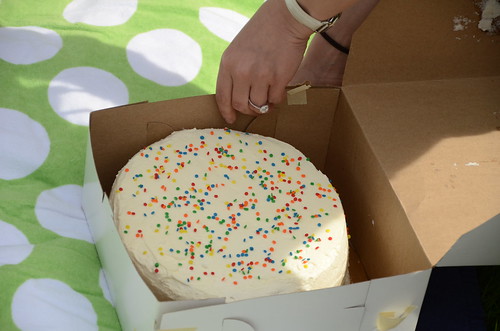 *[Bonus points to whoever can tell me where that line is from. Were I not working on a book and planning a wedding at the same time, I’d promise baked goods. Sadly the points have to suffice.]

This cake is also, unfortunately, known as the General Robert E. Lee Cake. Sadly, General Lee was on the wrong side of history when he fought in the Civil War on the Confederate side. He was almost tried for treason and had his civil rights revoked.

1. To prepare the lemon curd filling, in a heavy-bottomed saucepan, whisk together eggs, egg yolks, sugar, lemon juice and lemon and orange zest. Place the pan over medium heat and stir constantly until the mixture thickens enough to coat the back of a spoon, 10 to 15 minutes. Off the heat, whisk in the cold butter. Strain through a fine mesh strainer and cover the surface directly with plastic wrap. Make sure that plastic wrap is right up against the lemon curd filling so that it doesn’t form a skin. Refrigerate until thoroughly chilled, at least 2 hours.
2. When you’re ready to prepare the cake, preheat the oven to 350°F. Grease 3 (9-inch) round cake pans with butter or spray with cooking spray and line with baking paper.
3. In the bowl of an electric mixer fitted with the paddle attachment, beat butter on medium speed until creamy and smooth, 1 to 2 minutes. Add sugar and lemon and orange zests and beat the mixture until light and fluffy, about 5 minutes. Be sure to scrape down the sides of the bowl occasionally to incorporate all the sugar with the butter. Add eggs one at a time, beating well after each addition.
4. In a medium bowl, whisk together flour, baking powder, baking soda and salt. In a small bowl, whisk together buttermilk and vanilla. Beat the flour mixture into the egg mixture in three additions, alternating with the buttermilk mixture and beginning and ending with the flour. Mix just until incorporated and scrape the sides of the bowl down occasionally. Spoon the batter evenly into the prepared pans, smoothing the tops. Bake about 23 to 25 minutes, until a toothpick inserted into the center of the cakes comes out clean. Let cool in pan 10 minutes. Then remove from pans by inverting and peel off baking paper. Thoroughly cool your cakes on wire racks before frosting them.
5. While the cake layers are cooling, prepare the buttercream frosting. In the bowl of an electric mixer fitted with the paddle attachment, beat butter on medium speed until soft and creamy, 2 to 3 minutes. Beat in the lemon and orange juices until combined, about 1 minute. Place in a small bowl and clean out bowl of electric mixer.
6. Place a medium saucepan of barely simmering water on the stove. In the bowl of the electric mixer fitted with the whisk attachment, whisk together egg whites, sugar, cream of tartar and salt on medium speed. Set the bowl over the pan of simmering water and whisk constantly until the mixture registers 140°F on a candy thermometer, about 10 minutes. Set the bowl on the mixer and beat on high speed until the mixture has cooled and soft peaks form, 5 to 10 minutes. Add the creamed butter 1/4 cup at a time, beating well after each addition until smooth.
7. Once the cake layers are cool, assemble the cake. Place one cake layer on a serving plate, with the flat bottom side facing down. Spread half of the lemon curd filling over the surface of the cake. Top with another cake layer, inverted, so the bottom of the cake is facing up. Spread remaining filling over this cake layer. Place the remaining cake layer, also inverted, on top. Spread the buttercream frosting over the top and sides of the cake. And then just try not to cut yourself a piece before the guests come over.