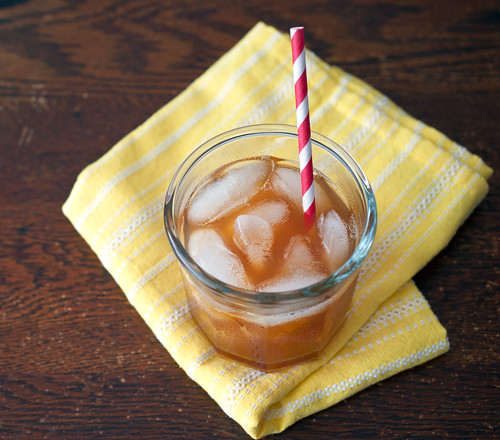 Summers are for Arnold Palmers. And despite the fact that I have little appreciation for all things golf-related (I hope my father-in-law forgives me!), I have a fondness for a certain Mr. Arnold Palmer and for the legacy he has left behind. His signature drink, half iced tea-half lemonade, is my preferred summer concoction.

At our wedding, which is ten (10!) days away, we are serving his and her signature cocktails. We went with the Bee’s Knees for Andrew’s drink. He’s a gin guy and the cocktail is a lovely way to highlight both: gin and the start of summer. It’s lemony, it’s uplifting, and even gin-haters like to drink Bee’s Knees!

I, on the other hand, have always been a bourbon girl. Before it was cool to like bourbon, before artisanal bourbon became trendy, before there were specialty bourbon bars in Brooklyn, before I could even afford decent bourbon, I liked bourbon on the rocks. In college. This might seem like I’m suggesting that I was the original hipster, that somehow I knew a cool thing when I saw one, that I had this advanced palate, but really, I promise you, this is not a disingenuous way of me suggesting, even for a second, that I knew cool before cool knew cool. I didn’t. I still don’t. I just like love bourbon.

Good bourbon is a thing of beauty and complexity. There are notes of caramel and smoke, leather and oak. The notes are playful; they appear and recede on your tongue. 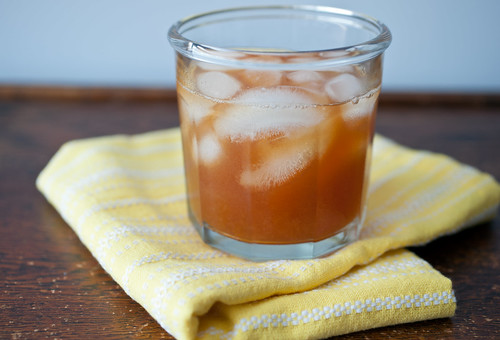 Years ago, a good friend of mine stayed at my apartment for a few days. He is a delightful, funny, brilliant guy that I don’t see or speak to enough. He is also a terrific co-reciter of “The Goblin Market” in coffee tawk*** style (Hi, Brian!). As a thank you, (which was unnecessary), Brian gave me a bottle of port and a bottle of Van Winkle limited edition bourbon. How he got his hands on that bottle, I, to this day, don’t know, because every time I ask any store about it, they just tell me they get 3 bottles at a time, and they are spoken for before they even hit the shelves. I cherished and treasure that bottle, and it remains, by far, the best bourbon I’ve ever tasted. And I’ve tasted many.

Anyway, you get it – I like good bourbon. But for a cocktail, you don’t want to use your top shelf bourbon because you’ll lose the spirit’s nuances. You want good bourbon that will blend well with your ingredients and will be, actually, complemented by them rather than upstaged. In other words: not Wild Turkey but not Buffalo Trace either.

And this is where Bourbon Arnold Palmer comes in. Something like Maker’s Mark is perfect as a splash (or two!) in an Arnold Palmer gives this drink a little bit more heft and depth. The sweet, round caramel notes of bourbon add to the sweetness of simple syrup. While more commonly vodka is added to the drink, making it a John Daly, I think that bourbon goes better with the iced tea-lemonade blend than vodka does. At least, that’s this Russian’s opinion anyway.

***[you’re welcome, for that Mike Myers, Madonna, AND Rosanne clip.]

At the wedding I’ll be going with a splash of bourbon and no more. After all, with cocktails preceding the ceremony, who wants a sloshed bride? It might be a great YouTube video, but I’ll save my family the embarrassment. If I was fixing myself a cocktail on a summery afternoon, you can bet that I’d go with two splashes of bourbon. What’s a splash, you say? I’ll leave that to you. Some folks like their drinks diluted, while others prefer them on the stiffer side. I won’t judge you, I promise. I do, however, highly recommend that you make your own iced tea and lemonade. It might seem like much ado about nothing, but I promise you: your final cocktail will taste so far superior to anything you’ll get from premade ingredients. Also: as a busy bride I can tell you this: squeezing lemons is not only a great workout for your forearms, but also makes for a terrific stress relief.

Make the Simple Syrup:
In a small pot, combine the sugar with 1 cup of water and bring to a boil. Remove from heat and refrigerate until needed. Simple syrup can be refrigerated for about 2 weeks.

Make the Iced Tea:
Place the tea in a pitcher and pour the boiling water over. Set aside and let the tea steep for 5 minutes. Remove (strain if using loose tea) the tea bags and refrigerate the tea until cold.

Make the Lemonade:
In a nonreactive glass jar, combine the Simple Syrup (or the honey syrup) and the lemon juice. Refrigerated until cold.

Make the Bourbon Arnold Palmer:
Fill a large glass with ice and fill halfway with tea. Fill almost halfway with the lemonade. Add a splash (or two) of bourbon and stir. Serve immediately.