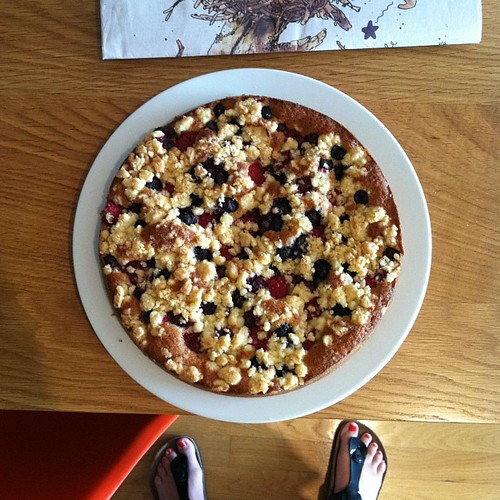 I have started to write early in the mornings in hopes of getting into a habit of writing. That said, in the spirit of disclosure, today is the first such morning and I’ve squandered almost all of it. I say that I’ll start writing in the mornings quite often, but rarely do I actually follow through. I do it sporadically, but Anne Lamott encourages us to get into the habit, and that’s where I fall short – the habit.

I was supposed to wake up at 5:30 and now it’s 6:19 and in eleven minutes Andrew’s alarm will go off. It’ll sound like aliens are invading our apartment. He’ll let it go for a minute or two before turning it off and then another alarm, this time it will sound like someone is practicing playing scales, will go off again. He’ll finally, slowly, deliberately, get out of bed around 6:45 and shuffle into the living room. Forrest will greet him loudly, meowing indignantly. I think what he’s trying to say is, “I’ve been up for hours, why haven’t you gotten up yet? Man up!” And since Forrest doesn’t speak English (or human for that matter) I guess we’ll never know.

Anyway, Andrew will get up and shuffle around the kitchen bedroom area, which in our tiny Brooklyn apartment are RIGHT NEXT TO ONE ANOTHER because, hey, it’s logical to have your kitchen next to a bedroom. On weekend mornings, when I’m up early and before I take off for the farmer’s market, I sometimes like to bake a morning muffin or something. This isn’t to say I’m some superwoman who gets up early and does a dozen things before the rest of the normal, children-less world gets up. I blame my small bladder and the cat: a) I am too neurotic and anxious to go back to sleep once I have to pee the morning, and b) Forrest, as if knowing it’s the weekend, sits on me until I get up and feed him. I capitulate either way.

So I try to do something, you know, productive. I soften my butter and bring my eggs to room temperature. I measure out my flours and sugars and other dry ingredients. All that – quietly. But then the whir of the mixer (you’d think) is so loud, it can raise the dead. But not Andrew. Andrew sleeps through it all and doesn’t budge.

Once Andrew is up and shuffling, my writing hours are over. Then it’s breakfast and morning news and then, when he finally leaves for work, it’s work time for me. Or gym. I can’t work out immediately upon waking up because I feel like, and probably resemble, a zombie. Something about having very low blood pressure, I first need to have some coffee and time before I’m asked to do two hundred squats while rotating a kettle bell about my torso.

Writing, while I feel positively awful, seems to be the only thing I can do. I can do it sitting down; I don’t have to lift anything heavy; there’s no dance music blasting into my ears.

But I wonder what I should be writing about. Someone once said about Nabokov that he was a good writer but didn’t have anything to write about. And while Nabokov was a certain literary genius, having read most of his novels, I kind of know what that person meant when they said that. It’s all, strangely, substance-less. I’m excluding Lolita from the mix because that book, still, breaks my heart.

What happens, when you don’t have anything to write about? What does that mean? Do you stare at the computer screen and just type out a single letter until something comes to you?

And then when you tire of one letter you can move on to the next:

Until you run out of letters. And then it starts all over again.

Until something comes to you. But what if nothing does? Haven’t you ever had a completely vacant brain, devoid of any thoughts?

Today, I am sufficiently rambly, which suits me just fine. Is rambly even a word? It is now.

But this morning, rambly as I may be, I am sad. I was sad last night when I went to bed, but I couldn’t put my finger on it. I read about Nora Ephron passing away and it made me sad, but this morning I feel a different kind of sadness. A I-feel-like-I-lost-a-friend sad, even though we never met and didn’t even run in the same circles.

In a way, though, Nora Ephron has been in my life as long as I’ve been living in America. “When Harry Met Sally” came out the year we arrived in the United States, and that movie was a little bit like the cinema equivalent of the comfort of mac-n-cheese for me. I was always in the mood for it, and it always made me feel better. It made me fall madly in love with New York and decide that I was moving there after college.

Years ago, I had found the movie to be funny and witty, but as I got older I found it to be bittersweet. There was heartbreak and anxiety in it; the kinds of things you feel when you’ve lived through a few of those experiences. And it was laugh-out-loud funny and spot on. And I’m not even talking about everyone’s favorite orgasm scene.

In my favorite scene from the movie, Harry asks Sally about the story of her life. She replies that the story of her life won’t even get them out of Chicago because her life hasn’t started yet. She’s moving to New York so things can happen to her. A few minutes later, Sally tells Harry that she plans on being a journalist. And in a line only Nora Ephron could have written he responds, “So you can write about things that happen to other people.” Game. Set. Match.

I loved “Sleepless in Seattle” and defended my right to like it to movie snobs. I’d also like to point out that no one writes good romantic comedies anymore. And no, it’s not a contradiction in terms. Why can’t you watch a feel-good movie and like it? But Nora Ephron got it. She wrote funny, human, and ultimately happily-ending scripts, something a lot of movie buffs scoff at. But isn’t definition of comedy (in the literary traditional sense) – is that of wish fulfillment?

For the record, I also loved “You’ve Got Mail”. You want to judge me? Go ahead.

Eerily enough, we had just read “I Feel Bad About My Neck” with my book club ladies, and even though, according to Ephron, I’m about ten years away from feeling badly about my neck, I knew a bit of what she meant. I’m thirty-four and you know your body starts to change, inexplicably, around thirty. My old boss warned me about it. She said, something happens, you’ll see.

In the last two years, I’ve been finding this odd jiggle in the back of my arms. I work out and I do all those tricep things they talk about in fitness magazines, but the jiggle persists. When my arm is squished close to my body, you see an odd dimple in the center of it: where did it come from? And what can I do to make it leave?

I say this because my whole life I had those rail thin arms that looks like twigs. Not anymore. Things change as we age and it is what it is. I loved Ephron’s humor about it: No matter the potion, no matter the frequency of your facials, no matter how much you spend time at the gym – you will age. It will happen. There’s degeneration.

As for Ephron’s prose, I loved it. It was simple. It was uncomplicated. It was to the point. And it had heart. She said once that she learned the lean prose from her days at the New York Post, where you had to write short, succinct sentences. Whatever it was – it worked to her favor.

I read her obituary this morning and cried into my coffee. Cried. Over a person I never met, but felt like I had. I suppose many of us feel this way about Ephron – she wrote and made it sound like she was your close friend and confidante. She knew you, and for us, New Yorkers, she knew, and loved, New York, to an almost crazy you-can’t-live-anywhere-else extent. Those of us who live her and are, in some way, afraid to leave, know what she meant. Our attachment to our neighborhood where everything is just perfectly so, borders on fanatical.

Take where I live, for example. There’s a Trader Joe’s across the street. Less than half a block away, there are a handful of Middle Eastern stores where I can get the most amazing lavash, hummus, and baklava, among just a few. There’s a vegetable store that sells house-made kimchi that is to die for. There are two farmers’ markets within walking distance. There’s just about every subway line, a view of Manhattan ten-minute walk away. My favorite (and cheap) nail salon where I get a $60 quality pedicure for $30 (their regular pedicure is $22). There’s a amazing, independent bookstore a block away. There’s a movie theater and a Barnes and Noble across the street. There’s a frozen yogurt place in my building. There’s not one but two hardware stores, should I one day decide to build shelving in the apartment. There’s a great kitchenware store half a block down the street. I could go on, but you get the idea. Where else will I have all that within a two block radius?

But Ephron knew and she wrote about it.

She wrote about things we don’t really even think about, but after reading them you’d start thinking about them constantly. That whole thing with the neck? I now examine it every morning with morbid curiosity. I want to catch the exact moment when it goes.

And I know that when it does, I’ll look up and Ephron will be looking down at me (and other ladies doing the same), and possibly nod and shrug in the well-that-was-inevitable sort of way. And then I’ll go an buy a hundred black turtlenecks.

[That picture above is a cake I’m trying to develop a recipe for – stay tuned, I’m awfully close! Sorry to be such a tease.]