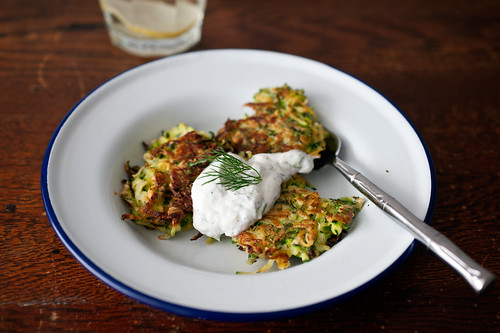 Hi. Happy almost Fourth of July. It’s appropriately hot out there and I hope each one of you is either hosting or attending a cook out of sorts.

Today, I come to you with zucchini and green garlic latkes. It doesn’t sound particularly patriotic, I’m sorry. But I have a book due in less than a month so you can understand when the best laid plans go by the wayside.

I was hoping to have a berry fool for you that featured red, white, and blue colors and was one of those desserts you could whip up for company all the while avoiding the stove. Who wants to add heat to the crazy heat wave that we already have?

But the weekend came and went and I spent all of it, or just about all of it, proofing another galley for The Kimchi Cookbook, and dutifully typing those edits up. There was also a cake of unspeakable greatness, but that’s a story for another day.

Speaking of The Kimchi Cookbook – it is now available for pre-oder here, here, and here. You can see my name on the cover (ta da!) and eventually it’ll also show up in the database search for these stores – there’s some kind of a technical glitch that the good folks at Ten Speed Press are ironing out. 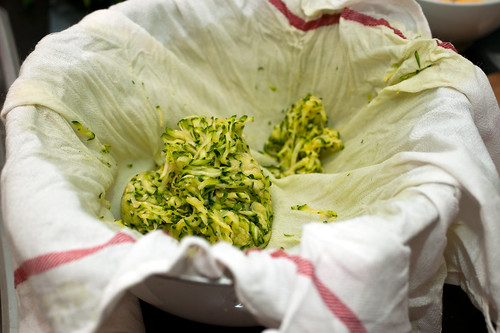 But to the point: I suffer from a perennial problem – I always want what I can’t have. But only if it has something to do with food.

If it’s winter, I am dreaming of watermelon sorbet and honey bourbon caramel pie. If it’s spring, I want a Thanksgiving turkey. And in the summer, I start missing Hannukah, or to be specific – latkes.

I want to be clear: I don’t miss being cold, or having to put on sweaters and coats and taking ten whole minutes to leave my apartment just to pick up milk. It’s so much easier when you don’t have to bundle up. But I miss the idea of eating winter foods in the summer despite the fact that all I really want on my plate is either sushi or watermelon. 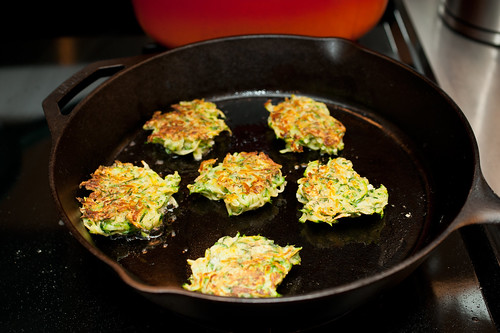 My general rule of thumb is that if you can make it into a patty, it’s a vegetable, and you can fry it – you can make a latke out of it. While in December, I am besotted with the original potato latke, who is to stop me from making every possible different kind the other eleven months out of the year?

If you’re the kind of person who considers himself a purist and the idea of a non-potato latke sounds horribly blasphemous to you, forgive me. For the rest of you – you should make them for dinner. Or lunch. Or just as a snack. Dressed with a dollop of lemony-dill yogurt, they are exceptional and addictive.

There’s not much to say on these except they’re ridiculously addictive. And they’re mostly zucchini if you think about it. If you’re averse to dill, you can swap in parsley instead. Maybe your Greek yogurt will have a mixture of parsley and mint in it. Play around with the flavors and find the one that best appeals to you. The baking powder trick is from the one and only Melissa Clark – it’s her trick to a crispier latke, which is particularly useful if you’re dealing with a “wet” vegetable such as a zucchini. Green garlic might be out of season, depending on where you live, but garlic scapes, which are available at greenmarkets everywhere they sell garlic, are long curly green strands that are 1/3-inch thick and look like a messy bundle of shoots. Here some pictures to show what they look like.

1. Trim the ends off zucchini and grate them using either a box grater or a shredding attachment of the food processor. The latter method will be faster and actually works out in better, longer strands: a method I prefer for the zucchini latkes, but not for the potato ones. Transfer the shredded zucchini to a large bowl and combine with salt. Let sit for 15 minutes. Transfer the salted, now more liquid filled zucchini mixture to a clean kitchen linen or flour sack towel (don’t use the terry ones because they are not great for wringing), twist the towel into a bundle and squeeze out as much moisture as your strength will allow. (Also a great arm workout!)

2. Return the squeezed out zucchini back to the bowl and adjust the salt if necessary. Add the flour, dill, eggs, green garlic, baking powder and pepper, and mix to form a loose, messy batter.

3. Preheat the oven to 200 degrees F; position the rack in the middle. In a large skillet set over medium-high heat, warm enough oil to cover the bottom of the pan until it shimmers. Drop small mounds of batter onto the pan allowing about 1 1/2 inches of room between the next mound. As you put that first batch of latkes onto the pan, reduce to heat between medium or medium-low: you want your pancakes to slightly sizzle when they cook, not fry aggressively – that way they actually cook through and brown gently instead of burn. Gently flatten the top of the mound with a spatula – but don’t get aggressive: flattening the latke too much will result in a dense, less crispy fritter. Let the latkes cook for about 3 to 4 minutes, depending on your heat intensity, or until the bottom that is cooking is golden brown. Using a fish spatula (I find these to be best with latke/pancake flipping) flip the latkes and cook for another 2 or 3 minutes. Again, gauge the browning process, and if necessary, sacrifice a latke for a taste test – you’re earned that right.

4. While the latkes are cooking, using a fork, whisk together the yogurt, dill, lemon juice, zest, salt, and pepper in a small bowl until all the ingredients are well combined. Set aside while you finish cooking the latkes.

5. Serve the latkes with the yogurt sauce on the side. If you want to keep the latkes warm while you are cooking them, place the cooked latkes onto a shallow baking sheet and transfer the sheet to the preheated oven. When all the latkes are cooked, serve at once.