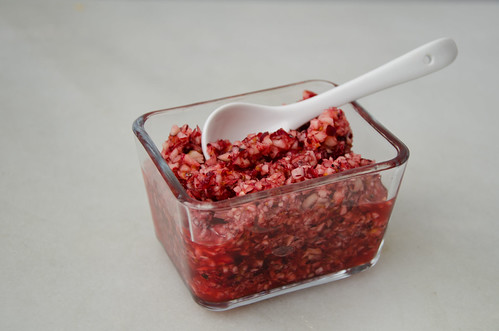 As most people’s thoughts turn to Thanksgiving (now that the election is over – we voted; did you?), I’m about to say something unpopular: I’m a little tired of traditional cranberry sauce. This might sound strange coming from someone who stuffs cranberries into snacking cakes and tucks them into banana bread. It’s not the cranberries themselves—it’s cooking them that I am objecting to.

Something changed about my palate this year. For one, I can’t get enough Spanish food (and in fact, I think about it all the time). We’ve a neighborhood restaurant that makes tapas-style Spanish dishes with Moroccan and Jewish influences and I might as well carve my name in one of their seats, I’m there so often.

And in additional to my newfound Spanish food obsession, I’m less than excited about the cooked (or canned) cranberry sauce. No matter what spices and flavors, to me (this year at least) cooked cranberries lack the bright pop of the fresh ones. And a pop is something I will very much need come Thanksgiving: if it’s this cold now, wait until a few weeks from today.

I needed that bright “pop” badly the day I was testing the recipe. We had just discovered the moth invasion had exacted vengeance upon my collection of beloved and somewhat pricey sweaters (purchased back in the day when I had a steady-paying job). We’ve known for a while of the moths’ existence and chose to battle them with “natural” remedies; we were reluctant to inhale chemicals (also didn’t want to smell like an old lady) and also didn’t want to accidentally poison Forrest, were he, by chance, ingest something and keel over. Finally, and this is such an embarrassing admission: we were hoping the moths were just all talk and no action.

So it was in this deflated state that I took my cranberries, married them with some pomegranate arils, sprinkled some sugar, and drizzled some Cointreau. I then zested and juiced and orange, ground a little black pepper for an extra kick, and threw in a pinch of salt. All that pulsed in a food processor a few times, and when I tasted the resulting relish, I couldn’t help but smile: it was the exact bright and clean flavor that I was looking for. And it took, maybe, three minutes. 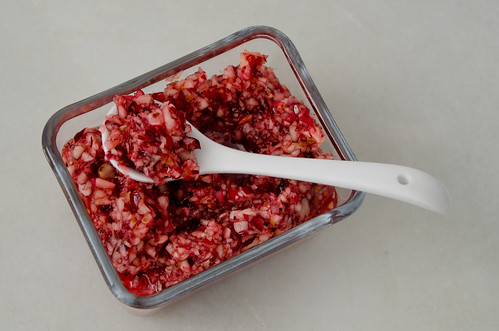 There was a tiny piece of leftover turkey leg in my fridge, and I dipped it into the relish to see if the experiment was worth it. It blew my expectations—the combination was far better than I expected.

And for a few blissful minutes, I forgot all about moths and sweaters with holes. Then, reality set in. I sighed and walked over to my computer to order some vacuum seal bags to battle the small, winged enemy in our apartment.

Place the cranberries, sugar, pomegranate, Cointreau, orange juice and zest, pepper, and salt, in a work bowl of a food processor fitted with a blade and pulse a few times until the fruit becomes ground but still somewhat chunky. Taste and adjust sugar/acid/salt/pepper according to your preferences. Serve immediately, or better yet, refrigerate for at least 1 day and let the flavors marry.

The relish will keep, refrigerated, for about 1 week.