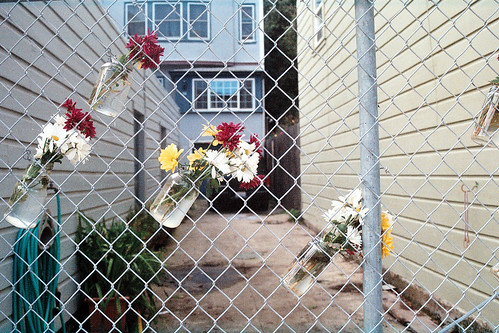 It feels almost disingenuous to write about this. What do I know of grief like this? What tragic loss, besides the death of grandparents, have I suffered? In so many ways, my anxieties aside, my life has been blessed, idyllic, sheltered.

But it was so. It was true. Staring at me in black and white on the computer was the first news trickling in of the horrific events in Newtown, Connecticut. Idyllic New England. The kind with a cute white church steeple. The kind that makes you think of Robert Frost. And apples. Where absolutely nothing happens, which is why people move there in the first place. In fact, it looked just like the towns where I went to school: Marblehead and Andover. Picturesque. Quaint. Still. Everyone knows everyone, and consequently everyone knows everyone’s business, but that’s the way the townfolk like it. These are tightly knit communities.

We aren’t parents yet. But we hope to be one day. The night the shooting happened, we were at my parents’ house to mark the end of Hannukah with our families. I was getting ready for bed. All day long I felt strange, as if feeling anything like sorrow was somehow encroaching on Newtown’s grief. The parents who have lost their children. The children who have lost their siblings and friends. The neighbors struggling to help the ones grieving. That by mourning it myself, I was somehow taking their mourning intensity away.

I looked at Andrew. It was the night of the day of the shooting. When darkness descends, that’s when the ghosts come out. “How do these parents go to sleep tonight,” I asked him.

How do they move on?

How do the other children heal and move on?

How can we protect our country’s children in the future.

It is, without a doubt, a parent’s worst nightmare. Schools are safe, we think. When Andrew and I went to our middle school, a small, private school in tony Marblehead without any security in place, we felt safe. A school is a place where nothing bad can ever happen, save for maybe someone making fun of what you’re wearing or what’s in your lunch box. But that’s as bad as it got. A school, is a place of learning and order. It’s a world contained.

I like to steer clear of politics here. It’s a murky pond, politics. You stick one foot in it, and before you know it, you’re fully immersed, trying your hardest to get out and shake it off. It’s also one of the quickest ways to go from a friendly conversation to losing and alienating people. We’re all steadfast in our beliefs and I try to be respectful of others’ views no matter how much I might disagree with them in private. I’m also no constitutional scholar. Or a lawyer. Or an expert in anything legal. I have a US Constitution app on my iPhone and this is what it says when I pull up the Second Amendment.

A well regulated Militia, being necessary to the security of a free State, the right of the people to keep and bear Arms, shall not be infringed.

There are three schools of argument on how to interpret the second amendment, the language being a bit unclear and all. But the way that I always read it (and many other scholars) was that the arms in question were for the militia, which we no longer have since we have a standing army, the national guard, the police, and so on. We’re not a state defending itself from a tyrant. And, lest I let my personal opinion slip, I don’t think we, civilians, need guns. Perhaps if I lived in a cabin in the woods, I would think differently, but I live in a city and so my opinion is colored. But suffice it to say, I cannot, for the life of me, comprehend why any civilian might need assault rifles.

I struggle here on how to close this stream of consciousness that has taken me three whole days to write in starts and spurts. A lot of deleting. A lot of holding my head in my hands. Let me close with a selected piece of writing by one of my favorite writers, Thomas Lynch.

Mr. Lynch writes on loss and grief better than any writer I know of. He has some familiarity with it being that he runs a funeral home in Michigan. An undertaker by day and a writer of beautiful prose (and poetry) by night. I once went to a reading of his where all of eight people showed up. His words, his incredible poignancy moves me every time. This is part of what he wrote eulogizing the September 11th victims (full essay is here and is very much, like the rest of Mr. Lynch’s writing, worth reading).

But the bodies of the dead are not “just” anything or “only” anything else. They are precious to the living who have lost them. They are the seeing–hard as it is–that is believing, the certainty against which our senses rail and to which our senses cling. They are the singular, particular sadness that must be subtracted from the tally of sadness. So the cruelty is real, the pain of it unspeakable. It is as if, until they are returned, their deaths belong to their murderers, the media, the demographics or the larger history of the world. But if they are victims of terrorism, casualties of a widespread war, part of a national tragedy, they are no less spouses and parents, daughters and sons, dear to friends, neighbors and fellow workers who are not only missed in the general sense, but missed as surely in the flesh–in beds, at desks and dinner tables, over drinks and talk and intimacies–the one and only face and voice and touch and being that has ceased to be. And their deaths, like their lives, belong to the precious few before they belong to the many who care.

When do the missing become the dead? When do the lost become the lost forever? When does hope give way entirely to grief? When will searching no longer serve the living or the living that have died? How will each family’s lamentation be heard above the nation’s keening? Where is God in all of this? The dead, of course, do not much care. They are predictably indifferent to such details. Perhaps it is the first gift of paradise. The dead don’t care. Only the living do. Whether faith furnishes our heavens, or doubt leaves the decor up for grabs, or wonder keeps the particulars ever changing, Whomever Is in Charge There must take care of them. God is good to them, wherever God is these days. The dead who occupy these places know our hearts, our hurts and how we have searched and watched and waited for them.

We do what we do for the living’s sake. The living must decide when the time has come to cease looking and begin to mourn, to organize the liturgies of thanks and praise and affliction, to shake a fist in God’s face and say the ancient prayers. All the dead require is witness and remembrance–to say they lived, they died, they matter to us.