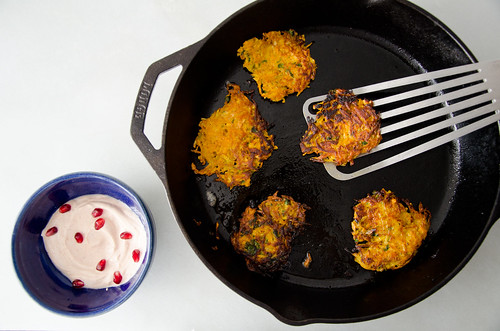 And on the fourth night of Hannukah, there was a loud groan, “We’re all potato-latke’d-out! Let there be another fritter to delight our palates!”

And so it happened. A different latke was made – and everyone was pleased.

While I might be the last person to turn down potato latkes, especially of the hand-grated variety, especially those where extra care has been applied to preserve the starch and decrease the amount of moisture; even I get to a point when a potato latke, while wonderful in its concept, needs a sexier, worldlier cousin. The kind of cousin that will teach a potato latke (generally thought of as a homebody) to wear red lipstick, listen to 80s Prince, and sneak out to go dancing all night. 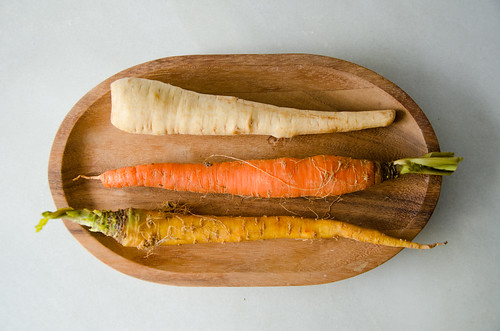 Folks, meet said cousin – the sweet potato, carrot, and parsnip latke laced with garam masala and grated, fresh ginger, and dressed with harissa-spiked yogurt. It’s a perfect diversion from a regular latke, or in case you’re having a mid-week latke party, a stellar accompaniment to the traditional fare. I once went to a party where there were five different kinds of latkes and that’s pretty much all I ate. Really, it’s pretty much all I needed. 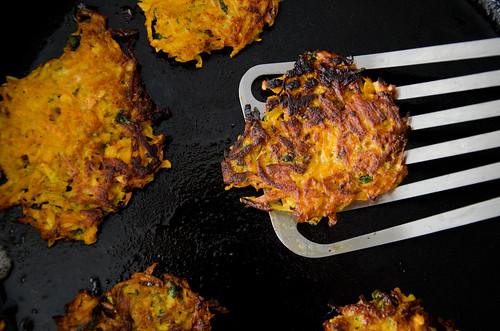 And as Seth Meyers pointed out on SNL last week, since it’s Hannukah, folks celebrating it are probably doing it wearing new socks, which suggests that I should be offering you at least that. I don’t have new socks for you and even if I did, giving new socks to everyone poses a logistical nightmare. Here are some delicious latkes instead – it’s got a full serving of vegetables and then some. I hope it makes up for my sock shortcomings. 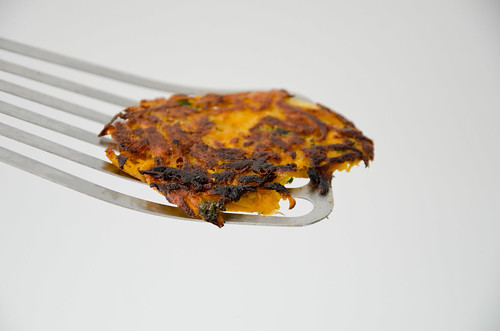 For the Harissa Yogurt:
1/4 cup plain Greek yogurt (2% works well too)
2 teaspoons fresh lemon juice, or to taste
2 teaspoons harissa, or to taste (I prefer mine spicy)
Pinch of fine sea salt, or to taste
Pomegranate arils, for garnish

Make the Harissa Yogurt:
1. In a small bowl, combine the yogurt, lemon juice, harissa, and salt until incorporated. Cover and refrigerate until needed.

Make the Latkes:
2. Heat a large heavy skillet over medium heat; my 12-inch cast iron skillet is ideal for latkes. Meanwhile, heat the oven to 250 degrees F. Line a sheet pan with parchment paper and place a cooling wire rack over it.

4. Add the oil to the pan when it is hot (you will feel its heat when you hover your hand above it). The oil should be able to cover the bottom of the pan in a viscous layer. Using a large soup spoon, lift a mound of the batter, allowing the excess liquid to drip down, and place it in a pan, distributing the shredded vegetables in a thin, even layer. You should have roughly a 2-1/2×2-1/2-inch latke. Repeat a few more times until the pan has enough latkes to fry; be careful not to overcrowd – my 12-inch skillet fits about 5 latkes max. Cook the latkes on one side until the edges begin to crisp up and turn a golden brown color, about 4 minutes. Using a fish spatula flip the latkes over and cook another 2 to 3 minutes. Transfer the cooked latkes to the cooling rack set over a baking sheet with parchment and transfer the whole thing to the oven. Repeat with the remaining batter until no more batter remains.

5. Right before serving, remove the harissa yogurt from the refrigerate and discard the cover. Sprinkle with the pomegranate seeds, and serve alongside latkes.