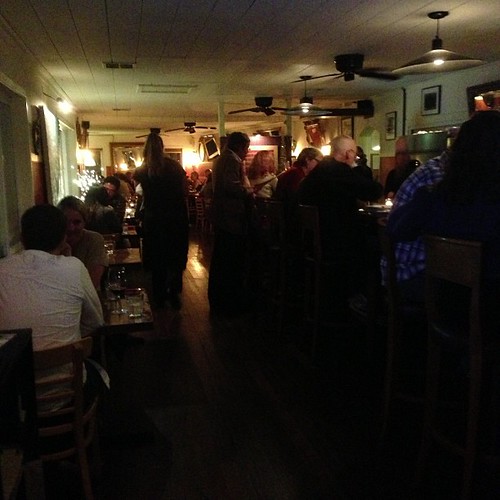 So, I know it’s Hannukah and I should have something Hannukah-themed here for you. Maybe tomorrow. Today, I’m missing San Francisco — a lot. Last week, Andrew had to attend the AGU conference, which is the biggest earth science conference in the world. Sixty thousand earth scientists came together to meet, discuss, debate, and geek out. And of course, I had to tag along.

I used the opportunity to see some dear friends, meet with some folks (including my Kimchi Cookbook editor – hi, Melissa!), and give my head some breathing room. After the last few weeks, I needed some time away from my desk, as well as my kitchen. I shot some rolls of film, which I hope to share with you soon. In the meantime, here are fragments of the trip, Instagram-style. 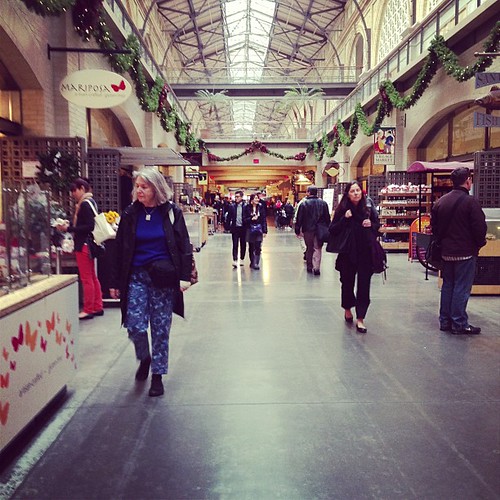 I had lunch with a middle school friend at the Slanted Door and couldn’t resist walking around the Ferry Building. 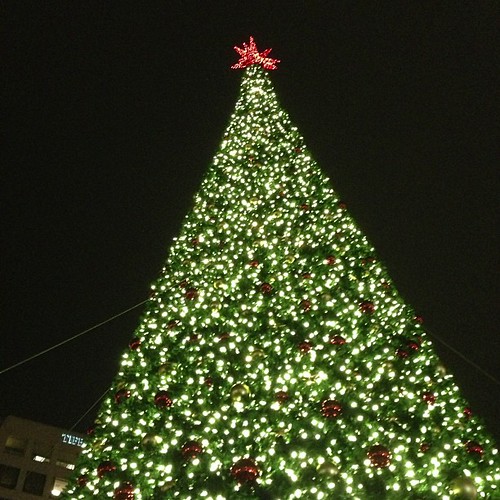 I met one of Andrew’s coworkers who was also attending the conference and we spent some time in Union Square gazing up at the magnificent Christmas tree. 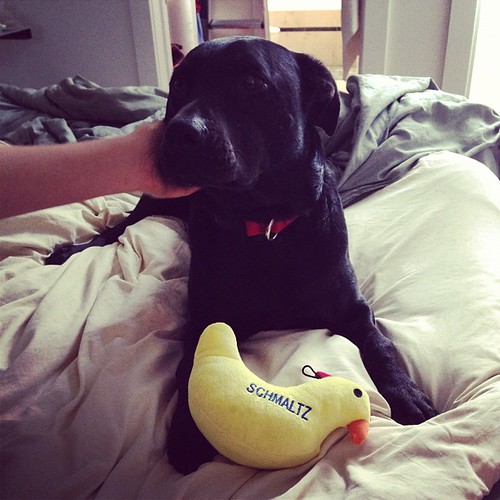 Because it’s Hannukah, my friend, Marianna’s, dog got a Hannukah gift: it squeaks! 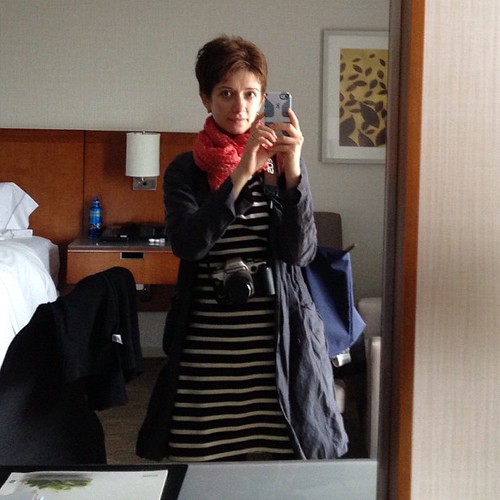 I wore a dress with stripes. In general, I wear a lot of stripes. As I’m writing this post now, what am I wearing? Stipes! 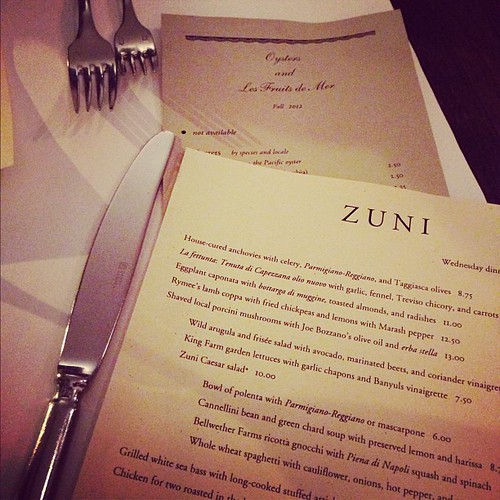 We went to Zuni Cafe. And got the chicken. And lo, it was good! But its thunder was totally stolen by a humble navy bean and Swiss chard soup. More on that soon, I promise. 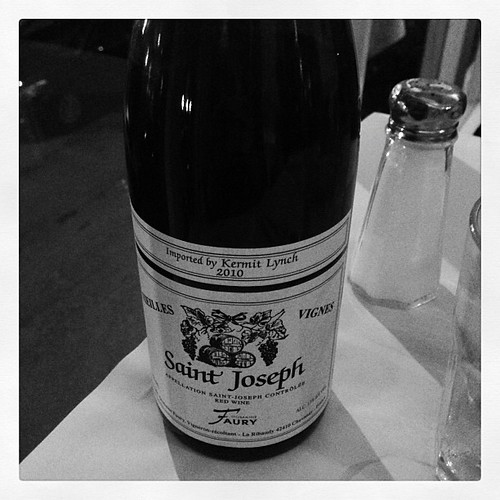 While at Zuni, we drank this – and it knocked my socks off. Delicious with a lot of earth and funk on the nose. Just how I like my wine. 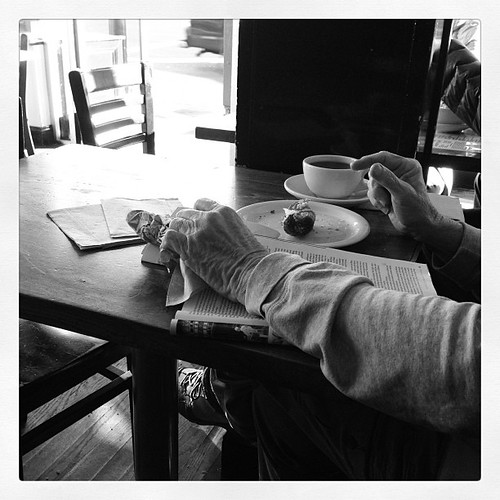 I had breakfast at Tartine. With Faith! And her sister! It was really a treat to be able to hang out on a whim. Her husband was also attending the AGU and she pretty much did the same thing I did — went along to visit SF. 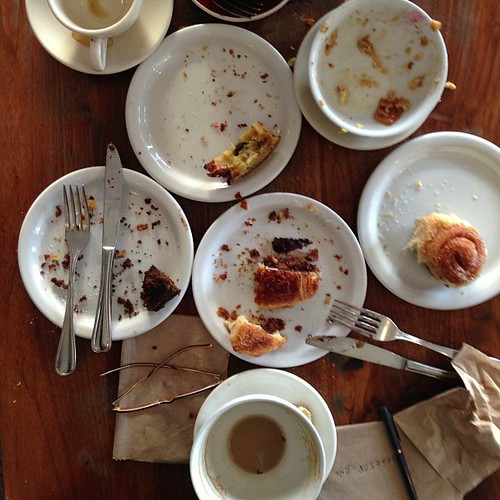 When you get three ladies who are committed to pastry and committed to breakfast, you order quite a spread. I could eat those morning buns every day, but I might have to switch to pants with an elastic waist. 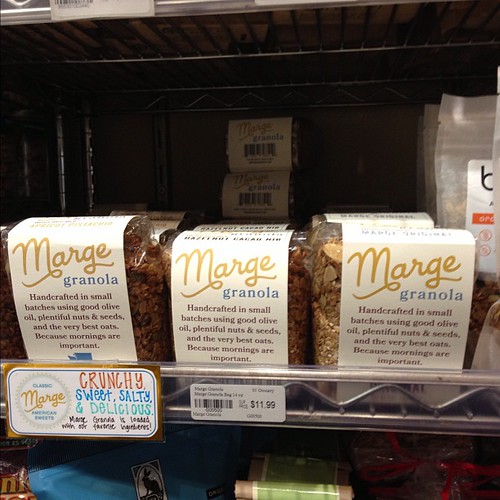 While waiting to have lunch with a new friend, I wandered around the neighborhood and walked right into BiRite Market, and saw a friend’s (delicious!) granola on their shelves. Yay, Megan! 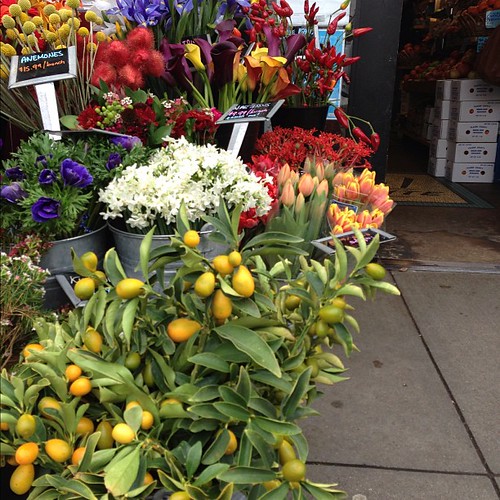 I wanted to buy some flowers, but I didn’t even have a vase at the hotel. So I took a picture instead. 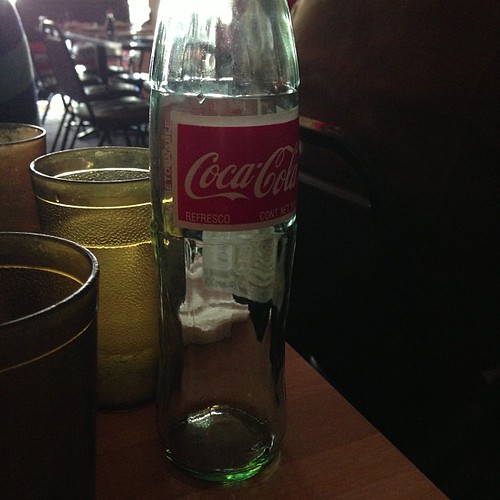 The lovely Amy Sherman gave me a great tour of the Mission district and then we went to Mission Chinese for lunch. Where we didn’t wait. And also, something happened to me that’s never happened to me before – I burned my tongue with the spices and it stayed that way for nearly a week. I eat a lot of very spicy food and this is the first time that has happened to me! I can still feel the burn. But it was delicious and well worth the price I paid. 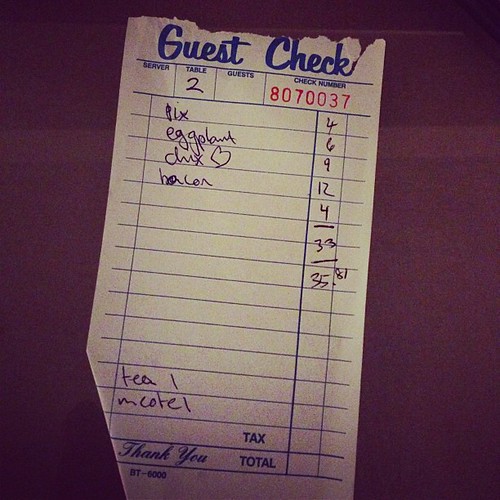 I just love that instead of writing “chicken hearts” our server drew an actual heart. So I kept the slip as a souvenir of sorts. 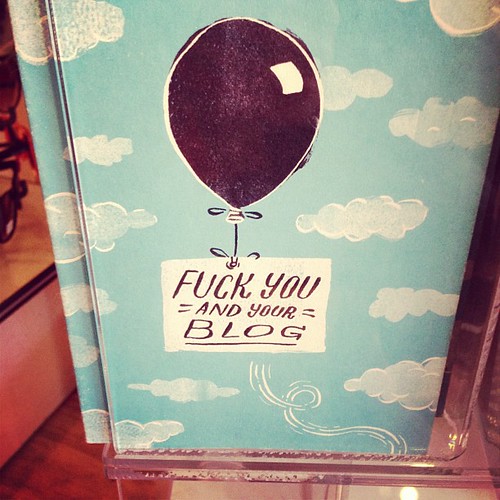 I regret not buying this notebook. It was brilliant and funny. Point taken. 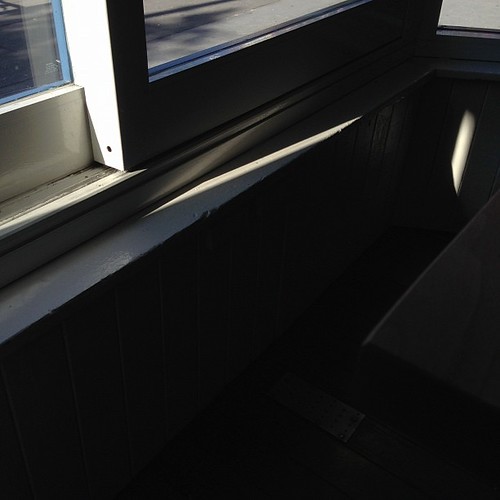 I met up with Maggie for lunch at Bar Tartine and while I was waiting for her, the light was just amazing. Incidentally, I sat at her favorite table – because of the light. Great minds. 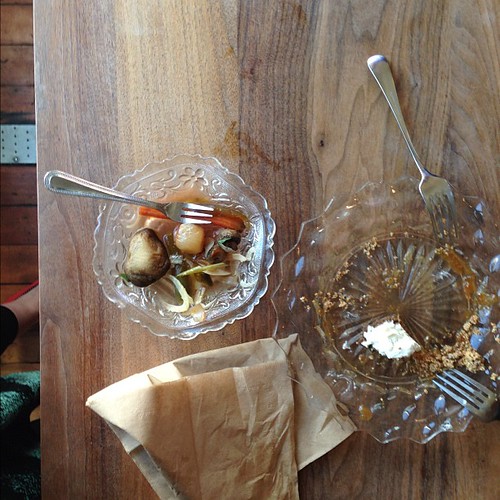 Everything we ate was just delicious. Especially the farmers cheese tart that I am dreaming of as I write this. 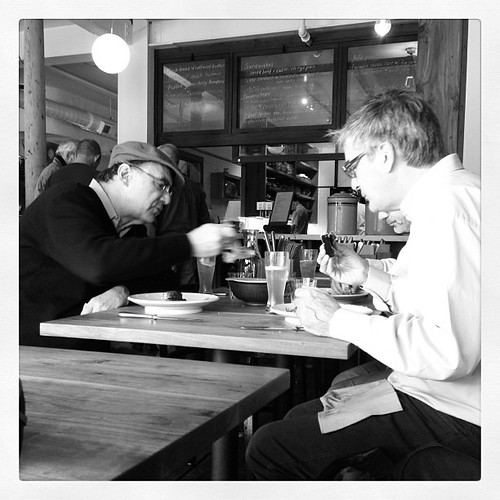 These gentlemen were in a serious debate about best movie of 2012. I think they settled on Argo. 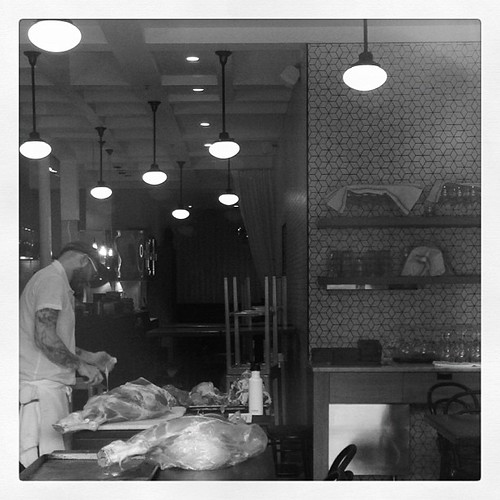 While walking around Mission, I saw this. And I almost walked into the restaurant and asked to shoot the process in earnest. I kind of regret not doing so. 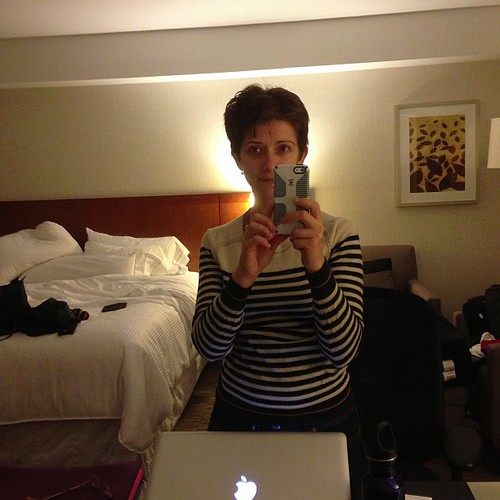 More stripes. Sigh. I have a problem. 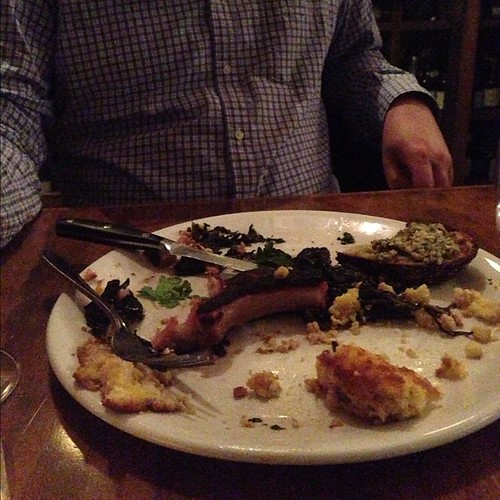 Our last night in San Francisco proper, we had dinner at St. Vincent, where we’ll most definitely go back upon our return. David Lynch’s wine-centric restaurant serves up some serious food, including a ham chop that made my husband eat his dinner quietly in the span of ten minutes. Which means he loved it. I had something called “laverbread” (a seaweed) mixed with steel cut oats and served on top of Tartine bread with a raw oyster and sauteed chanterelles. Mind. Blown. Also, Unti Grenache and a Wind Gap Syrah – incredible wines. And what made it even better is us meeting Mick Unti the following day while visiting his vineyard. More on that later. 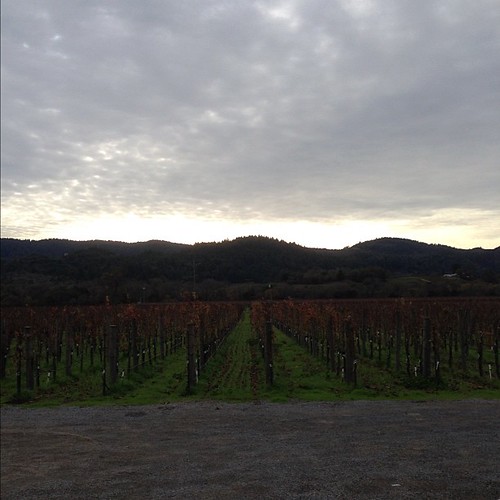 I’ll talk more about our daytrip to Sonoma in another post, but it was a truly spectacular day. While working on my second cookbook, I had a chance to interview Chef Duskie Estes for the book. She and her husband, John Stewart (a salumieri), run a spectacular restaurant out of Santa Rosa called Zazu. They also have a pig farm and make some of the best bacon I’ve ever had. When Chef Estes found out we were planning to eat at Zazu, she set up visits with wineries for us, complete with a pdf file of directions from one to the other. I can’t thank her enough. 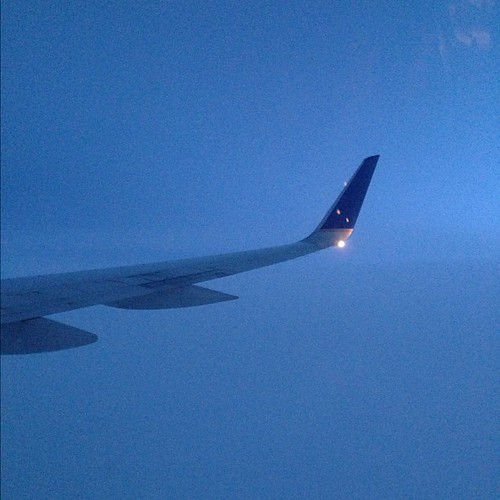 And then, in the blink of an eye, we were back in wet, chilly New York, missing San Francisco, and plotting our return back sooner rather than later. And hopefully next time we’re there, this lady and I can finally meet face to face. We’re long overdue.