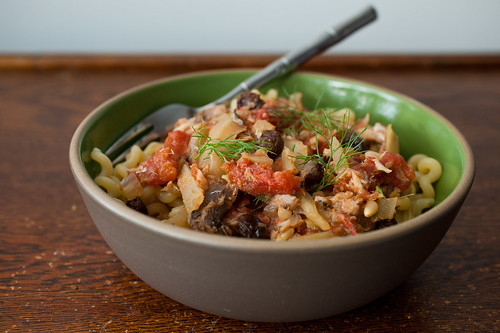 Last winter, while Andrew was away for work, his cousin Mike happened to be in town. Mike is an entrepreneur who lives in Boston, and if I had to catergorize the kind of person Mike is, well, he’s a bringer-of-people-together. Thus, Mike, being Mike, gathered a bunch of folks: cousins, significant others of cousins who couldn’t make it (that’s me!), and friends – for a brunch at Morandi. It turned into a swell afternoon.

Morandi, for those who don’t live in New York and might be contemplating a visit, is a great place for eating. Breakfast, lunch, dinner – they are all fantastic. But my favorite time to go there is for brunch. It’s boisterous, almost too-loud, but in a gregarious, fun-filled way, as if to remind you that hey, it’s the weekend, live a little. And so we ordered food: eggs, toast, pancakes, bloody mary’s and mimosas. There were at least two orders of Morandi’s famous ricotta fritters. When we got to the last fritter, everyone feigned a polite, No, you go ahead and take it, all the while hoping to be the lucky one on the end. While looking over the menu, out of the corner of my eye I spied pasta with sardines in tomato sauce with raisins, pine nuts, and fennel. I ordered it, and it’s been about a year now that I’ve been meaning to tell you about this dish. 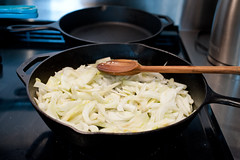 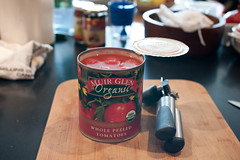 Nothing about the ingredients here, together, makes sense to me. I wouldn’t intuitively put fish and raisins in the same dish, but together fresh sardines, plump raisins, toasted pine nuts, and stewed, mellowed fennel, marry beautifully. What took me so long to make this at home? Poor planning, I guess. Fresh sardines, and I really think that fresh sardines is what make this dish superlative, are not exactly an ingredient you can get in advance and keep in the fridge for a few days. It’s something you want to purchase and make that very night.

When I finally sat down last month to start looking into this recipe in earnest, I looked through many different versions. Some recipes recommended using canned fish while others stressed the importance of fresh. To be fair in my rejection of canned sardines (which I love) for this recipe, I actually made a small version and tasted it. It was okay, but nothing to write home about. I think canned sardines make one hell of a snack atop a toast, but aren’t fit for pasta here.

The other thing is raisins. Andrew didn’t care for raisins in this dish, which is a shocker, because the inside joke here is that he will most certainly suggest an addition of golden raisins to just about anything. But not, apparently, pasta con le sarde. But since pasta con le sarde is a Sicilian dish, seeing raisins (or currants) and pine nuts in it actually makes sense. 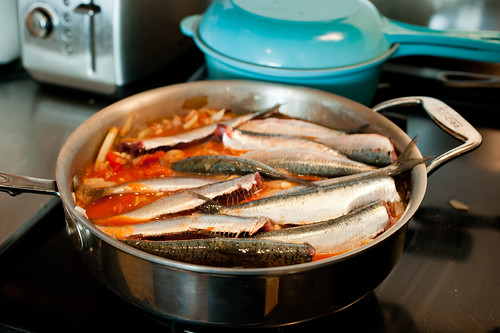 In the end, I sort of merged together two recipes: one by Mario Batali and another one that has recently been reprinted from Zakary Pelaccio’s book, Eat With Your Hands (co-authored by the awesome and wildly talented J. J. Goode). What I liked about the latter version was the use of tomato paste and fennel pollen, the latter being easily replaceable by ground fennel seeds, but since I had fennel pollen, I figured I might as well use it.*

What I got as a result was a rich and satisfying sauce that was pleasantly but not overwhelmingly (read: rudely) fishy. The dish, punctuated by delicate raisins and pine nuts, tasted, distinctly, of the sea. And after eating a bowl of it for lunch, I couldn’t wait for the evening to arrive so that Andrew and I could have it for dinner. Same meal twice in one day – I think that speaks for itself. 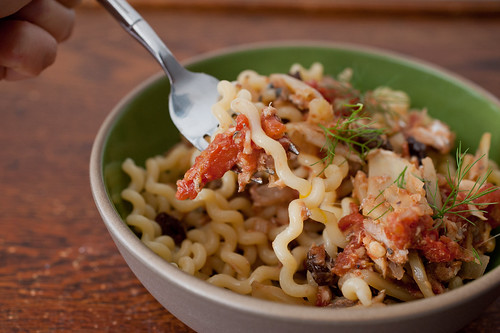 *(Because my awesome husband took me seriously when he was at the Brooklyn Larder last time, he wound up getting me two (!) small vials of it. Which was prohibitively expensive, but he was all, “I didn’t know: you said, “Fennel pollen.” By the way, his initial response to my fennel pollen text was “Beaver sweat?” but that’s a whole new tangent right there.)

** A Disclosure: I’ve been, on my own, a longtime fan of Muir Glen tomatoes. They are, by far, my favorite, and it’s pretty much all I use when I make pasta sauces. The kind folks from Muir Glen sent me an amazing care package including their very special “reserve” tomatoes which will be sold at Whole Foods shortly. Normally, I don’t do product reviews, but these reserve tomatoes are even better than the regular ones. Also, I’d be remiss if I didn’t thank them for introducing me to some other small batch products they included: California Olive Ranch Limited Reserve Olive Oil (made right at time of harvest aka olio nuovo); a gorgeous bag from Fleabags (a brand I’ve loved for awhile now); beautiful spoons from Jonathan’s Wild Cherry Spoon, and my now go-to apron from Raw Materials Design. These are truly small artisan brans – and I’m excited to be getting to know them and support them in the future.

This pasta dish isn’t for everyone, and I realize it might be low on the popularity totem pole. I absolutely love it and if you like seafood and sardines, this is a dish for you. If, on the other hand, the idea of putting seafood and pasta together makes your skin crawl, I’d skip it.

A quick general note on pasta weights. If you buy pasta that’s imported from Italy, chances are it’ll come in the 500 grams (half a kilo) package. So don’t be thrown off by that – half a kilo is close enough to 1 pound and it won’t make a difference. I know some of you will ask me if this is a dish that can be made with canned sardines. The answer is both: yes and no. Yes, of course, you can swap in a fish of your choice (you can even do a good oil packed tuna, if you like), but there’s going to be a difference in taste and fresh sardines will taste incomparably better. I did a mini test run with canned ones and it wasn’t bad, but it wasn’t nearly as delicious as the version I made using fresh fish. Lastly, there are those of you out there (you know who you are) who hate all things fennel, licorice, and anise. I used to be one of them, though I firmly remain in the camp that hates the last two. Firmly. However, in caramelizing and then stewing the fennel, it mellows out and becomes sweet and delicate. Even if you think raw fennel is gross, give it a try.

1. In a large skillet set over medium heat, add enough olive oil to generously cover the bottom of the pan and heat until the oil shimmers. Add the fennel and cook it, stirring, until caramelized, about 15 to 20 minutes. If the fennel is starting to burn a bit and not caramelize, reduce the heat to low and cook until sufficiently caramelized (i.e. about 3/4 of the mass).

3. In the skillet with the caramelized fennel, add the tomatoes (and their juice), onion, pine nuts, raisins, tomato paste, fennel pollen, and saffron. Season, to taste, with salt and pepper. Increase the heat to medium, and bring the sauce briefly to a boil; then then lower to a simmer. Add sardines and cook, stirring occasionally with a wooden spoon, until the sardines have broken into pieces and are thoroughly mixed into the sauce, about 10 to 15 minutes. Turn the heat off and let the sauce sit while you make the pasta (this allows the flavors to marry better, which means that the sauce will taste better).

4. Bring a large pot of water to a boil and salt generously until the water tastes like the ocean. Add the pasta and cook until tender but still al dente. Drain the cooked pasta into a large serving bowl, add 3/4 of the sauce, and toss to combine. Top with the remaining sauce. Garnish with reserved fennel fronds and serve.