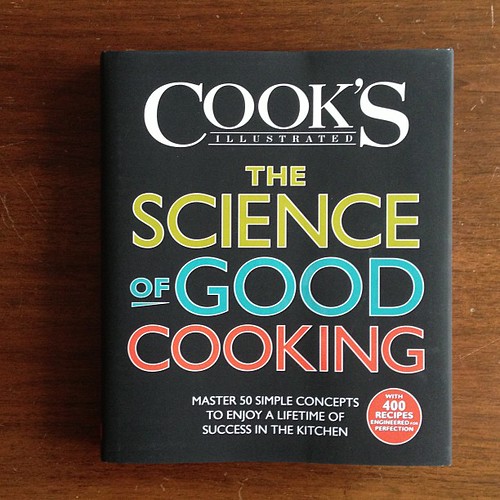 Hi, friends. Today we’re going to geek out a bit. Sometimes you come here and there are stories or ramblings, but today, think of today as a mini science class. We’re going to talk about amino acids and browning and alkaline dough. I bet you can’t wait to get started.

For awhile now, I’ve been wondering about leaveners and the difference between the two. Why would you ever use baking powder instead of baking soda, and, more importantly, why would you ever use both? I’ve asked many folks this question, and gotten somewhat satisfying answers, but nothing that really made sense. I needed to delved deeper; I needed a super-geeky answer.

Enter a book to do just that, answer all my science-driven kitchen questions – Cooks’ Illustrated The Science of Good Cooking. Just the mere word “science” made me excited. The book was on my shortlist of cookbooks to purchase, but the generous (and lovely) folks over at America’s Test Kitchen, some of whom I met at the Cookbook Conference a few weeks ago, sent me a copy. And the first chapter to catch my eye, Concept 42, was appropriately titled “Two Leaveners Are Often Better than One”.

After reading through the book and thoroughly geeking out, I thought that you, readers, might benefit from a book like this on your shelves. Everyone, I think, could benefit from this book on their shelves. So I asked if they’d be willing to partner up on a giveaway, and much to my delight, they said yes!

But before we talk giveaway rules, let’s talk leaveners! Here’s how this works: Quickbreads, cakes, muffins, and biscuits (as well as some cookies) need a leavener to rise. This leavener comes in the form of baking soda and/or baking powder. And here’s where we get geeky.

Baking soda is alkaline (meaning on the acidity scale, it’s the opposite) and relies on acid on the recipe. The acid is often provided by buttermilk, sour cream, yogurt, molasses, honey (which happens to be a “volatile” aka acidic ingredient), beer, etc. When baking soda meets an acid, it instantly starts to produce carbon dioxide (CO2), which forms bubbles in the batter/dough. Use too little, and the batter doesn’t risel use too much – and you end up with bubbles that are too large, which might cause your baked good to collapse, and you’re back at a sunken, flat result. And the added disadvantage of too much baking soda is that metallic taste that lingers on your palate. Not good for anyone.

Baking powder, however, is a blend of baking soda, an acid (usually cream of tartar), and double-dried cornstarch. You can use a 2:1:1 ratio and make your own if you’re ever in a pinch and have run out of supermarket baking powder. The cornstarch is a drying agent and keeps the baking soda (alkaline) from cream of tartar (acid) from getting together and forming a reaction. Usually, all that baking powder needs to start doing its thing, is a liquid, any liquid, really. Baking powder is useful when there is no natural acidity in the batter. 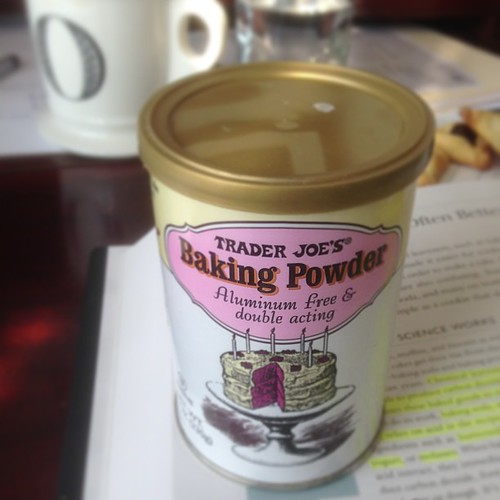 So, now the real questions arises: Why use both in a recipe? Here’s what the book has to say: The combination of the two leaveners, gives you better control over how fast fast is release as well as the alkalinity of the dough. Some recipes have so much acid, that bakind soda is added to ensure that the baking powder isn’t neutralized and thus deactivated by all the acid. And since baking soda needs acid from other ingredients, it tends to result in more alkaline doughs than those made with only baking powder.

Now, here’s where it gets super geeky (as if that above wasn’t geeky enough) – you still with me? Awake? Okay, here we go. So if we add baking soda to our dough, the dough is then more alkaline. More alkaline doughs brown faster and have weaker gluten which results in a more tender, porous crumb. But why does alkaline doughs brown better? Well, that has to do with amino acids which are found in proteins of flour. Amino acid molecule has an amino end and an acid end. As you probably suspect the acid end is acidic; but do you also suspect that the amino end is alkaline? No? Well, it is. And it’s the alkaline end that reacts with sugar molecules and produces that sexy thing we call the Maillard reaction. Whereas acidic environments deactivate the alkaline ends are deactivated, in an alkaline one, facilitated by baking soda, the amin ends do rather well and will thus react with sugar and create browning, which in turn, will give you better flavor.

Still with me? Well, that’s the end of today’s lesson, and now, with The Science of Good Cooking (where my friend Molly Birnbaum was project editor – and did one hell of a job), I can, if ever asked at a cocktail party, explain not just the difference, but why use both and what happens, chemically, when these leaveners are added to doughs and batters. Oh, and lastly, David Lebovitz had an excellent tip on how to tell if your baking powder (which goes bad) is still good. Drop a spoon into a pot of boiling water, and if the water boils more vigorously, the baking powder is still good. If not – chuck it, and get a new container, or make your own, depending on what you’re baking.

GIVEAWAY RULES:
Leave a comment with the following: What is the your favorite cooking tip, trick, or technique? When leaving a comment, be sure to leave your email address, so I can contact you in case you win. Comments up until 11:59pm on March 3, will be considered for the giveaway. I’ll pick the winner at random, and get in touch with him or her about the prize, which America’s Test Kitchen will ship to the winner. Good luck to you all, and I’m very curious about your favorite tips/tricks/techniques.