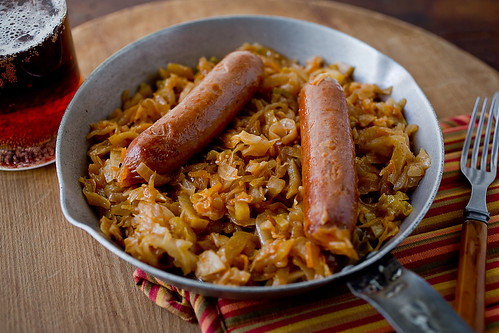 This, above, might not look like much: bratwurst with cabbage looks humble enough, but let me tell you – it’s something, all right. On a cold February night accompanied by freezing rain, I can’t think of more satisfying dinner. Also, feel free to file this under “Crap, it’s [fill in the day of the week] night, the fridge is empty, and there’s no dinner plan” kind of a meal. Happens in this household more often than I like to admit. And also a random but important aside (and please tell me if I’m alone in this): on the worst kind of nights, the kind where there’s bitter winds and cold rain or sleet, I am loathe to call for take-out because (and follow me here a moment) I feel badly about sending the delivery guys out in this weather delivering my food. I worry that they might get sick and there’s no health insurance; I fret over the fact that people’s driving is more erratic when there is bad weather and the delivery guys might get into an accident. I know my logic is flawed (by not ordering I am costing them income), and when we do order in on such nights, we tip extra for the delivery guys’ effort, but still, the pang of guilt in making them go out into the elements – I feel it every time.

Bratwurst served with sauerkraut is, I’m told, a very common thing in Germany. It’s hearty, hardy fare, downright pedestrian if you think about it; honest cooking without much cooing or pretense. It’s meant to warm you right down to your bones and fill your belly, and goes down beautifully with a pint of beer. Right about now I might crave Florida sunshine, a pool, and an umbrella drink, but for this, friends, you need the all the misery of the Northeast February (or anywhere where it’s cold) with all its inglorious freeze to fully appreciate what visually doesn’t, in the least bit, look arresting. 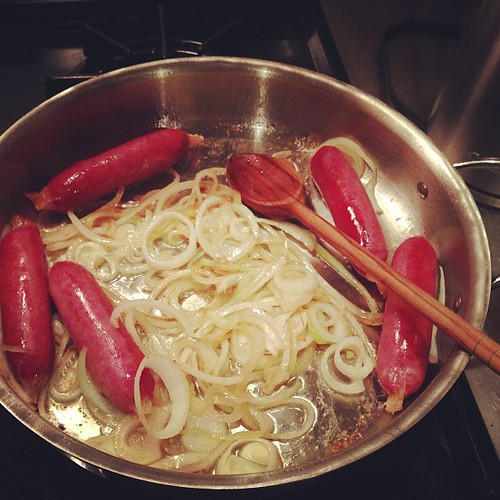 In Russia, I remember eating similar sausages but instead of stewed sauerkraut, we made it with stewed fresh cabbage. The cabbage would start off crispy and firm, and would eventually mellow out and sink under its own weight into a soft, delicate pile of amber-colored, comforting mush. When my mother was in a pinch, and when I refused anything else, brats and cabbage were her reliable allies. I was guaranteed to clean up my plate.

Ironically, just as common as this meal was to me growing up, it was as alien to Andrew, who grew up in a kosher home. Bratwurst, being made of pork, certainly never made an appearance in his kitchen. And while this hearkens me back to my childhood in Russia, to him, brats and sauerkraut are novelty, something to be curious and apprehensive about at the same time. Bratwurst, as he noted to me, while tearing into his plate, doesn’t even sound delicious. Oh, to judge a sausage by its name! 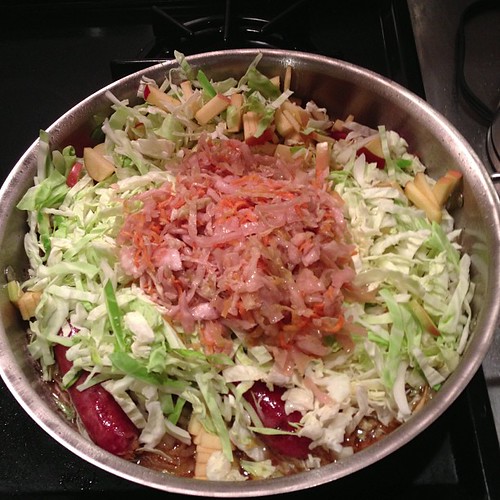 The night I made this, I decided to borrow on both traditions: the German and the Russian, by mixing part cabbage with part homemade sauerkraut I made a few months ago. The old sauerkraut batch is now deeply fermented which makes it perfect for soups, stews, and dishes such as this. I wanted a slightly sour taste, but I didn’t want the kraut to overtake the dish and compete with bratwurst. And at the last minute, feeling emboldened, I threw in a chopped apple – a decision I don’t regret one bit.

And you know what? Andrew ate his portion in one fell swoop (and had seconds!); while the man who shot the top picture above had it for lunch two days later (I shared). As for me – my plate was empty so fast, I hardly remember eating. Which is both wonderful and sad – and could only mean that it’ll be brats and cabbage night here soon again, quite possibly during another nasty February night. I can’t believe I’m even saying this: too bad it’s such a short month.

Bratwurst with Cabbage, Sauerkraut, and Apple

That we probably had the tastiest brats around is all because of a lovely lady named Heidi Normand with whom I’ve become friends since working on the second book. Heidi (who sent me a care package with the aforementioned brats) works for a farm that raises Mangalitsa pigs, Mosefund Mangalitsa. To taste Mangalitsa meat is to have your world transformed – I’ve never before tasted pork such as this. Mangalitsa pigs, historically, are a cross between a lard pig and a wild boar, which means their meat is both fatty and immensely flavorful. And since these animals are raised in humane conditions and are cared for, the meat is of the best quality. If you can’t find bratwurst where you live, kielbasa will do in a pinch.

In a large pan, heat oil over high heat until shimmering. Add bratwurst to the pan and cook, turning until browned. Reduce heat to medium, and add the onions. Cook onions until lightly caramelized. Add stock, paprika, mustard seeds, cabbage, and sauerkraut, reduce heat to medium-low, and simmer, uncovered for 45 minutes. Remove from heat and serve with baguette (if using).