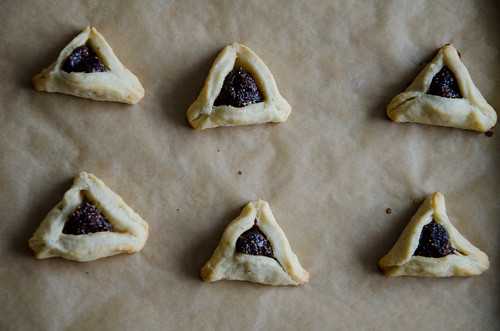 I wanted to title this post “Here are the [email protected]#$%^ hamantaschen – Happy Purim!” but that seemed kind of rude, and not really my style. So instead, I’m going to apologize for giving these to you in the eleventh hour. I have a good excuse: I seem to have caught Andrew’s horrible cold and I’ve been feeling lackluster for the last few days. Not so terrible that I’m spending my day in bed, but terrible enough that I am constantly dreaming of a nap, which never happens to me under normal circumstances.

Fully intending to test these hamantaschen on Thursday, I was derailed when I woke up feeling off. At first I thought it was a matter of having coffee and letting caffeine return me to human form, but when the funny feeling didn’t go away, and in fact proceeded to grow, I figured that maybe I was coming down with something. I still decided to make the filling, which consisted mainly of just monitoring the simmering figs and making sure the pan didn’t go dry. I felt like I could handle it – and it went okay. The filling turned out great and in the fridge it went.

That was the end of my culinary effort for the day. Earlier in the morning, I had the foresight to pick up a rotisserie chicken, some sweet potatoes and red onions. So all I had to do was make one side dish (that requires minimal effort) and dinner was ready. I wish I had the foresight to do these things more often. 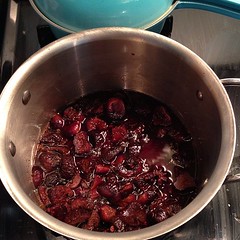 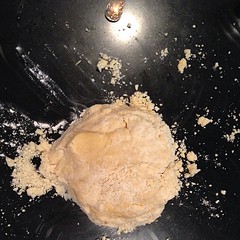 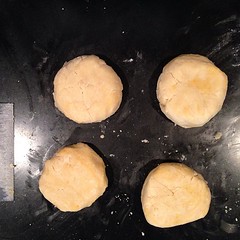 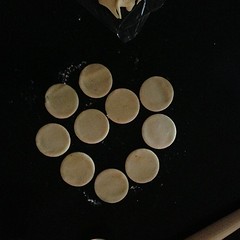 The following day, which was Friday, which was also yesterday, I spent the day working at Melissa Clark’s, which is always a treat. I figured I’d make the hamantaschen in the evening, so I wanted to make the dough before leaving home in the morning.

I measured out my ingredients and quickly pulled whipped a batch of the dough. I had just enough time to put it in the refrigerator and clean up after myself — there was flour everywhere and I’m absolutely neurotic about leaving a clean kitchen. Nothing puts me in a more dismayed mood than coming home to a dirty kitchen with unwashed dishes from cooking, especially after baking. Everything was washed, dried, and put away; the counters and floors were scrubbed clean, and off I went.

I came home at night in a fog and cooking was off the table. Andrew ate a salami sandwich from the Brooklyn Larder with a newly imported porter I picked up there as well. I ate some of our leftover root vegetable soup and a crostini with ricotta and prosciutto. So we were hardly slumming it. Even with minimal time in the kitchen. 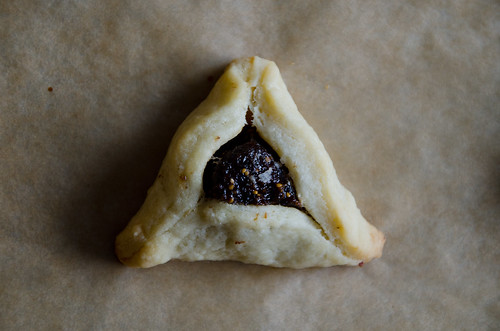 This morning, being Saturday, I woke up early to finish what I now call, the three-day-hamantaschen endeavor. Can you believe it? This shouldn’t take three days, but with me being sick and kind of pressed for time – it turned into a multi-day affair.

Which is to say that if you’re the type of person who leaves home early in the morning and comes home late at night, this hamantaschen schedule makes it quite manageable and almost too easy. You just make the parts while you’re doing other things (or in between things for that matter) and then before you know it, all your hamantaschen parts are ready to be put together, which doesn’t take that much time.

And while this anecdote has nothing to do wit hamantaschen, I feel the need to share this with you because I think it’s very funny. My father, who reads my blog regularly, will probably not find it very funny, but I really hope that he does. Dad, I love you, this made me laugh until I cried, so here goes. 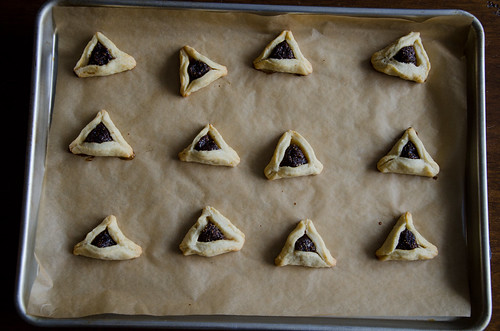 Yesterday, aka the day of the dough-making, was also the day of our US-arrival anniversary. It’s been twenty-four years since our arrival and I like to say that neither the US nor my family has since been the same. I still have an old polaroid that was taken of us in the first days in the US and we looked like, well, super-Russian and a little feral. Like a dutiful child, I dispatched the following email to my parents:

Approximately around 8:30pm I received a response from my father. To loosely translate it from Russian, “And nothing worth recounting…”

If you know nothing else about my father, this should pretty much sum it up. If Eeyore were ever human, my father embodies him precisely. To an optimist, a glass is half full; to a pessimist – half empty. To my father – what is that glass even doing there? 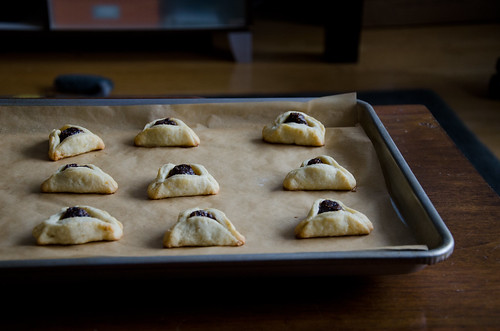 And now would probably be the time to tell you that this really is a fig newton in hamantaschen’s clothing. I got the inspiration from Hedy Goldsmith who published a recipe for adult fig newtons in Food & Wine a few months ago. The filling was stewed in wine and anise with some lemon zest and the whole thing sounded kind of perfect. And then I thought, why not make it into a hamantaschen?

I used Melissa Clark’s hamantaschen dough with mascarpone, which is absolutely delicious and comes together in a pinch (think morning before work kind of a pinch) and modified the filling to suit my palate. Instead of wine, I used pomegranate juice because I wanted more fruit on the palate; instead of lemon zest, I used clementines; and given my dislike of regular anise, but strange like of star anise (in small quantities!), I used the latter in place of the former.

I was tempted to also make hamantaschen with lekvar (that amazing prune butter, also very traditional and delicious), but given my current state, one type of hamantaschen seemed like a good accomplishment in and of itself. But I’d like to pause here and just let you think on this for a minute: what you have before you is hamantaschen, indeed, but also it’s a fig newton for adults. You have my permission to make it and not share with your kids – after all, you share everything else. If you decide to leave these just for yourself, I won’t think harshly of you.

Make the Filling:
1. In a saucepan, combine the figs, juice, sugar, zest, star anise, and 1 cup of water and bring to a boil. Simmer over low heat until the figs are softened and the liquid is syrupy and is reduced to about 1/2 cup. Let the figs cool in their syrup, then puree in a food processor until smooth. [If you dislike the taste of star anise, you should remove it before pureeing, but if you do, leave it in.]

Make the Dough:
2. In a food processor fitted with a blade, pulse together the flour, sugar, salt, and butter until it forms a coarse meal. Add the mascarpone and pulse to combine. In a small bowl, stir together the yolks, vanilla, and the zest. Add the yolk mixture to the dough and pulse until the dough barely comes together – it should look pretty scraggly.

3. Dump the dough onto a work surface and gently knead into a ball. Divide the ball into even quarters, flatten each quarter into a disk, and wrap each disk tightly in plastic wrap. Refrigerate the dough for at least 1 hour and up to 3 days.

Make the Hamantaschen:
4. Position the rack in the middle and heat the oven to 350 degrees F. Roll out a disc of the dough to about 1/8-inch thickness. Using a 2 1/2-inch biscuit cutter, cut out the dough. Brush each circle with a thin coat of milk. Chill the scraps, if planning to re-roll as the dough gets soft.

5. Place a generous 1/2 teaspoon of the filling at the center of each of the circles, and press up the sides to form triangles, pinching to seal. Brush the tops with more milk. Chill the formed hamantaschen for 10 minutes. I advise against folding this dough as it has a tendency to come undone a bit – which won’t make your hamantaschen leak or anything, but in case you want them to be perfect triangles, pinch away and pinch well!

6. Bake on parchment-lined sheets for about 15 to 20 minutes until golden. If baking on several trays, switch them at the halfway point.

Makes 48 hamantaschen if reusing scraps; 36 if not.