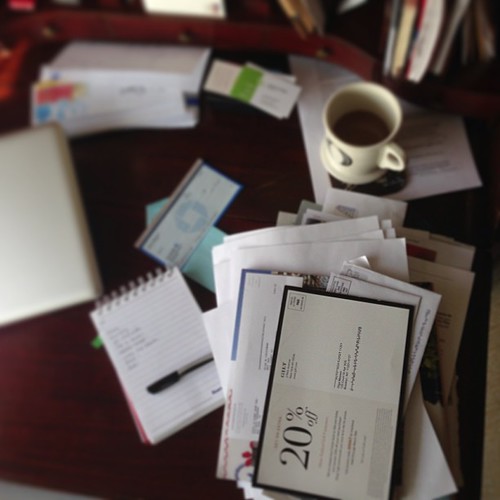 See above? That was the state of my desk Wednesday morning. By Thursday morning, my attempts to declutter have been semi-effective. See the after picture. I hope that you all have had a good Valentine’s Day. I don’t put much emphasis on the holiday and neither does Andrew – this system works beautifully for the both of us. And we pretty much forgot what day it was yesterday (we were traveling) until, at lunch, we realized all the couples around us with flowers and chocolates, and burst out laughing because, for a few seconds, neither one of us had a clue. Anyway, I hope everyone’s day was filled with love: romantic, platonic, pet’s, self-indulgent – whatever the kind, I hope it made you happy!

This week marks 50 years since Sylvia Plath’s death (the Bell Jar made an indelible impression on me as a teen), but when a writer went looking for her obituaries, there were none to be found. Here’s why. Sad and a reflection of that time.

The man who shot Bin Laden. Heartbreaking and disturbing on how the US cares for its vets.

A (lazy) parent’s confession. I kind of just love it.

Last week, I spent one day trailing in the ABC Kitchen. I’ll speak more to that experience some other time (in short: it was awesome!). Here is some great advice from respected chefs on how to make it as a chef.

I heart Spencer Ackerman and Danger Room – this is his crowning achievement: Battle of Hoth!

Unpaid internships are not just a rich girl problem – they’re a problem, period. I’ve said this before and I’ve said it again, people really should be compensated for their work – no one, ever, should be expected to work for free.

I’ll be the first one to say it: when it’s time for pizza, I order a Diet Coke. It’s just that pizza tastes best to me with a cola. And it’s not that I’m so into counting calories, but more that I am very anti high-fructose corn syrup. However, I may have to give that habit up too. Diet drinks are associated with an increased risk of Type II diabetes – yikes!

Apparently, to those not with their head in the sand, NYC just had fashion week! Here are, Momofuku’s pastry chef, Christina Tosi, and model, Karlie Kloss (whose haircut has been apparently dubbed as the haircut of 2013!), work out (in style too, I might add!) and make cookies. The cutest thing I’ve seen all week!

Hope your week was wonderful, happy Friday, and a wonderful weekend!! xo