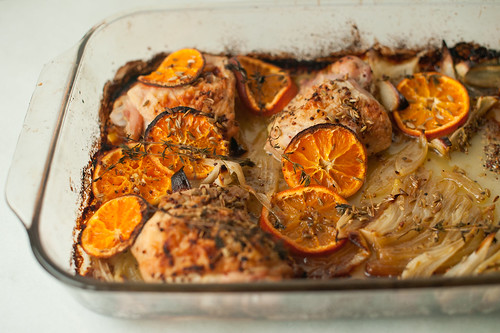 I don’t care what anyone says, but on my bookshelf, Jerusalem has found a permanent spot as a go-to book. With all due respect to Marco Canora, I think some of his criticism (while judging this year’s Piglet contest) of the book was a little, well, I’m not sure what to call it, but I was genuinely surprised by some of his criticism. But then again, some of the criticism of the books being judged struck me as odd. Adam Roberts makes a good point when he says, some people’s garbage is other people’s treasure. Also, I’m pretty sure you can get sumac at Kalustyan’s and it’s so worth having in your spice pantry.

I get it – some of the recipes, should be more specific, and in that, the critique holds valid. Yes, it’s better to say how much salt and pepper in the ingredients if you do give a measure for it later in instructions. I’m not going to challenge that. What I am going to challenge, perhaps, is that the food, in and of itself, is gorgeous, celebratory, lush, full of joy and love, and Canora makes no mention of it. And while the recipes might have used a slightly more thorough edit, the food, in and of itself, is what truly makes this book a treasure.

I approach writing about food on this blog simply: If I see a good recipe, whether it’s something I’ve tested on my own in the kitchen, or cooked from a book, I’m going to share it with you because I feel that the only recipes worth sharing and writing about are the ones you want to shout about from tops of mountains, or in the case of living in New York – buildings. And Roasted Chicken Thighs with Clementines is one such recipe. 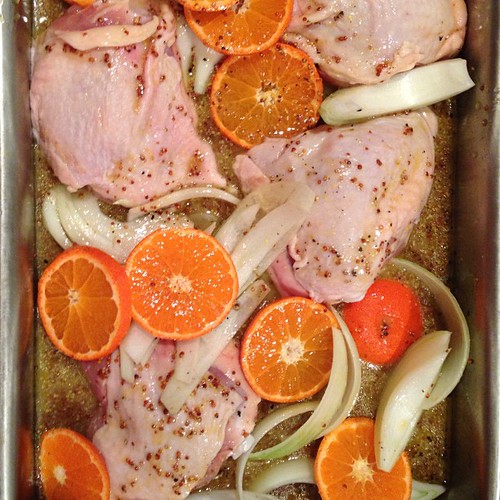 By the way, I should probably mention that I’m going through a serious cookbook phase in that I’m cooking a lot more from them than I have been in the last twelve months. So you should probably expect more recipes here that are adapted from or inspired by the cookbooks I’m reading. Some of them will be current and “hot” and others might be books you’ve never heard about. There’s a time and place for everything and for the time being I’m feeling like I want to learn from others. I’ve plenty of ideas of my own, but I’m not in the mood to write about them at the moment. And the best part of writing a blog is having the absolute final word in what goes up on the proverbial page, right? Right.

I’ve come into some stellar cookbooks as of late. Some I found used for pennies (and when I say pennies, I mean – pennies); others were sent to me by thoughtful relatives; others mailed by publishers (though I don’t seem to get that many of those). And I intend to get immersed in them – and share my favorites with you along the way.

The original name of this recipe is Roasted Chicken With Clementines and Arak. When I first read the title, I had to go and look up what arak was. Arak is a very strong clear spirit that’s flavored with anise. The word means “sweat” in Arabic, and the spirit is usually mixed with water: one part arak to two parts water. Since arak can be a little bit tricky to find here, the authors, helpfully, suggest you swap in pernod or ouzo. But what if you happen to be an anise hater? What if the mere hint of anise will make you push the entire dish away from you? That person, as you might suspect, happens to be me.

But the recipe (in every other way) looked so absolutely amazing, that I had to give it a go. Normally, with Ottolenghi’s recipes, I change very little because I love his palate and flavors. But no matter how much I love his food, anise is something I really dislike. And so instead of arak, I just added more fresh orange juice and hoped for a miracle, which is exactly what I got, when the chicken, browned and crisp, emerged from the oven. Some of the clementines had caramelized and their edges turned blackish, but their smell, mellow and sweet, faintly burnt, mixing with thyme and pepper, turned ambrosial. And I don’t use that word, ambrosial, lightly. The smell is intoxicating. 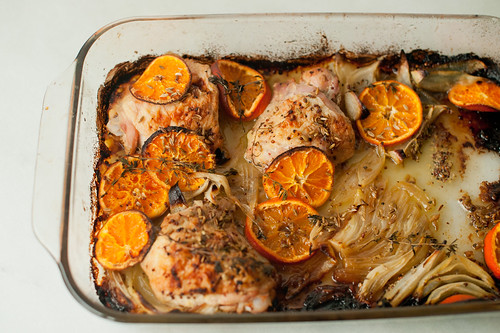 Ottolenghi then has you remove the chicken from its cooking vessel and makes you pour the sauce into a separate saucepan (“On a weeknight? Seriously?” I thought) and cook the sauce down to the consistency of syrup. This all seems like kind of over the top (because who wants to get an extra pot dirty? Not I!) and a bit crazy given that you’re just trying to get dinner on the table, but you need to trust this man and you need to trust his instruction. The sauce is truly that much better after you reduce it. Any residual sharpness is gone and in its place remains a pleasant, undisruptive acidity. And aisde from that extra pot to wash, the additional step is another few minutes of your time, which if you trust me by now – is so, totally, worth it.

And with this, I, still in my jammies and bathrobe, instead of climbing to the top of my building and shouting about this dish, will now take a shower and put on something civilized. I’m sure you’ll understand.

More Ottolenghi Here: I cooked a few things from the book already, but blogged only one other: roasted butternut squash and red onion with tahini and za’atar. Needless to say, it’s become one of our favorites.

Roasted Chicken Thighs With Clementines
Adapted from Jerusalem, by Ottolenghi and Tamimi

A few quick notes, which I highly recommend you read: First, there’s no need to marinade overnight, but if you’re the sort of intrepid cook who really plans ahead (kudos to you) the dish will definitely benefit from it. Secondly, I gave both the arak and the non-arak versions of the dish. In my opinion, with deep respect to Chef Ottolenghi, I find arak (and its cousins) to be displeasing to the palate. Thirdly, there are some of you out there, and I was once one of you, who greatly dislike fennel. In making this, I was once out of fennel and made this with the equivalent amount of onions. I like both versions equally, but for the fennel-haters, the onions will work much better, while for the onion-haters (they exist), the fennel options will sound far more appealing. [metric measurements coming shortly!]

2. Trim the fennel and halve each bulb lengthwise. Quarter each half so you have wedges and add fennel to the liquid along with the chicken pieces, clementine, thyme, and fennel seeds. Give everything a nice stir, so that the chicken is well-coated in the marinade, cover with plastic wrap, and refrigerate for a few hours or overnight. If you didn’t plan ahead and don’t have a few hours (or overnight) making this on the go works out beautifully.

3. Position the baking rack in the middle and heat the oven to 475 degrees F (220 degrees C). Divide the chicken and all the marinade and its components across 2 (9x13x2-inch) roasting pans, so that there is enough room to accommodate everything comfortably in a single layer. Make sure the chicken skin is facing up. Roast for about 35 minutes or until the chicken is nicely browned and cooked through. The edges of some of the clementines will start to look burnt. Check on the chicken about 25 minutes into the roasting process and if you think that the liquid is beginning to dry up add 1/4 cup more water (or use your judgment). When the chicken is done, remove from the oven, and transfer the chicken, fennel, and clementines to a platter, cover, and keep warm.

4. Pour the cooking liquid into a small saucepan, place over medium-high heat, and bring to a boil. Simmer the sauce until it is reduced by one-third and is the consistency of syrup, about 7 minutes. You should be left with about 1/3 cup. If, by the time your pour the sauce, there’s already less than 1/3 cup, add a splash or orange juice to the saucepan, along with the caramelized crispy pan drippings, and bring to a simmer, reducing as instructed above. You want a thick, syrupy consistency. Pour the sauce over the chicken, fennel, and clementines, garnish with parsley, and serve.