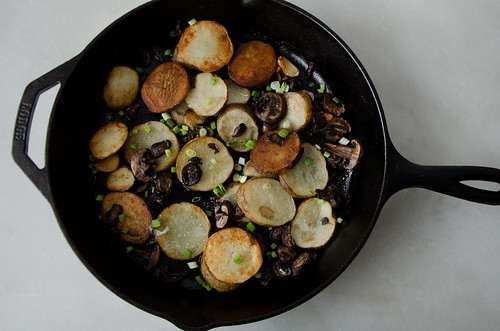 This here makes a perfectly respectable lunch despite what you might think. You can try and reason as to why you shouldn’t have potatoes bathed in duck fat, but all of your thinking will fall short of one germane truth against which you will have no argument: they are delicious. These are humble ingredients, potatoes, mushrooms. The whole thing will run you about six dollars, excluding the duck fat. How’s that for economy eating?

You can purchase duck fat a nicer stores or your butcher, or if you cook duck, and you should, you should absolutely save the fat that renders out. Not doing so results in a great culinary tragedy. I actually like cooking duck precisely for the duck fat, because, to me, it’s the best part of the duck. 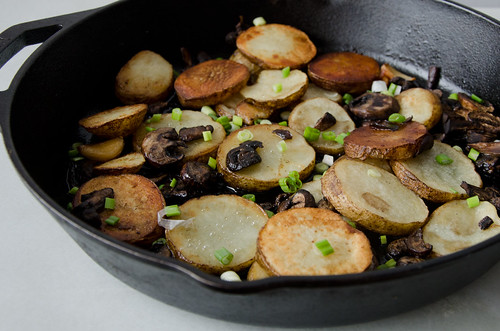 And I happen to love duck, probably not as much as my husband loves duck, but then again, I don’t know anyone who likes loves duck as much as my husband. If you ever get your hands on a goose, save the fat as well. Goose fat is even more glorious, and it is goose fat, that these potatoes should ideally be cooked in. But finding goose in the US is harder than you might think. In England, however, goose is plentiful and far more popular than it is here. One of my most enduring childhood memories is my mother’s roast goose for my fifth birthday for which she gathered our large extended family. I remember the crackly, salty skin. I also remember all the fat that my mother saved from it and used it for cooking. Let me tell you: the goose is one fat bird.

I had plans to make these potatoes last weekend. I even told you I would, but I sort of took a sabbatical from the kitchen.

In general I’ve been taking a little break from new recipes. I think where my head is at currently makes me crave those trusted all-stars we seem to cook over and over. The Tuscan kale and pecorino salad, the roasted squash and onion (though lately I’ve been making it with sweet potato and it’s even better!), the midnight pasta, the roasted chicken. There’s something in repetition that gives me comfort. It grounds me in ways that’s hard to put into words. And for now, it’s what I need. 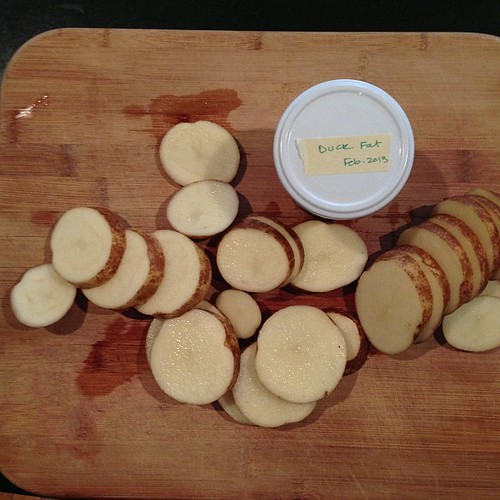 Another thing that happened last weekend is what I call “fiscal wanton”. You see, right as I complain of rent we can’t afford, last Saturday night Andrew and I went and treated ourselves to oysters and beer (and duck, see what I mean about his duck addiction) at Marlow & Sons, which by the way is fantastic. Look, it’s not like we spent every penny we had, but it was a nice’ish dinner that we badly needed psychologically. I’m wondering if there’s something called briny-east-coast-oyster-induced smiling because if it’s a thing, then we definitely had it.

Sunday night we had dinner at our friends’ house and they made lamb. It’s always lovely when someone offers to cook for you, and it was wonderful to sit in such great company, eating and drinking and talking. But it meant, again, I got to be away from the kitchen.

Sometimes, I find that being away makes me come back with a renewed sense of determination and inspiration. Sometimes, I just miss the chopping and the stirring. But these days, what truly lifts my heart and spirit are those simple homey dishes that while lacking a new spin on an old classic, are just true, been-there-done-that gems that simply cannot be improved upon. They just are: simple, true, nourishing, delicious.

After I gave you a basic rundown of how mornings (and afternoons) go herewise, I decided that while I couldn’t make myself completely, wholly better, and while I couldn’t magically make every worry of mine go away, I could do at least something about it, and that something was to make duck fat potatoes. It might not sound like much to some, but to me, it felt like a pretty powerful antidote.

Potatoes have a deep, mystical healing power over me. It might be because of my Russian roots, but there is something transformational to me about a bowl or well-made mashed potatoes, or a skillet of hash browns, or these beauties bathed in duck fat (would that I had goose fat!) along with mushrooms. 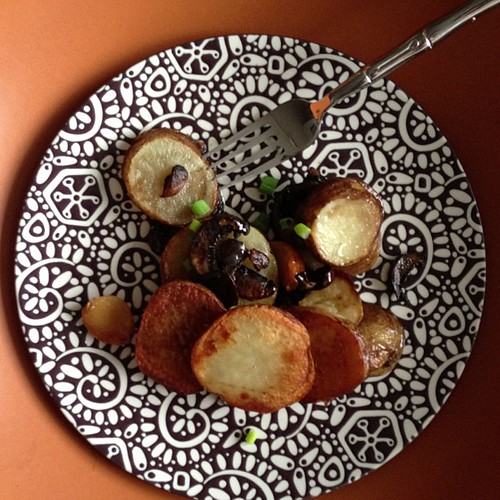 Now I have a feeling that some of you scanning the recipe will balk at the amount of duck fat. One whole cup seems egregious and over-the-top, even, but I tried it with half the amount of duck fat and it wasn’t luxurious. It was delicious, but nowhere near the bliss I tasted when I used the indicated amount. Do not try to tweak this recipe: just trust it implicitly and it will reward you amply. Nigel Slater, who supplied the recipe below, has probably never had a culinary misstep. Everything I’ve made of his has been perfectly complete. Slater is a kind of a minimalist: when you first glance at his recipes, they seem sparse, almost lacking. But, what he is, actually, is someone who truly celebrates individual ingredients. He has such great amount of respect for it, that he is restrained in how he treats them. If he says it’s going to taste good, you better believe it.

So just remember: since you’re using duck fat (or goose fat), just use the indicated amount because you’re going down that slippery slope anyway, and you might as well just go down that slope in style.

Words to live by, friends.

Duck Fat Potatoes with Mushrooms
Adapted from Nigel Slater, via The Guardian

I told you above not to change anything in the recipe, but then I went and added a bit of chopped scallions as a final touch. I did this because I reminded me of a dish my mom used to make when I was little, which was fried potatoes and mushrooms. Of course, I also added a healthy dollop of sour cream to my fried potatoes and mushrooms and mixed everything together. I wouldn’t advise doing it here because the taste of duck fat (or goose fat if you have it) is luxurious and should’t be covered up.

1. Heat the oven to 350 degrees F (180C/ gas mark 4) with the rack in the middle. In a large ovenproof skillet set over medium heat (cast iron is perfect here) melt the fat. Add the sliced potatoes and let them cook, without moving the potatoes, for 10 minutes. This will allow enough time for the bottom of the potatoes to caramelize. Some of the potatoes will not touch the bottom of the skillet and that’s okay; don’t worry about them.

2. Add the mushrooms, garlic, bay leaves, and salt, and toss everything together. Transfer the skillet to the oven and bake for 40 to 50 minutes, checking and stirring a bit midway through the process. You want the potatoes to be soft and lightly browned, with a few crispy bits here and there. Serve hot, garnished with the scallions.