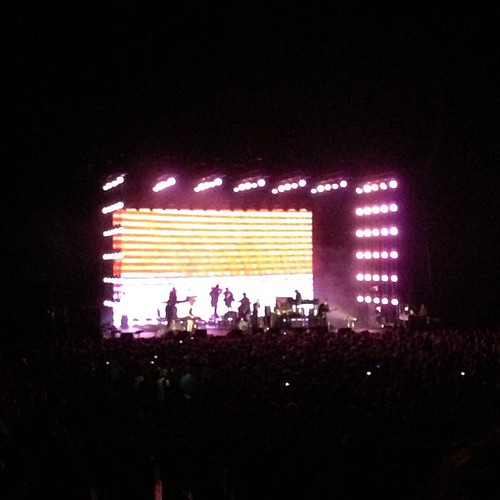 Happy Friday, friends, though if you’re living in the Northeast, you probably woke up to grey skies, rain, and a general desire to stay in bed all day in your jammies and eat bonbons and finish that Season 4 of Arrested Development. [Or is it just me?] I quite welcome some forced indoor time though as this week was an unusually busy one. On Tuesday, our friend, Heidi, who works with amazing folks (and pigs) at Mosefund Mangalitsa, got married. She decided to hold her reception at Marc Forgione’s namesake restaurant (it is through Marc that I met Heidi and we became friends) and Andrew and I got to be a part of her joyful celebration.

Wednesday night found us at the Barclays Center (for the first time) at The National concert. It’s hard for me to talk about their music not only because there’s a deep, visceral connection there, but also because it is their music that is getting me through some very difficult stuff at the moment. It’s letting me grieve in a way that I need to grieve: privately, internally, quietly. In any case, if you’re a music fan, and haven’t listened to their music, I recommend that you do. They’re a rare band with no weak spots in albums (and believe me, I’ve listened to them all). Also, I posted a video of one of the songs they did for the encore, Vanderlyle Crybaby Geeks. Check it out if you’re curious.

And last night was another late night for me, but it’s not a bad thing. It’s just that after three nights of being out and about and social, I desperately need a quiet night with a book. It’ll help me recharge and feel less frenetic. So, I hope that your weekend is just that: restful, calming, subdued, but also fun. Until next week!

P.S. We bought a new vacuum cleaner because repairing ours would have cost more than its amortized value. We splurged: it’s a Miele Olympus. I did a lot of research on this and came to the conclusion that we don’t have enough money to waste money. I’d rather buy something once for several years and not worry about it, which has been the case with my friends’ experiences with this model. Also, a funny thing happened: when I’d mention to folks that we’re are looking for (or already bought) a new vacuum and this is the leading contender (or our chosen model), people from all age groups and stages of life waxed poetic (poetic!!) about this particular model. Words like “love” and “adore” and “epic” were used in relation to vacuuming and how I might, even, feel about life. So far, the contraption sits disassembled (No disassemble!*) in our living room, but rest assured, I’ll take it for a spin in our apartment this weekend (see, I told you I’ve exciting plans ahead)!

*major points to anyone who knows where the quote is from!

A new kind of restaurant emerges – where 100% of profits go to a non-profit started by the founders that supports members of the culinary community who encounter unexpected financial hardship.

The most profound moral argument against eating animals summed up by one amazing kid. This made my eyes well up.

Ben Bernanke’s speech to Princeton graduates. Point number 9 – who are you, Ben Bernanke? You just might be the most sentimental Fed we’ve ever had. Economics and romance: my inner nerd is smitten.

Communities can save money by saving farmland.

Attention New Yorkers, and Brooklynites in particular. Looks like the MTA plans to shut down the R train Montague tube for a least a year. This is going to be affecting A LOT of people.

Another piece on the benefits of coffee. Seriously, I’m not one to tell people what to do, but my friends who have completely cut out caffeine, it’s okay to have a cup, really. In fact, maybe even good for you.

And, finally, your weekly dose of nerd:

This week, the Supreme Court ruled 5-4 on the DNA swabbing of seized suspects. In a rare case, conservative Justice Scalia voted against the ruling along with three liberal judges: Ginsburg, Kagan, and Sotomayor, and delivered a scathing dissent from the bench, which is also rare. Sounds right and sane, yes? Well, not so fast, say Akhil Reed Amar, a constitutional law professor at Yale and Neal K. Katyal, a former acting solicitor general for the US, and a national security law professorat Georgetown. Their argument is that Scalia misread critical portions of the Constitution by failing to define what constitutes and “unreasonable” search. [Disclosure: when I first read the ruling, I shocked myself by siding with Scalia. However, I have a huge nerd crush on Amar (his expertise in Constitutional Law is blows me away every time I hear him talk) – and he and Katyal make formidable, and well-grounded argument in how Scalia failed to understand the 4th Amendment.] And finally, as if your head wasn’t already spinning from nerd-talk, here is the New York Times Editorial condemning the ruling.