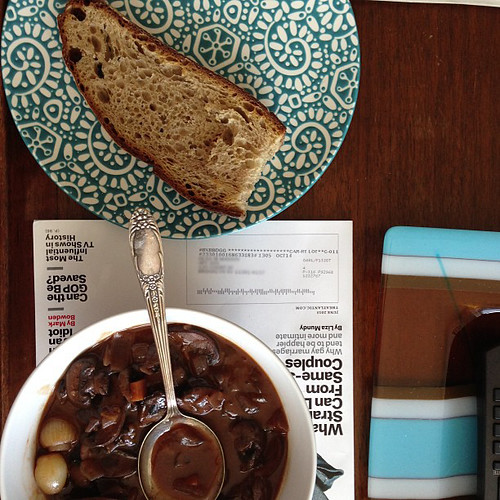 Friends, I’ve been meaning to publish this recipe since Monday, but it has been a seriously busy week. That book I was working on for most of the last year is finally coming back to me, warts edits and all, come Monday. I’m bracing myself: With regular work, the private chef gig, and these edits, I might go into a cave and just work until the edits need to be submitted.

Here is another recipe I made for the client last week: mushroom bourguignon. I adapted it from Deb as it was a perfect “meaty” recipe to satisfy a non-meat eater. My client’s husband eats fish, but we agreed that I will cook a mix of meat and non meat to make sure that my client gets enough different proteins. The husband just agreed to eat all the dinner components that work for him and off we went. But seeing as at home we eat very little meat to begin with, it didn’t feel like a stretch to create many vegetarian meals that had all the heft and flavor of animal protein.

I’ve been making Deb’s mushroom bourguignon for years now, and truth be told, I prefer it to eating the original beef version. It’s fair to say I’m a terrible meat eater and almost always gravitate towards a pile of vegetables (I make exceptions for prosciutto, salumi, and bacon). I’ve been this way since I can remember. As a child, nothing made happier than eating this salad. Although despite my meat indifference, I retained a strange fondness for bologna (don’t judge me).

Deb’s recipe is fantastic and I only tweaked it a little where I think it worked better for me. For example, I separated my mushroom cooking into two batches, which allowed my mushrooms to brown evenly and not steam. Steamed mushroom – yuck. Browned mushrooms – yum. I used only a hint more olive oil and butter than she originally indicates, but that’s because of the batch browning. Oh, and I kept the stems because I like the way they taste in a stew. If you mind the stems, by all means, remove them and save for another use, like a nice mushroom stock.

I also discovered what worked best for me is a pot that’s about 8-quarts deep and round. I like the way evaporation happens there and how my mushrooms brown. I don’t, for example, recommend a 5-quart Dutch oven as it’s not enough surface area for mushrooms. Unless you want to fry them in four batches instead of two.

I also don’t measure out my thyme, but throw in a few sprigs and figure the leaves will fall off when the herb is cooked through. What remains, I fish out at the end of cooking.

Another tweak I made is to add the pearl onions a bit more in advance than Deb’s recipe, because I really like my cooked onions to slump into a gentle submission. I want them to be a few degrees away from turning into puree. If you prefer the pearl onions firmer, add them as Deb originally suggests – 5 minutes before the stew is done.

And lastly, in an effort to eat a bit less processed flour and a few more whole grains, I started to serve this stew over cooked barley, and while I’m no one take anyone’s noodles away, I am much happier eating barley than noodles. I’m fuller longer, and I love the nutty taste of barley when combined with a rich mushroom stew. Mushrooms and barley – not a huge stretch here.

As far as ingredients go, I always recommend buying mushrooms whole and cleaning them, yourself, with a damp tea towel or a paper towel (for the latter I recommend using Bounty because it’s the most durable). Don’t rinse your mushrooms in the water – mushrooms are like sponges, and immersing them in water will let them absorb even more moisture than they already have (which is a lot), which will affect how they brown in your pot (or, unfortunately, steam if they are have too much liquid).

However, if you’re making a weeknight dinner, and in a time pickle, feel free to use pre-sliced mushrooms sold in many stores. It really does save you quite a bit of time, and I’m always in support for a faster weeknight meal if it makes you can actually cook it. If making pretty little dices of a carrots seems like too much work, just slice the carrot and be done with it. No one is going to sit there at dinner and point out to you that your carrot isn’t diced as per recipe. And if they do, kindly take their bowl away.

In an 8-quart Dutch oven or heavy stock pot set over high heat, warm the 1 tablespoon of the olive oil and 1 tablespoon of butter until the butter starts to foam. Add half of the mushrooms, and cook, without moving, until they begin to darken, but not yet release any liquid — 3 to 4 minutes. Transfer to a bowl and set aside. Add another tablespoon of olive oil and another tablespoon of butter and repeat the searing with the second batch of the mushrooms. Transfer to a bowl and sprinkle with 1/2 teaspoon of salt. [I recommend using a wider pot for the searing and cooking here because you want the mushrooms to have enough room to brown. If you use a smaller pot, you’ll crowd the mushrooms and instead of searing, they will steam and you’ll wind up with a less flavorful dish.

2. Lower the heat to medium and add the last tablespoon of olive oil. Add the carrots, onions, thyme, 1/2 teaspoon of salt, and several grinds of black pepper into the pan, and cook, stirring occasionally, until the onions are lightly browned between 7 and 10 minutes. Add the garlic and cook, stirring, for 30 seconds.

3. Pour in the wine, scraping any stuck brown bits off the bottom (it’s called a fond), then return the heat back to high and cook until the wine is reduced by one half, about 5 minutes. Stir in the tomato paste and the broth. Add back the mushrooms, with any juices that have collected at the bottom of the bowl, and the pearl onions, and once the liquid comes to a boil, decrease the heat to low so the mushrooms simmer. Cook, uncovered, until the mushrooms are very tender, and the onions are soft, sunken, and enveloped in the sauce, about 25 minutes. Taste the sauce and adjust seasonings.

4. Using a fork, combine the remaining butter with the flour until it is one uniform mass, and stir it into the stew. Let the stew simmer 10 more minutes until the sauce is the consistency of gravy. If the sauce is too thin, simmer it in 5 minute increments to reduce to the right consistency. Fish the thyme sprigs out and discard them. Serve over cooked egg noodles or barley with a dollop of sour cream, if you like, and a sprinkling of parsley.