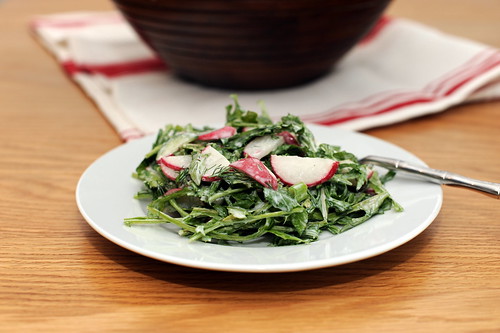 Well, you guys are really just swell, you know that? A girl gets gushy and you leap in there with her and get gushy right back! Thanks! And in case you were wondering, it’s making me grin from ear to ear. I feel a gigantic internet hug coming on, do you?

This salad isn’t just any salad, so by pushing the post back, I’m sure I’ve bruised its feelings somewhat. By now it’s probably off in the corner somewhere skulking and pouting. It was all ready for prime time and then, unceremoniously and without warning, it was pushed aside. 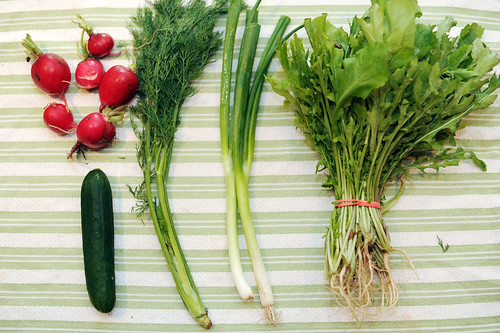 I feel badly about the hurt feelings, but I feel like I’ve good reason, what with getting all distracted with shiny things. It’s terrible – I’m that girl now – I’ve named the ring “the shiny”, and the shiny is seriously ruining my ability to get anything done: typing, chopping things, cleaning up – I catch a slight sparkle, and then it’s like goldfish – oh look, there’s a castle! – now what was I doing? Last night Andrew was talking to me only to realize that while I was listening, I was staring at the shiny. I think he’s thinking of switching it and replacing it with a ring pop. At least he’s guaranteed I’ll be listening to him again.

The funniest thing about getting engaged is that the second you do it, you get questions like, “Have you set a date?” and “Do you have a wedding theme?” To the first one, I politely say no, though I’m tempted to say that even though we got engaged three days ago, we already got married, and what they didn’t get the invitation? That second one puzzles me a bit, because it makes me think of actually making people adhere to an honest-to-goodness theme. Like, everyone has to come dressed as a pirate, or as your favorite character from “Lost”. Or better yet – an 80s’ costume wedding – bring on crimped hair, shiny spandex, and lacy, fingerless gloves a la Madonna circa “Like a Virgin” era. I could go on and on. 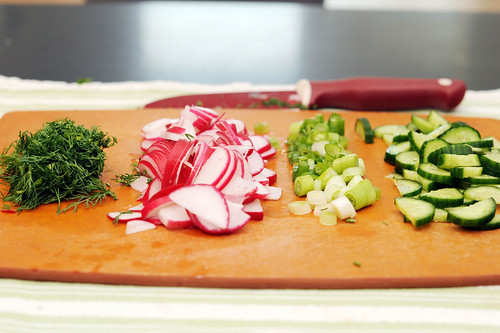 But, do you see what I just did here? I totally shoved the salad aside again. I’m in trouble now. Let’s get right to it, shall we? Lest I make the vegetables angry.

This is the salad that I want to write poems about. I want to tell you, in ornate and beautiful prose just how incredible it is, and how you must drop everything right now and rush into the kitchen to make it. But somehow, in this case, I can’t seem to adequately put pen to paper – how do you adequately describe something that was your favorite childhood thing to eat? Remember, when you were a kid, and everything was larger than life? Days seemed longer. Birthday to birthday felt like an eternity. And those childhood favorite foods – they were the stuff dreams were made of. 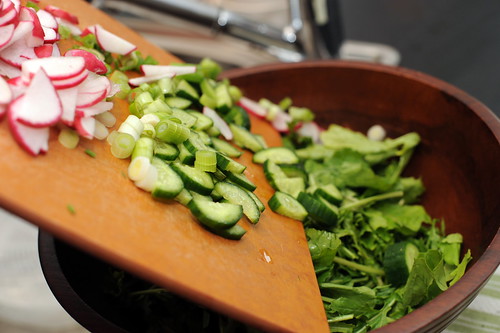 When I think of this salad, I think of spring in Russia. I think of the ice cracking and moving on the Neva River. I think of tiny crocuses poking out their buds from underneath the snow. I think of snow mixing with the mud to create a dingy slush that tattoos itself into the crevices of your boots. I think of my childhood next door neighbor Alex, who now, oddly enough, lives in Switzerland, whose birthday is on March 21, and whose mother would always make this salad for the kids for his birthday party every year. I think of his living room and a large rectangular table with all the kids around it, shoveling food in our mouths. And I think of me, shamelessly monopolizing this salad.

I could eat it every day. Imagine a large mixing bowl filled to the brim with these ingredients – did you imagine – I could eat that. All of it. In one sitting. The salad so simple it hardly needs a recipe: cucumbers, radishes, scallions, dill, sour cream and salt. That’s it. In the recent years, I’ve been playing around with greens and settled on arugula – it has the perfect bite to complement the sharpness of radish and the kick of the scallion. But the original version contains no greens – Russians don’t really have a place for them in salads – the real focus is on the vegetables themselves. 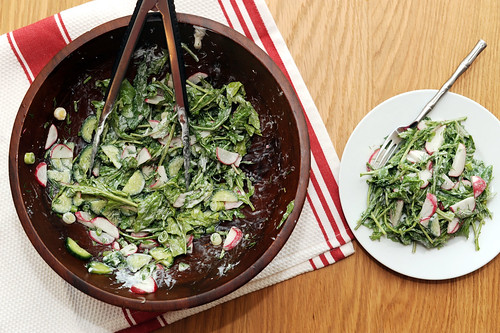 And whereas I might be slightly biased (after all I grew up eating this salad and my cravings could be purely based on nostalgia) I’ve making it a lot around here and Melissa has fallen for this sald in the same way that I have as well. It feels so good to know that someone else, who might not have grown up with it, loves this salad as much as you do – it’s quite gratifying. 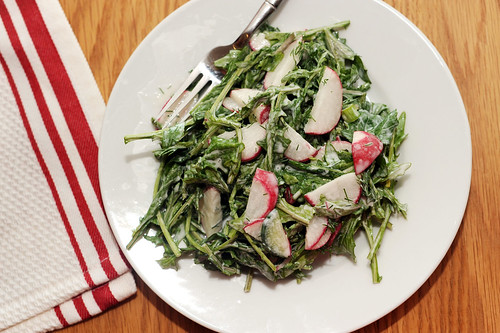 So here is my missive to you – please make this salad. And please, as a favor to me, make it exactly as I tell you below – at least the first time around – before trying to adapt. If you think your taste buds want adaptation, by all means! But first – give this a go. I hope you like it. I have a feeling you will. This salad deserves all the spotlight in the world – and I hope it can someday forgive me for making it play second fiddle to my easily-distracted self. I promise – it’ll never happen again.

Place the arugula, cucumbers, radishes, scallions and dill into a large bowl. Add the sour cream and salt and toss well to combine. Serve immediately.