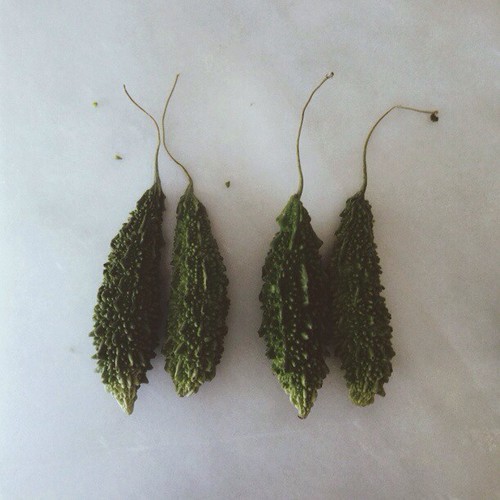 Good Friday morning, folks. Hope your week went well and that you are ready to scale back some this weekend. We’re off to Boston for a wedding (a Sunday wedding as such) so the recipe testing will have to take a break for a few days. That picture above you see is a picture of bitter melon, aka bitter gourd. A friend of mine got it in her CSA and was so mystified by its presence (well, first she was mystified by what it was) that she unloaded her exotic bounty unto me, and I took to the interwebs (thanks, social media) to seek advice of those who knew better. I’ve had plenty of bitter melon in before, and knew I liked it. Learning to make a new dish with a vegetable that normally isn’t hanging out in my crisper was also alluring. Cooking something not for a cookbook and just for the sake of cooking sounded even better – and I was hoping that maybe, just maybe, I’d share this new recipe with you.

Alas, it wasn’t meant to be. The bitter melon proved to be so bitter, even after cooking, that I had to transport the whole mess of it right into the garbage can. Of course, now I’m determined more than ever to buy more bitter melon and cook with it until I get it right.

In other news, Andrew was a last-minute guest on an Al Jazeera America news show last night* speaking about climate change and the IPCC report that got released (to so much fanfare, you all woke up to see the press conference at 4am EST, right?) this morning. If you have, then Andrew was in good company; and if you haven’t – man, you missed one titillating press conference. Or so I hear. The cat and I were sleeping in the other room. One of us, and I’m not naming names (ahem, Forrest) was snoring.

Folks, I wish you a lovely weekend. I hope to come back with a recipe soon! I might just post a picture with a paragraph and a recipe because I tried something yesterday and it was not only delicious, but really easy and useful. So fingers crossed. Maybe I’ll do some photo editing over the weekend (when I’m not writing recipes and headnotes or dancing the Sunday night away at a wedding). In the meantime, I wish you rest and calm for the next few days.

*I’ll try to link to it if I can find the link.

PS Things might look slightly differently here – I’m in the process of tweaking a few things here and there. Hopefully you all like the new look and upcoming changes!

Jimmy Fallon and Justin Timberlake show us how dumb we are with hashtag overuse. But seriously, folks, can we tone down the hashtag abuse? You know who you are.

Amicus Tumblr – the first time tumblr has been used in a Supreme Court brief. Here is the actual Tumblr page.

Popular Science is shutting off comments. Here’s why.

Bon Appetit publishes a funny obit on the death of the cronut. For folks unfamiliar with edit-speak, TK means “to come” and one of the reasons it’s used is because you can easily search for it in a document without coming up on a word.

Crushing a little on George H.W. Bush partly because of this. Partly because he’s just rocking those different color socks.

How alcohol conquered Russia. A quick scan of history where the state, pretty much consistenly, aided easy access and cheap consumption.

Folk, I apologize for the silliness of this link, and also, I’m not one to read the Daily Caller. However, this slide show that shows turtles who look like Senate Minority Leader, Mitch McConnell, is not to be missed.

Read this: The looting of pensions funds. Then read this: Enron’s plan to loot workers’ pensions. And if those two things don’t make you really angry, then I don’t know what will.