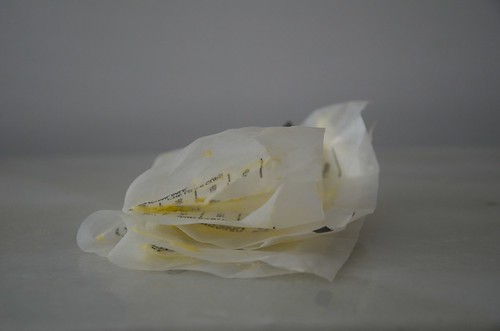 I stopped by a friend’s house recently while she was in the middle of baking something. She had softened her butter earlier in the day and was about to cream it with sugar. Carefully, she peeled the wrapper off the butter, and into the mixer bowl the butter fell. Then, she crumpled up the butter wrapper and threw it away.

“Don’t…” was all that I managed to blurt out, but it was too late – the wrapper landed deep in the garbage bin.

“What? Why? It’s just a butter wrapper,” she said.

A wrapper that’s been generously slathered with softened butter – that could’ve been used for buttering the pan that she was using to bake. When I’m baking with butter, it’s a natural by-product, so instead of softening more butter, I just use what is left on the wrapper and most of the time, it manages to be enough. Plus, it’s a great way to be efficient and frugal in the kitchen. 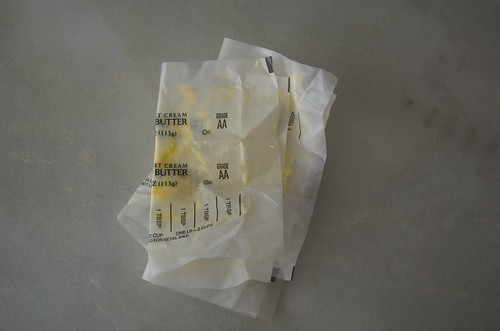 And since Thanksgiving and Hannukah (Thanksgivukah? Hanugiving?) are right around the corner, I suspect there’ll be some baking in your future.

Sometimes, I wind up with more butter wrappers than needed for buttering various pans. When this happens, I fold the wrappers as neatly as I can and place them in a sandwich-sized ziploc bag that is then stored in the freezer until needed. I usually take a wrapper out and let it sit on the counter at room temperature for about fifteen minutes. And if the butter is still not very soft, I usually warm it up with my fingertips.

I’ve been doing this for years now and have. But I didn’t think of putting it on the blog until Andrew saw me saving those wrappers and suggested that SR readers might benefit from this tip. Hopefully you will find it useful – let me know if you do – I won’t be offended – really.