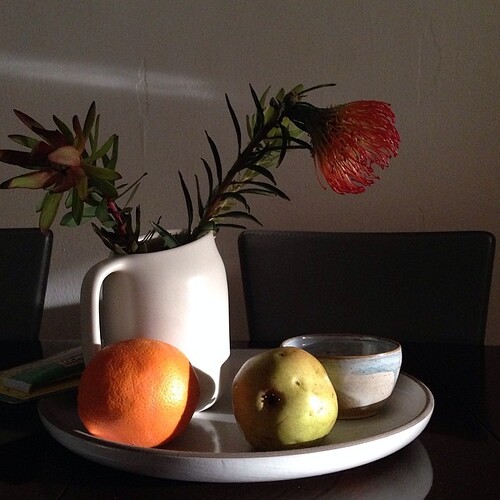 Before I do the “big reveal” with the kitchen – not that you will be very surprised – I wanted to talk about lighting. I’ve been questioning doing the “final” summary post, but I suppose it’s always good review everything, list total costs, and do a retrospective: lessons learned, mistakes made, etc. I think that for those of you following along and reading this, the last post might be the best one to read first. Get the full scope, the big picture, and then start drilling down into specifics.

Before I get into the lightings specifics, I think it would be helpful if I gave you a bit of a background because it will help you understand why I made the kinds of decisions I made in regards to lighting.

When I was dreaming of my future kitchen, I had a huge deal-breaker stipulation. Since my previous kitchen didn’t have any windows, the next kitchen had to have beautiful, natural light. I talked a big talk.

When we started looking at apartments, I took a first stab at it without Andrew. I had a more flexible schedule back then and it was harder for him to be away from the office during the weekdays. Given how crazy open houses tend to be in New York, I decided that my “first look” was going to be pre-open house. 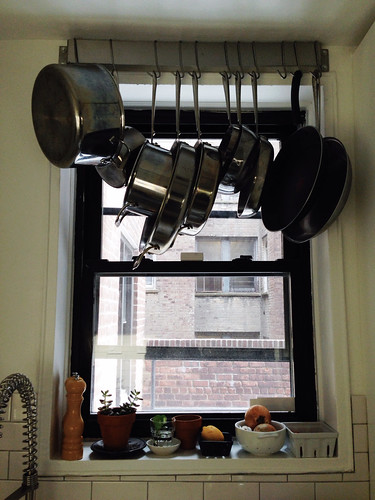 The first apartment I saw with natural kitchen light, had such terrible layout, that the kitchen would essentially take over the living room which was also the dining room, which was also tiny. I closed my eyes and tried to imagine throwing a large dinner party there – and there was no room for anything — or anyone. I tried to imagine where Andrew and I would relax after a long day of work, and if, say, children were present, where would they be? The apartment gave us a stark choice: small kitchen with a tiny living room or small kitchen with a tiny dining room.

In that same day, I managed to see another apartment with some natural light in the kitchen. But it was 30 percent smaller than our current apartment, was further away from trains, didn’t have a terrace, and had an odd layout where a good deal of its square footage was wasted narrow hallway space. The irony of that place was that it had a gut renovated kitchen, but I kind of hated the gut renovation: dark wood, Caesarstone, tiny ivory tile with ivory grout (yuck). Look, I can cook in any kitchen, but I had kind of hoped that it were my kitchen, the one I paid money for, I’d try to have it look my way. Anyway, I had a couple of reservations about that apartment and it was so early in the process, it didn’t even matter. The apartment wasn’t meant to be ours – it got scooped up within a week. And despite it being in mint condition, it was further away from some subway lines (I love being near the G train!) and the station was above ground, up three flights of stairs. I quickly envisioned freezing on the platform while waiting for a train – no, thanks! And then I tried to imagine, what if I had to lug a stroller up three flights of stairs? Ugh.

And now — our home has a terrace, bigger square footage, and a tiny home office! Does it need more love? Yes. But are we happier here? Absolutely. 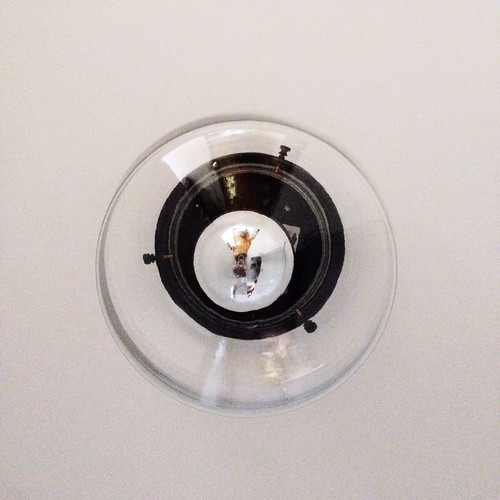 The kitchen in our new home does come with a window, technically. But it looks out in the back of the building over the garage roof. My office window – also cheap on great light – looks out there as well. I had high hopes for planting some herbs there in the spring, but a pigeon died on a fire escape over our window and bits and pieces of its carcass have been periodically plopping down in front of the window. This greatly distresses Forrest, and it greatly distresses me, though, I suspect, for entirely different reasons. Somehow, the prospect of herbs growing near a decomposing pigeon are looking less appealing.

So the window in the kitchen looks out onto someone else’s windows, one of which has a clothesline. Whoever lives in that apartment has the most interesting undergarments. Underwear, ladies’ I suspect, that easily cover your posterior and go down to the mid-thigh. Really expansive things they are. Also lots of odd-looking towels. It’s really quite a view – you should come over and see for yourself.

Anyway, outside of the undergarments, natural light is, well, at a deficit. It sort of mocks me a little bit. I can see that it’s somewhat light outside, but it barely makes a difference in the kitchen.

The result – the need for good, artificial lighting. Sigh.

Compounded with lack of natural light, our kitchen also comes with low ceilings. Not so low that we have to duck, but low enough that we immediately had to rule out any kind of pendant lighting. We had to get what is called “flash-mount” lighting.

Added to that is the fact that it’s a narrow, galley kitchen, the emphasis being on narrow. Which means the diameter of said lights had to be limited somewhat, because otherwise the cabinet doors would knock into lights. We knew we had to move one of the light locations over a bit, which added more to the cost, but we hadn’t much of choice in the matter.

The seller of the apartment made it a point to emphasize to us at the closing just how much effort he put into renovating the kitchen.

“I did it like I’d do it for my daughter,” he kept saying over and over.

I, wisely, kept my mouth shut, but kept wondering if his daughter was the type to actually cook and like polished pink granite. The kitchen is still small – even after our renovations – such is the name of the game, but the previous kitchen was the smallest I’d ever been in, with a rusted sink and a refrigerator that was too small even for a single person who didn’t cook.

And the lights that he left in the kitchen were so horrible, that I can’t even begin getting into it without getting upset. But trust me – they were so awful that even Andrew, who doesn’t get frothy-at-the-mouth talking about renovations, was appalled. But the most amazing thing is that ceiling lights were wired for GU24 base light bulbs.

I didn’t know what GU24 meant either. Specifically, I had no idea what that bulb connector was – I’d never seen one like it before. My father, who is a huge electrical nerd and knows all kinds of things had to look it up online, had no clue before that. At Home Depot, where I tried to describe what it looked like, unwisely leaving the light bulb at home by accident, they had no idea. What’s more is that GU24 isn’t even widely available. As it turns out GU24 pertains to fluorescent bulbs, and as soon as I heard fluorescent, I tuned out everything else. Fluorescent, in the kitchen, never mind anywhere else in the apartment, was a deal breaker. And if we weren’t willing to live with GU24, we had to pay our contractor to rewire it for normal screw-it-in kind of bulbs.

Which, of course, cost more money.

And then the search for the light fixtures began.

I looked everywhere and for a long time. Home Depot, Lowes, all kinds of lighting stores, Schoolhouse Electric, but I wasn’t finding something I really loved. I liked the severe industrial look, but it didn’t look right in that kitchen. Finally, as I was beginning to lose all hope, I did find few pieces at Barn Light Electric that I loved. And after lots of deliberations, after crowdsourcing the question on Facebook, Twitter, and beyond, and with lots and lots of great advice from Tim, (THANK YOU!) I selected the Letterman Clear Schoolhouse Flush Mount Light with a black base. 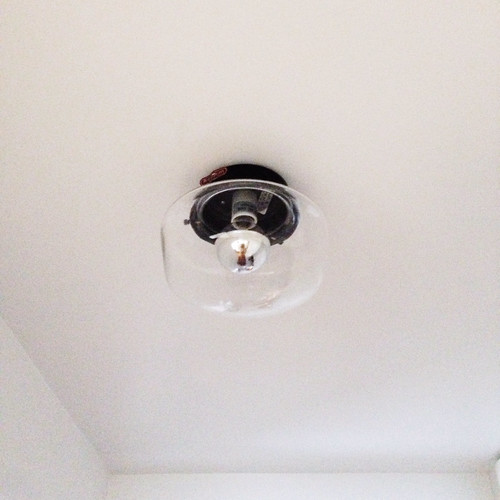 And outside of still searching for the right light bulbs – I want really cool – as in not warm as opposed to “hip” – light. I was surprised to learn that don’t like how the silver bowl bulb reflects the light on the ceiling in these odd waves, despite that they look super neat in my all-glass light fixtures. I love having just plain clear glass – so simple, so timeless – in some way they help to make the space feel bigger, which is kind of important in that smallish kitchen.

Now, for the under-cabinet lighting. Folks, it makes all the difference in our kitchen. Like, ALL. The kitchen wouldn’t look nearly as good or be nearly as functional as it does with these lights. We did some research on these and our friend, Jean, who is a kickass architect, suggested with go with these, WAC Straight-Edge LED lights, partly because they connect one to the other (which, correct me if I’m wrong, not all under-cabinet LED lights do) they provide a seamless stream of light. If you go with these, or any other, undercabinet lights, be sure that your contractor is VERY clear on what transformer you will need and how many. This brand is not cheap, but considering how awesome it is, I’m really glad that this was one piece of my kitchen budget where I paid a little extra.

A few emails with my friend Andrew Scrivani determined that I wanted cooler (and not warmer) light in the kitchen, because food photography is done in the cool light range. So with these undercabinet lights, the kitchen is bright and cheery. And once I find good lightbulbs for the overhead lighting, yellow light will be a thing of the past. Happy to hear all and any advice, if you’ve got any.

Is it natural light? No. But I’m trying to get as close as possible here.

In an ideal world, and an unlimited budget (neither of which is the case) I’d have kitchen with beautiful indirect light. Also – a pony.

We had a very tight budget on which we were buying. Heck, I consider ourselves lucky to be able to buy period (we’re two writers with very modest incomes – and mine is hardly predictable), so to complain of a kitchen without natural light seems kind of an *sshole move. We found a great, spacious apartment with a terrace and a home office, and we jumped on it. In the morning, our bedroom and living room gets this beautiful, eastern light. And in the evening, for a blissful half hour, the office is bathed in golden glow so beautiful, it’s distracting.

Besides, all the mishaps aside, I find us to be incredibly lucky to have a little money wiggle room to do the kitchen renovations. And yes, there are lots of smallish repairs here and there that we’ll have to make, but this way, we truly get to make the place ours. Is it ideal to have a kitchen where I pretty much always have to have the lights on? No. But do I love it still and will it be the kind of kitchen where I get to have a lot of fun testing and developing recipes? Absolutely. After all, I know people with six-figure kitchen renovations who don’t cook, and my favorite and best cooks, chefs, and writers, all operate in tiny spaces a tiny counter (or two) if they’re lucky.

So, I think, insofar as lights are concerned, I think I covered it. If I haven’t, and you still have outstanding questions, by all means leave me a comment below.