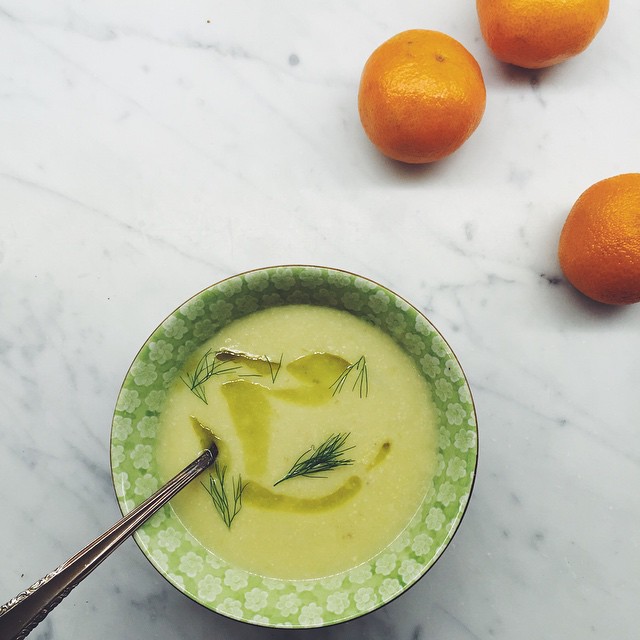 Greetings from winter wonderland and the fortress of sleep deprivation; a hastily written dispatch here! Quickly, before Avi wakes up; before the snow melts!

I had initially thought I’d missed the soup season. It’s March after all, and I am hearing complaints from everywhere just how over winter they are. I’ll agree that the cold has been relentless and painful; but here in New York, we got the shaft as far as snow is concerned. If we’re in for a mild winter — fine; but if it’s going to make me pile on layers, please bring on the snow. I don’t want to suffer in vain.

I wanted to tell you about leek and potato (potato and leek?) soup before Avi was born. I had gotten into the Sunday cooking habit of making a large batch while cooking (and freezing) other things. But then I gave birth, and almost six weeks later, I’m still not better off managing my time. Because the concept of “my time” has, at least for awhile, been radically altered. I’m on Avi’s time, Avi’s schedule. I’m still wrapping my brain around that whole parenthood thing. Talk to me in a few years – I bet you I’ll still be trying to grasp it. 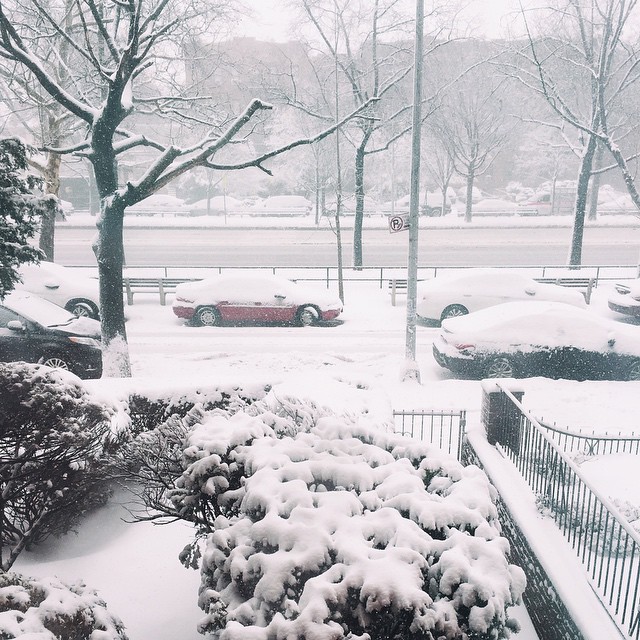 A lot of you have emailed me and said how much you appreciated my honesty about feeling conflicted about this new stage. You told me it would get better. You shared you had felt the same in the past and were too ashamed to admit that not only did you not enjoy this phase, but downright hated it. I say to all of you, enough with us all (including myself) beating up on ourselves (and possibly one another) for feeling grumpy, unhappy, even maybe resentful of this new role. This has been a huge, huge change, and I’m not so good with even the slighted alteration to my routine. Imagine not only having your entire route being blown up to smithereens — and now imagine that this routine is the one thing keeping your ever-present anxiety at bay. As conflicted as I am to write the following, I must be honest: it’s okay not to enjoy this part; it’s okay to grow into it; and it’s okay to take it day by day. This mantra I repeat to myself many times a day — over and over. Sometimes, I even believe it. I’m still finding my way through the thick fog. There are moments when I feel mighty and powerful; and moments when I am paralyzed with fear. 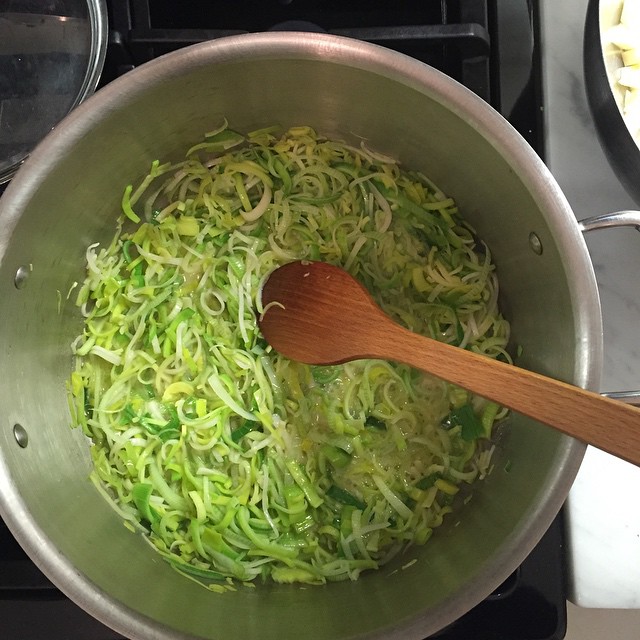 While leek and potato soup is a pretty humble and average thing (I’ve gone back and forth on whether or not it’s really even worth writing about) — an infinitely forgiving thing — we’ve grown quite fond of it because it’s become part of our weekly cooking routine. Shauna recently wrote a beautiful post about routines, and it couldn’t have come at a better time as we’ve been trying to settle into a bit of a cooking schedule. Not only does it save money, but it somehow becomes a comforting ritual. Sunday nights are roast chicken nights; Mondays are soup nights; and so on. If you don’t already have a recipe for leek and potato soup you like, I think you may want to give this one a go. Its main difference, from others, is the addition of a parmesan rind and some grated stuff — I think it really gives the soup more dimension and elevates it from humble to somewhat fancy even. Leeks and potatoes are inexpensive and it’s likely you already have them in your pantry. As for the dairy addition, you can do as you please: heavy cream, milk, half-and-half — even buttermilk. It all works, which is great, because if there’s one thing I hate is to have to purchase one particular dairy product just to make one dish. Whatever you’ve on hand – use it.

And with that, I’m going to run off; there’s a diaper that needs to be changed.

Leek and Potato Soup
While you can use whatever dairy you have on hand (see above), I’m pretty keen on using Yukon Gold potatoes in the soup – which give you the perfect balance of starch to moisture, yielding a silky smooth soup. If you’re in a possession of a Vitamix (a pricey pricey gadget that is worth its weight in gold), you will wind up with the kind of texture you get at three-star Michelin restaurants. Given my preoccupation with all things baby right now, I just use my stick blender and leave a few errant pieces of potato and leek in, and it’s still pretty good. Last, but certainly not least, don’t forget to fish out the parm rind before blending!

Thinly slice the leeks and clean in 2 changes of water bath. [Place leeks in a large bowl and fill with cold water. Let stand 5 minutes so all the dirt/grit settle on the bottom. Gently, using a spider, lift the leeks out of the water and onto an absorbent towel. Repeat once or twice more, depending on how dirty the leeks are.]

2. In a large soup pot set over medium heat, melt the butter and oil. Add the leeks and a generous pinch of salt and sweat leeks, stirring, for 5 minutes. Decrease the heat to medium-low and cook until the leeks are tender, approximately 20 minutes, stirring occasionally.

3. Add the potatoes, stock, and cheese rind, increase the heat to medium-high, and bring to a boil. Reduce the heat to low, cover, and gently simmer until the potatoes are soft, approximately 30 minutes.

4. Turn off the heat, remove and discard the cheese rind, and puree the soup with an immersion blender until smooth (if you want to step it up texture-wise, use a good standing blender, such as a Vitamix). Stir in the heavy cream, buttermilk, cheese, if using, and white pepper. Taste and adjust seasoning if desired. Sprinkle with chives, if using, and serve immediately.