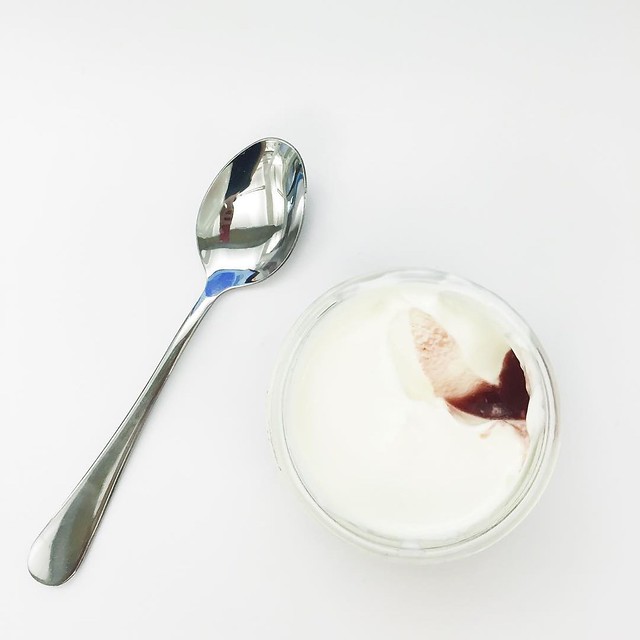 In the first few weeks that we brought Avi home, I was convinced that I’ll never cook again. I was tethered to him night and day. Between feedings, pumping sessions, more feedings, a few stolen naps here and there, and severely fractured sleep, I thought that throwing a piece of meat in the slow-cooker and dumping tomatoes over it was going to be as advanced cooking as I was ever going to do. But you good people, you assured me that one day, in not so distant future, I would cook again. And I didn’t believe you. Honest to goodness I thought you were all full of shit. I even laughed to myself about it – the kind of mirthless laugh that’s full of regret. Cooking was, is, and will be the way I anchor myself to the world. It’s the way I know how to make myself feel like I belong somewhere. And not having that piece of myself made me feel unmoored.

I’ve been meaning to drop in here sooner and write about postpartum anxiety, and somehow I haven’t been able to find the right words. I still don’t think I have them, but screw proper phrasing and waiting for the right language to present itself. Here’s the gist. Around eight weeks after Avi was born, I decided that what I was feeling and going through wasn’t healthy. In addition to being severely sleep-deprived and shell-shocked from transitioning from a household of two adults and one large cat, to a households of two adults, one large cat, and a tiny screaming baby – who refused to sleep anywhere but on a human (which at nights meant me) – I was also severely anxious. 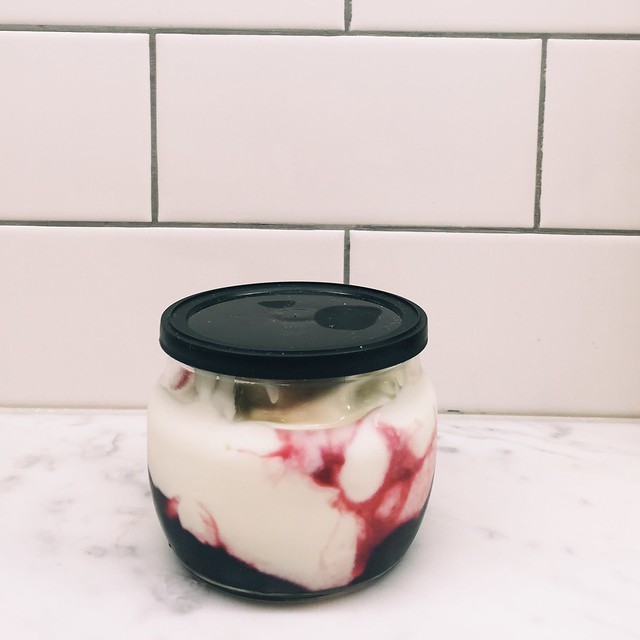 Now, I should probably say that I’ve been anxious my whole life as long as I can remember. And what I always prided myself on was that I felt like my anxiety was a tool that helped me accomplish things. I thought it was something I had learned to reign in. I felt superior (I don’t need drugs – I’m fine!) and highly (!) functional. Anxiety was my defining feature. It was enabling – not limiting.

But giving birth changed that. Suddenly, it didn’t feel like I was in control. My anxiety was greater than me – greater than my environment – and it consumed me entirely. It felt like a tidal wave had come at me and swallowed me whole.

I doubted every single decision I had made, and in particular, I doubted my decision to become a parent. I wasn’t depressed. I didn’t want to harm myself or the baby. But I wasn’t taking any pleasure in this new role. Not an ounce. It didn’t help that Avi was a fussy newborn; that I was awake with him at night for hours; that breastfeeding was challenging, painful, and anything but a given.

And so finally, around week eight, I decided to seek help. I reached out to friends about recommendations for psychiatrists; I talked to any friend who was willing to listen about what was going on inside my head. I cried to my mom and mother-in-law and spilled all my new motherhood frustrations to them. And they were nothing short of amazing – they didn’t judge and didn’t try to convince me otherwise. They just listened. My friends told me of their own struggles. People I barely knew called me and talked to me for hours about their own experiences. One of them assured me that one day, I’ll feel normal again and will struggle to remember that feeling of utter paralysis and despair. I didn’t believe her then, but Molly, you were right – thank you. 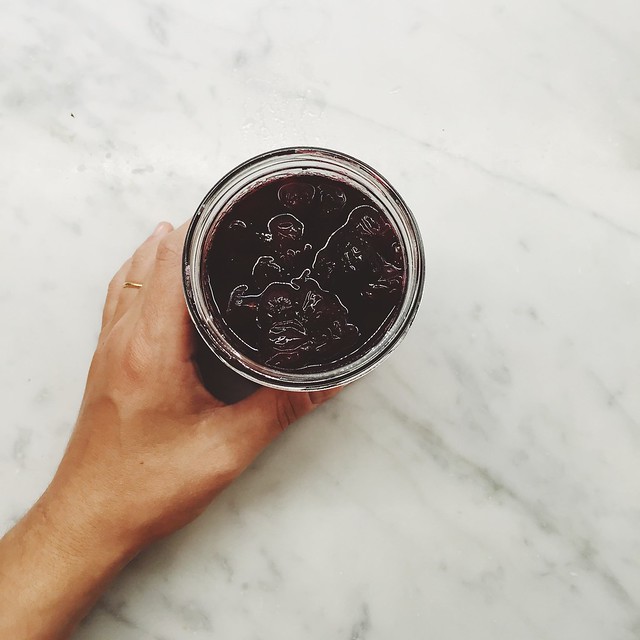 I went to see a psychiatrist – one who specialized in reproductive issues. I couldn’t figure out what was wrong with me because I had heard about postpartum depression but I knew I wasn’t depressed. She listened to me for an hour; I told her about my symptoms and emotions, and she diagnosed me with postpartum anxiety, which is something I had never before heard of. And when she asked if I was considering medication, the answer was yesyesyesyesyes. I needed to get better; I was so desperate. She wrote me a prescription right away – and warned me that it might take several weeks for me to feel closer to the baseline.

It took about four weeks. By then Avi started sleep longer stretches. And by week ten, we decided to sleep-train him. I was going back to work and I needed to get up in the morning and not be completely shattered. And while I know that sleep training is not for everyone, it was absolutely the right decision for us. I stand by it one hundred percent.

The most interesting discovery for me about being on meds has been that I’ve realized just how wrong I’d been my whole life about anxiety’s effect on me. I had thought that it was the tool that helped me get things done, but instead, it made me less productive because I had spent so much time managing my anxiety rather than focusing on tasks at hand. The best way I can explain this to someone who’s never experience anxiety is this: Imagine that you have a nice, large window you can look through and you see a big tree, full of green leaves, and a patch of sky in the background. Now, imagine that you decided, because it’s spring, or because it’s time, you were going to clean the glass in your window. You go back inside, post cleaning, and look at the tree. And you are speechless, astounded by how beautiful, verdant, and lush it is. How magnificent and blue the sky! Because while you saw those objects before, you couldn’t see how bright and beautiful they were. And now you do. That’s kind of how I feel right now versus before. And that lack of anxiety has not made me less motivated or driven.

I write all this because I keep thinking that it’s odd I’d never heard about postpartum anxiety before. I’m sure it’s not that rare. But I’d never read up on it, and all the postpartum talk I hear is on depression, which is also important for us to discuss and keep in mind. And I hope that maybe this might help someone (anyone) — in case they are going through it or know someone going through it. Because we need to talk about these things – they are important. Motherhood, as I’m learning, is tough enough. Great, beautiful, full of joy – but also really friggin’ tough. And the more we talk about things that are hard, the more united we all are. 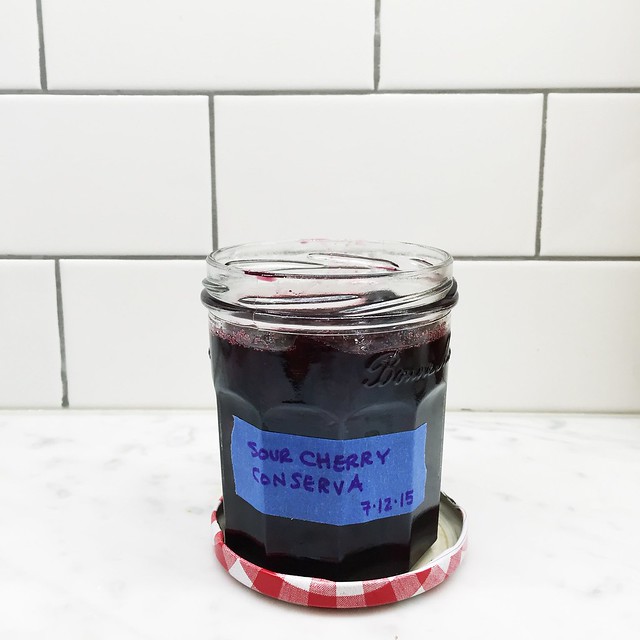 But back to cooking…

I was wrong that I’ll never cook again. So, so wrong.

I’m cooking! Most nights, in fact. And we’ve even had our first official dinner guest last Sunday – a colleague from London. She requested roasted chicken, and despite it being ninety degrees outside, I ably marched into the kitchen and made roasted chicken with mustard vegetables – a recipe I learned from Marc Murphy when I was writing his book and have since adapted. We had popsicles and sorbet for dessert – neither of which I made – and it was pretty much the best Sunday supper ever.

I’ve also been trying to bring breakfast and lunch to work in an effort to save a little money, because childcare is expensive, folks! I’ll share my favorite lunch in another post, but for breakfasts, I’ve been adding a little jam on the bottom of a jar and topping it with plain whole-milk yogurt. Lately, since sour cherries are in season (if maybe only for another couple of weeks, so hurry!), I’ve been making this loose and easy sour cherry conserva, which takes about half an hour (not including pitting the cherries) and is divine with tangy yogurt. I imagine it’ll be really good spooned over vanilla ice cream, and even blended into milkshakes. In any case, here it is, and apologies for the world’s most awkward segues, and also, no proper measurements (grams), or pictures – such things are a bit challenging these days.

Combine the cherries, sugar, zest, and salt with 1/4 cup water in a medium heavy bottom saucepan set over medium heat. Bring to a simmer, decrease the heat low enough that the fruit and liquid are at a bare but noticeable simmer, and cook, uncovered, stirring from time to time, until the liquid is the consistency of thick syrup, about 30 minutes. Remove from heat and stir in lemon juice. Taste and add more lemon juice if needed. Let cool to room temperature and transfer to a clean jar. The conserva will be more loose than preserves. Cover and refrigerate. Conserva will keep for about 1 month.