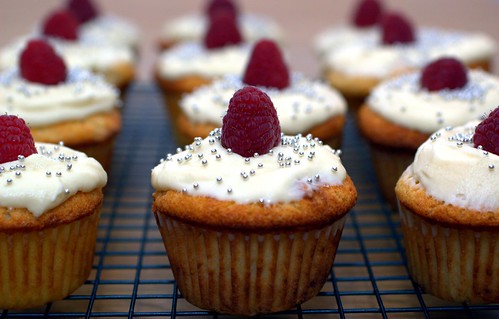 I often joke that my friends no longer allow me to attend their parties without baked goods in tow. Cupcakes – to be more specific. Cupcakes topped with frosting generously slathered on, or piped in tiny dots, or with semi-Impressionist-looking flowers. But cupcakes in their most shining glory – a tiny, single-portion cake made just for you. It’s cake – personalized and it doesn’t get better than this. Somehow, in its miniature form is just that much cuter than its bigger cousin, but then again, baby anything is much cuter than its adult version. 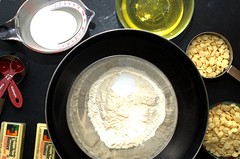 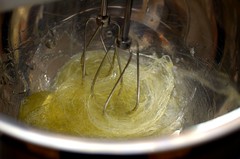 To put another way, here’s my definition for a cupcake, aside from the generally accepted dictionary one:

cupcake: \ˈkəp-ˌkāk\ a single serving of an antidote to a case of the grumpies; something beautiful and sweet that makes it impossible to continue having a bad day.

I think my definition should be added to dictionaries world-wide – dietary habits aside, who doesn’t like a bit of cake? Really? Who? 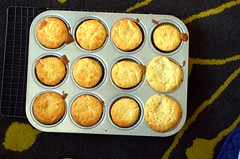 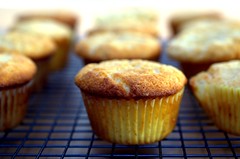 My feelings for cake border on fervent. I need dessert. Dessert is to dinner what the period is to the end of the sentence. (I did very well on this portion of the SATs!) I love the ritual of eating a cupcake, and yes, for me it is a ritual. I love tasting the frosting; love its lingering taste on my tongue; love carefully peeling the cupcake lining off to make a tiny plate around it. Somehow, I feel super-indulgent, but not overly guilty because they’re pretty small and there’s only so much damage I can do. Unless I’m having several. 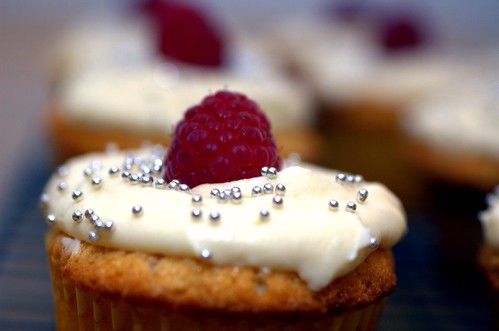 Cupcakes are easier to make and frost than a cake, somehow feel and look more festive, take less time to serve (no cutting involved) and leave no cake stand to wash afterward. And while sometimes occasions call for cake, big, multi-layer, beautiful cake, around this time of year, cupcakes somehow seem more appropriate. They even had a National Cupcake Day a few days ago, and while I was trying to get this post out on time, work got the best of me and I had to postpone. But I guarantee you, if one of those babies was in my hand during the week, I would have made good on my deadline – cupcakes have that power of giving you extra strength, and maybe creating a few extra hours in the day, during a holiday season generally associated with being a bit overwhelming. Perhaps I just found an antidote to the holiday stress? I’d like to think so. 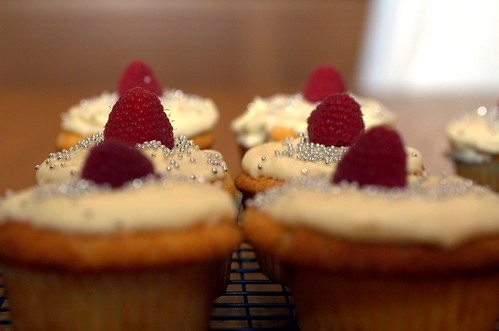 These are very holiday-appropriate: white chocolate base with a white chocolate buttercream-cream-cheese frosting. The tiny silver dragées and a single raspberry makes them feel so Christmasy and festive. These cupcakes come from the new Karen DeMasco’s book, “The Craft of Baking”, which I love love love and cannot wait to make just about everything from the book. I made a few notes in the recipe (below) which I implore you to read – as they’ll make this recipe, along with cooking from this book in general, a smoother experience.

2. In a medium bowl, sift together the flour, baking powder, and salt; set it aside.

3. In the bowl of an electric mixer fitted with the paddle attachment, beat together the butter, sugar, and vanilla on medium-high speed until light and smooth, about 3 minutes.

4. Bring about 2 inches of water to a simmer in a large saucepan. Place the white chocolate in a heatproof bowl, set it over the simmering water, and stir until it has melted. Add the warm, melted chocolate to the butter mixture and stir to combine. Scrap down the sides of the bowl with a rubber spatula.

5. With the mixer on low speed, alternate adding the flour mixture and the coconut milk, adding one third of each at a time and letting them fully mix in before adding the next. Transfer the batter to a medium mixing bowl.

6. Clean and dry the bowl of the electric mixer well. You want to make sure the bowl is absolutely dry to whip your whites. Add the egg whites, and using the whisk attachment on medium speed, beat to soft peaks, about 4 minutes. In three additions, fold the whites into the batter. Note that folding, is not mixing. To fold properly, drop 1/3 of the whites into the batter, gently lift the batter from the bottom and fold over the whites. Go around the bowl repeating. Add another 1/3 of the white and repeat the folding; and then finish folding in the remaining egg whites. Be careful not to over-mix. Folding takes a little bit to master.

7. Fill the muffin cups about three-quarters full with batter. Bake, rotating the tins halfway through, until the cupcakes spring back to the touch and a cake tester inserted in the center of a cupcake comes out clean, 15 to 20 minutes. Transfer the tin to a wire rack. Invert the cupcakes onto the rack, turn them top side up and let them cool completely.

[Note: my cupcakes sank a tiny bit, I’ll play with the recipe again to see if it’s something recurrent. It’s possibly the egg whites sinking in a bit.]

1. In the bowl of an electric mixer fitted with the paddle attachment, beat together the cream cheese, butter, vanilla, and salt on medium-high speed until light and smooth, about 3 minutes.

2. Bring about 2 inches of water to simmer in a saucepan. Place the chocolate in a heatproof bowl, place the bowl over the pan, and stir until the chocolate is melted. Slowly add the melted chocolate to to the cream cheese mixture and beat to combine, scraping down the sides of the bowl as necessary. If the butter-cream is too soft to spread, cover the bowl and chill it for 20 minutes; then white it in the mixer for 30 seconds before using. (The butter-cream can be refrigerated for 1 week or frozen for up to 1 month. Before using, bring it to room temperature and beat it for a few minutes until smooth.)

3. Spread the tops of the cupcakes with the frosting, swirling it decoratively.

The cupcakes can be kept in an airtight container in the refrigerator for up to 3 days.

Salt in recipes from this book:
In November 12, 2009 article in the NYTimes T magazine ran an article on Karen DeMasco’s book and in it, they specified white type of kosher salt Karen uses. I didn’t think much on it, until I read that Morton’s weighs differently than Diamond Crystal, which affects baking, as it’s pretty precise. I’ve kept the excerpt below for you as well.

Melting white chocolate:
Because white chocolate has a very low melting point, around 111 degrees F, it’s tough to control melting in a microwave, a method that works for dark and/or milk chocolate. You really should melt white chocolate in a double boiler carefully over low heat, and once melted, use immediately as the chocolate dries out easily.

Frosting:
I recommend making twice the amount of frosting if you want to create lovely, generous dollops and not “ration” your frosting.