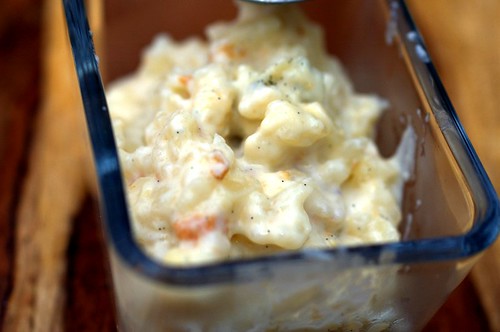 I’ve never been much of a fancy girl. Were it up to me, I’d spend my days in jeans and tank tops. Don’t get me wrong, I clean up rather nicely, but I am at my happiest just hanging out. Getting dressed-up never feels natural. Even when I get my hair cut, I hate to have my hair blown-out, choosing instead my unruly mess of frizzy waves. My affinity for the informal is probably why I don’t yet own a single little black dress. Not one. That should soon be rectified: a wedding I’m in this year wants the bridesmaids in LBDs, so I will be shopping for one pretty soon. Anyhow, dresses are dresses and jeans are jeans and I will forever have a love affair with the latter and regard the former with a bit of annoyance. Pizza, beer, jeans, and a tanktop – and I’m one happy camper. 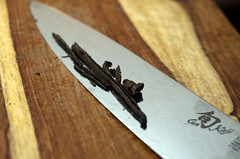 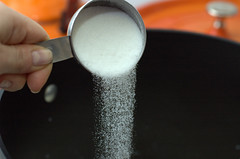 At least I’m consistent. As unfussy as I am about dress code, I like to apply the same to food. Comforting and soothing is something I’ll take any day over fancy and engineered. I’ve deep respect for fine, jacket-and-tie kind of dining, but were it up to me, were I running a restaurant, mine would be focused on soothing souls and nurturing the senses. I’d serve rice pudding for dessert and call it a night. 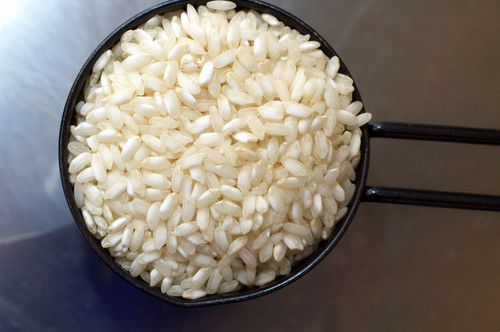 I think that rice pudding is just about one of the loveliest things there is out there. Like cozy wool socks, or homemade marshmallows. It’s my go-to comfort dessert, and one that I welcome this time of year with open arms. It also makes your house smell deliciously divine: sweet, warm, wintry. I prefer my rice pudding slightly warmed, but a friend of mine recently confessed to having an unhealthy addiction to eating cold rice pudding early in the morning before work. A breakfast pudding, if you will. While she felt pangs of guilt about indulging her rice pudding yen in the morning, to me – nothing sounded better because I was reared in a type of morning rice pudding in Russia. Except in Russia we didn’t call it rice pudding – we called it “risovaya kasha” or kasha made of rice. Kasha, in Russian, denoted a porridge of sorts, usually eaten for breakfast and made with a whole grain. My arch-nemesis was something called “mannaya kasha” – which, I think, in the US is called farina. I still shudder at the thought. 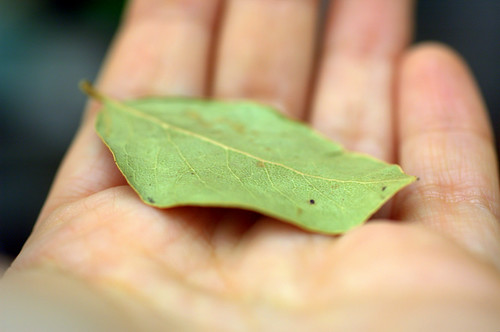 Of course, as a kid I was an impossible-to-please-picky-eater; I gagged on practically everything that was milk-based. Grass-fed cows’ milk, folks. Cows that knew not what hormones or antibiotics were. Cows that spent their days in the pasture, calmly, thoughtfully (I like to think) chewing on grasses and mulling around. And I gagged on such a thing.

I grew up in a household that thought (rightly so!) that milk equaled health; and a healthy child was what the zenith of family goals should be. Thus various milk products were force-fed down my through as if I were a foie gras goose being readied for the plumping. Breakfast was almost always a hot grain cereal: sometimes buckwheat, sometimes cream of wheat, sometimes the overcooked, glue-like oatmeal my grandmother loved to serve. And sometimes, when I was lucky, it was rice pudding. Studded with raisins and impossibly rich. I ate that with more enthusiasm than other breakfast foods mostly because the raisins served as a good distraction. 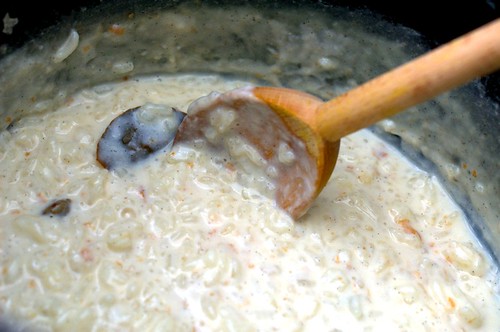 By the time I grew up, I kind of forgot about rice pudding and it was eating kheer at Indian restaurant a few years back that jolted my memory. After that, rice pudding was all I could think about. I made it over and over and over. I combined the Indian flavors with the more traditional pudding recipe. And added a bay leaf as it gave the rice a slightly woodsy, herbal fragrance. Sometimes, rice pudding tastes so candy-sweet, it’s almost overwhelming. I liked having a little earthiness to the smell and the bay leaf complements the sweetness rather nicely.

While I typically share my food with friends, I never shared rice pudding. It would vanish from my kitchen with lightning speed; faster than I could snap a photograph. Last year, I made this pudding, took pictures and then immediately forgot all about it. I do this a lot – forgetting to write about recipes I’ve cooked eons ago. I hope you can forgive me because this is seriously good. And comforting. And warm. And you can have it for breakfast too and not just for dessert. Wearing pajamas. Or jeans and tank tops. Or fancy black dresses. It’s totally up to you!

1. Place all the ingredients in a medium saucepan. Over medium to low-medium heat, bring to a gentle boil and then reduce to simmer, stirring periodically to ensure that the bottom doesn’t get stuck or burnt. Cook for about 30-35 minutes tasting at the end for doneness. The rice granules should be soft, but slightly firm to the bite, especially, if using Arborio rice. Remove from heat.

2. Serve immediately, or wait for a cooler rice pudding (my favorite). Or, if you’re like my friend, chill it and eat it cold. For breakfast. Because you can.