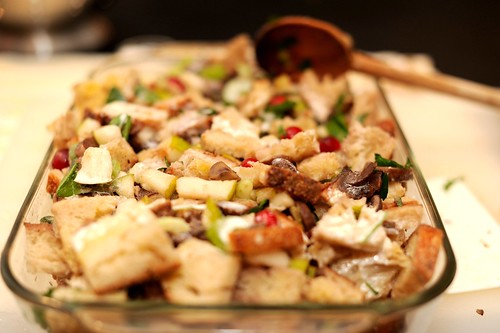 I got so excited to make this stuffing, I forgot to take pictures. I mean, I took two here for you, but by the time this stuffing was ready and coming out of the oven, I was so excited to just eat it, I was all, camera what? And that’s how you, my darlings, got the shaft. Two measly pictures that are mediocre at best. This is what I’ve got for you. Sometimes I’m a selfish lady who thinks only of herself. And you know what’s even worse? This is the fourth year in a row that I made it and forgotten to take pictures. Oh Thanksgiving, you are such a distraction!

Stuffing is near and dear to my heart. I didn’t grow up with it, but perhaps it is precisely because I had a stuffing-less childhood that I am particularly attached to it. I get really upset when someone tells me they don’t like stuffing. I take it personally and feel a challenge coming on – the kind when I hear someone denouncing Brussels sprouts, except I’m pretty sure that more people will say they like stuffing than Brussels sprouts. And I’ve all but made it my personal duty in the cold fall and winter months to spread the Brussels sprouts love around. I’ve made a few converts so far.

But stuffing is a bit more tricky, despite greater popularity. Stuffing, in most homes, makes a once a year appearance as a side-dish (read: supporting star) to the Thanksgiving turkey. And if all you’ve had is dry, bland stuffing that has come out of the box, no wonder you’d rather eat pressed wood-chips. Well, I’m here to tell you that there’s really magnificent stuffing out there. The kind of stuffing you’d want to make all through the season. The kind of stuffing that will make you want a second helping.

As I mentioned before, this year Andrew and I will be in rural Vermont for Thanksgiving, celebrating the holiday with his family. We’re all pitching in to cook dinner, but this also means I cook a portion of the dinner, and not the whole thing. Most people – most normal people – would regard not having to make the full holiday meal as a blessing. But I actually look forward to making it all: the turkey, the stuffing, the cranberry sauce, the pie, soup and the vegetables. When I don’t make a Thanksgiving meal, I feel like most people feel when they leave the house without their watch or cell phone. It’s like something is missing and it’s making you feel a little unbalanced. That’s what Thanksgiving dinner is to me: the culinary equivalent of a cell phone. Leave it behind one day and you’re a mess. 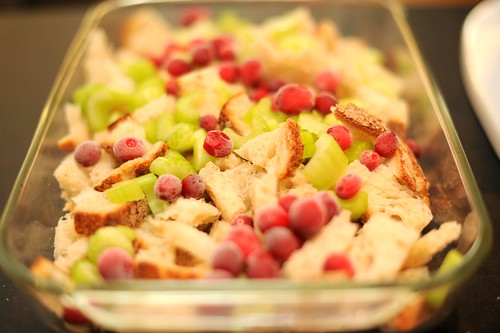 Not to be deterred, I decided that last weekend was going to be titled Fakesgiving – a faux mini-Thanksgiving that gave me an opportunity to recreate the holiday for Andrew and some friends. Next week, when I make this stuffing and what is now a staple in my Thanksgiving repertoire (I’ll try to take some better pictures!), I will have already cooked a complete holiday, and enjoyed it twice. That’s a win-win in my book.

Don’t let the ingredient list below overwhelm you – making stuffing is really easy. You cook some of the components separately and then throw everything together with the dried bread chunks. Add some eggs to bind everything together, some broth to keep the stuffing moist, and some cream to add flavor. And let’s be honest, doesn’t cream make everything better? Add in some chestnuts, pears and dried cherries – and what you wind up with is a stuffing that has it all: texture, flavor, complexity. In the recipe below, I call for dried cherries, but last weekend, I ran out and decided to swap in the cranberries. My final verdict – cherries it is. The sweet-tart chewiness of a dried cherry is the perfect addition to the savory background – it kind of takes you by surprise and I like that. The cranberries, on the other hand, felt a tad too tart for my taste.

So if you’re a stuffing skeptic – I issue my challenge to you. Go ahead, make this – and then tell me if you didn’t like it. Try to do a mini-version of Thanksgiving in your home – you can even call it Fakesgiving, I don’t mind. In fact, I kind of want to start a trend and spread the love around. You can never have too much Thanksgiving in your life.

Tear bread into small bite-sized pieces (you should have about 16 cups) and set in roasting pan or bowl. To dry bread, cover with paper towels and leave out overnight. Or, place on a baking sheet in batches and lightly toast. Set aside.

Wipe mushrooms with a clean, damp towel. Trim tough ends. Slice the mushrooms and set aside.

In a heavy-bottomed pan, over medium high heat, add 2 tablespoons of butter, and then add onion and shallots, season with salt and pepper, and cook, stirring occasionally, until just soft. Do not brown. Remove onions/shallots from pan and set aside.

Add 3 tablespoons butter to pan. Add mushrooms, season with salt and pepper, and quickly sauté until just starting to brown. Remove immediately and add to plate where onions and shallots are resting.

Add wine to pan and deglaze over medium high heat, cooking until wine reduces by about half. Pour remaining liquid over mushrooms. Wipe pan dry and add remaining butter. Add pears and sugar, and season with salt and pepper. Sauté pears, in batches if necessary, over medium high heat until they begin to brown slightly. Remove from heat.

In a large bowl or roasting pan, add sautéed ingredients to bread. Add celery, chestnuts, and cherries. Toss lightly to combine. Add sage and parsley and toss again. Pour in eggs and mix to incorporate. Slowly pour 1 cup stock over mixture and toss to combine. Taste and adjust for salt and pepper. Place stuffing in a 9×13 baking dish, and pour another cup of turkey stock over the stuffing, followed by the cream.

Bake stuffing for about 60 minutes, or until a golden crust forms on bottom. Serve immediately.