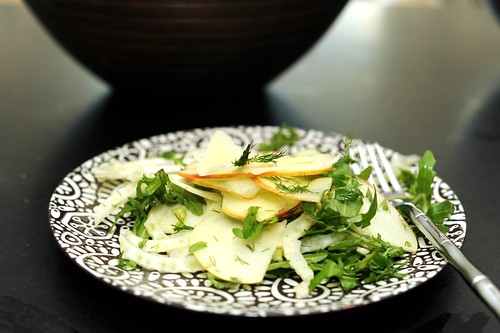 I’m convinced that smoke detectors cause more injuries than prevent them. I was making dinner last night – nothing crazy – just a simple weeknight affair: some roasted fish, some cabbage with hot sauce, some sautéed spinach that needed rescuing. Everything in this dinner cooked pretty quickly, and there was little prep work – it was simple, unfussy, satisfying fare. Andrew was minutes away from home. We were going to eat and finish dinner before 9 pm, which, on weeknights when he isn’t working from home, is an accomplishment. The world was mine for the taking.

Or so I thought. But the universe had slightly different plans for me. The smoke detector decided it was too smoky. I happen to disagree – I could see as clear as day (though Andrew might claim it was a tad smoky in the kitchen). But all was fine and good – nothing was burning, nothing was even close to burning. But a few seconds after I set a hot baked fish on the counter, the alarm went off, and because I flail when I startle (and that detector has been known to raise the dead), I accidentally, in my flailing, happen to touch the edge of the baking tray the fish was on. For a few seconds, which was all that was needed to do the damage. All the while the smoke detector was blaring and a neutral female voice was calmly informing me that there was a fire. There wasn’t. I know because I was there. American smoke detectors are such drama queens. 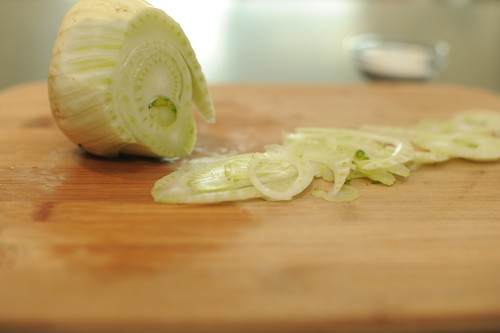 So that was fun, and now I’ve got three bandages on two hands. Not too bad, but slightly on the annoying side. I’ll have to shower with plastic bags on my hands for a few days. It’s not the end of the world, but I just wish that New York smoke detectors weren’t so sensitive. It’s as if they don’t want us to cook in our apartments. Before Andrew moved in, he would set off his smoke detector by frying a single egg.

Which brings me to this seemingly unconnected thought – make this apple and fennel salad. Make it soon, maybe even this weekend. You’ll want to eat it all the time – it’s just so cheery and uplifting. And it will make you feel more like spring is really in full swing (we know it’s coming from the tiny green buds on trees and some flowers out already, but it’s still kind of chilly out). 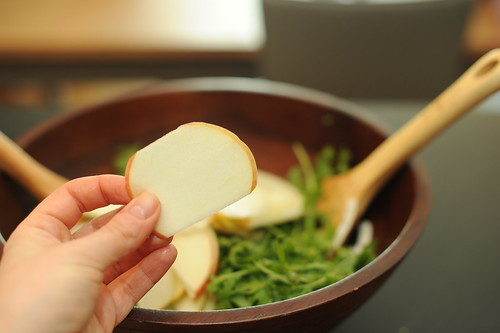 The fennel is so crunchy and refreshing (I can’t believe I ever gagged eating this stuff – and now I can’t get enough of it!) and the tart apples shaved paper-thin feel like they’ve meant to be paired with the fennel slices. Also the dill is key. I know that part of being Russian, means to be a little dill-crazy, but I really think dill and fennel were meant to be together, and I’m pretty sure they’re cousins who see one another over vacations and whatnot. They play so well together – the green dill note mingling with the faintly anise-scented fennel. Baby arugula adds a touch of bite and the whole salad is one crunchy, happy paean to spring. 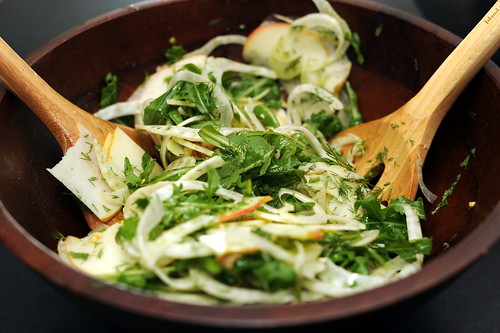 And here’s the beauty of making this in an apartment with a super sensitive smoke detector – it won’t go off and scare you half to death, which given my current blistered and bandaged state – is a definite plus.

If you’re making this salad for two people, you’ll likely have leftovers. It’s well-known that no one likes eating leftover greens salad. But hang on to this one – the apples and fennel get a little softer, but stay crunchy. Makes them excellent topping for burgers – if you happen to have them the next night. Or veggie burgers, if like my friend Jennie, you want to decrease your meat consumption.

1. Combine salt with the lemon juice and stir to dissolve. Let stand a few minutes before combining with olive oil and black pepper.

2. In a large salad bowl, toss together the arugula, fennel, apple, and dill. Toss gently with the dressing to coat well. Serve immediately.