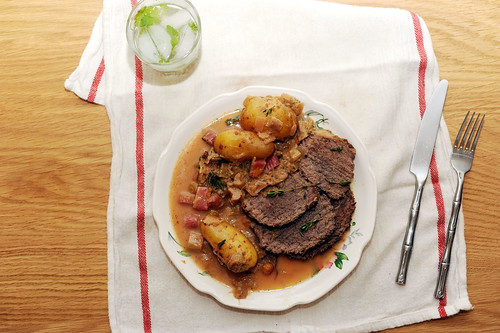 Perhaps it’s unfair that I’m writing this mere days after both Passover and Easter have ended. But spring comes late to us this year, after a prolonged winter has delayed spring crops by a few weeks.

For the last few weeks, every time I’ve chatted with the farmers, the consistent complaint has been a late spring harvest. Just last week I spied ramps and asparagus and squealed with delight. I filled my bags to the brim with verdant produce, eager to devour it in the coming days. 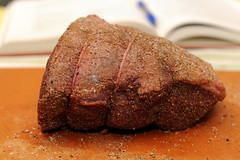 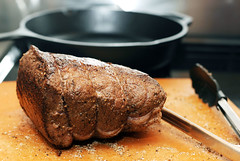 My initial intention was to write about ramps – I certainly bought enough to play around with, but something caught my eye instead – rhubarb. We will see more of it in the coming weeks, so don’t disdain if you couldn’t find any last weekend – but I was so desperate for it (I’d entirely missed the season last year, don’t ask) – that I pounced on it despite the fact that it wasn’t the best of breed, so to speak.

I had glorious plans for rhubarb, you see. It was going to find its way into being slow-roasted, folded into a fool, swirled into yogurt, drizzled over ice cream. It was going places, all right, but I found something better instead; something rather unexpected – rhubarb married with brisket. 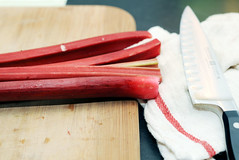 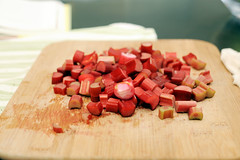 On Sunday night, I was feeling all cozy, settling into my evening as it poured outside. I was leafing through Molly Stevens’ “All About Braising”, one of my favorite and most-used books, when I came upon a brisket recipe with rhubarb and honey. I had never considered the combination before, but as soon as my eyes set upon it, it seemed like a no-brainer. The bright, tart rhubarb notes would perfectly highlight the slow-cooked, tender beef. Inspired, I used the recipe as a canvas for making my own sweet and savory brisket, and for this Russian, adding potatoes to the braise was an essential component. I had beautiful Corola potatoes from the market: small, round, pretty tubers that needed just a gentle scrubbing before going in the pot. 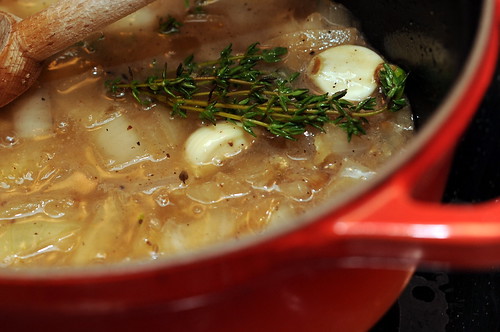 When the pot roast finally emerged, three hours later, it smelled of home, supper, and love – what pot roast doesn’t? We sliced it diagonally across the grain and ladled the thick rhubarb sauce over, adding a few potatoes on the side. There was that first bite, when I closed my eyes in heightened bliss, chewing slowly, savoring every nuance of the many flavors. 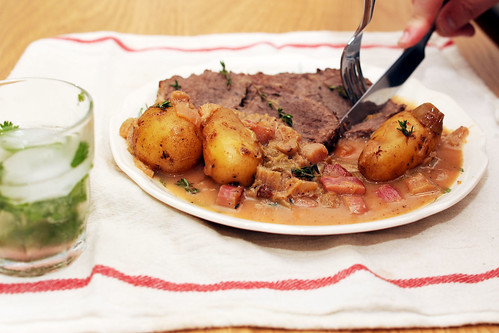 Rhubarb with brisket – who knew? I think such revelatory findings deserve their own holiday. While the traditional spring holidays are behind us, why can’t we have a “Happy Spring Brisket With Rhubarb” day? You find a day, you put it on your calendar, you tell your friends or spouse to be ready and hungry, you make the brisket, and you eat it. Happiness on a plate. Spring in the air. Finally!

1. 12 hours before you want to make the pot roast, combine the spices in a small dry skillet over medium heat and toast for 1 to 2 minutes, shaking the pan frequently. Allow to cool for a minute, then grind the spices together to a coarse powder in a mortar or a spice grinder. Add salt and grind to combine.

2. Wipe the brisket with paper towels, and spread the spice rub all over both sides of the meat. Pat the spots that didn’t get the spice mix, somehow, to make sure that the entire brisket is covered. Place the brisket on a platter, cover loosely, and refrigerate overnight.

3. Preheat the oven to 300 degrees F. Heat 3 tablespoons of olive oil in a Dutch oven, over medium-high heat, until it is shimmering. Brown the meat on all sides about 4 minutes per side, turning the meat with tongs when it’s time. Watch the brisket carefully – if you think it’s browning faster than the indicated 4 minutes, turn it on another side earlier. Remove the brisket from the Dutch oven and set aside.

4. While the meat is browning, trim both ends of the rhubarb stalks, making sure to cut off, completely, the leaves, which are toxic. Using a paring knife, or a vegetable peeler, strip the outer stringy layer from the rhubarb. Chop the stalks into 1/2-inch pieces. You should have about 4 cups.

5. After you are done browning the meat, add the onion (you might need to add a tablespoon more oil) and sauté until softened and beginning to color, 5 to 7 minutes. Season with salt and pepper, add the garlic, ginger and raisins, and sauté for another minute. Add the wine, bring everything to a boil and simmer for 5 to 7 minutes until the liquid reduces slightly. Add half the rhubarb, the zest, thyme, bay leaf, and honey. Bring everything to a boil and cook for 2 minutes, stirring, to allow the flavors to meld. Lower the brisket back into the pot.

6. Cover the pot with parchment paper, pressing down so that the paper nearly touches the meat and the edges hang about an inch over the sides. Place the Dutch oven lid on top, and slide the pot into the lower third of the oven. After 15 minutes, check to see if the liquid is bubbling actively. If it is – lower the heat 10 to 15 degrees. Continue to braise at a gentle simmer. Turn the brisket over after 30 minutes. Then, after another 1 1/2 hours, turn it again, and add the remaining 2 cups of rhubarb and the potatoes. Continue to braise for another hour or so, until the meat is fork-tender – for a rough total of 3 to 3 1/2 hours.

7. Gently, remove the brisket fro the pot using a spatula or tongs – and set it on a carving board with a moat to collect any runaway juices. Cover loosely with foil to keep warm. Your sauce will be thickish from the rhubarb and will have mostly collapsed into the braising liquid. Skim any surface fat and taste the sauce – if it tastes too “sharp” from the rhubarb, add a bit more honey, but only a little at a time, as honey can quickly overpower other flavors.

8. Carve the diagonally, across the grain into 1/2-inch thick slices. Ladle the rhubarb sauce over, and serve.