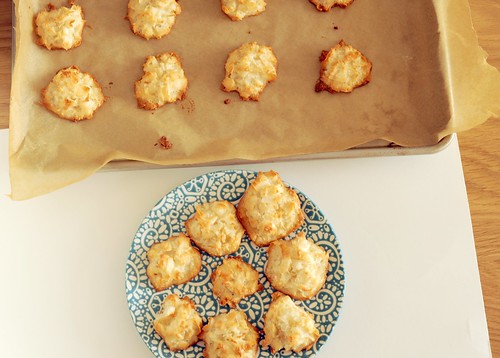 My first ever macaroon was an utter disappointment. Our first Passover in the United States brought to our table a lot of surprises. We could just walk into the supermarket and buy our matzo there. Imagine that! Just like people buy bread and eggs and milk – there it was, in a special isle (its own isle!) with a big bright sign that said “Passover Foods”. We were in shock, amazed that this kind of blatant display was in full view of everyone to see.

Back in St. Petersburg, my family would go to this one particular spot in the city where you could get matzo. We would then transport it back where it would reside in our kitchen, among all the regular food items. No one in Russia cleaned out their kitchen free of “chametz” for the holiday – it just wasn’t a practice back then. Plus, on your way back from the matzo pick-up, you kind of had to be discreet with it. Being Jewish in Russia wasn’t particularly hip and if you were too vocal about it, it was downright dangerous. 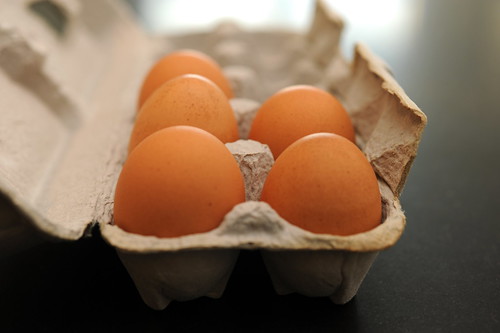 Speaking of dangerous, I have this vivid memory, when we still lived in Russia, of my father going to the synagogue for Rosh Hashana with my mother pleading with him not to walk down the street wearing his makeshift yarmulke in broad daylight. She was afraid he wouldn’t make it home – but he did it anyway, in a brave act that borders on careless. If something had happened to him, he would have left a wife and a little child behind. It is ironic that my father, who doesn’t believe in god, made it a point to go to temple in Russia on the High Holidays. It is also lucky for all of us that nothing happened to him in the process. 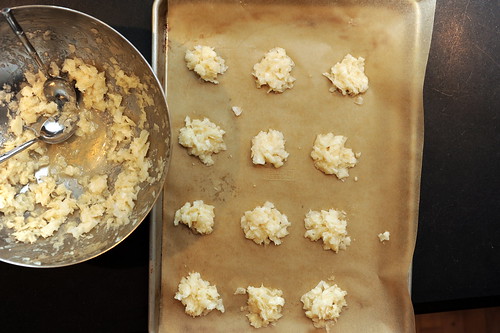 Back to our first Passover supermarket experience – you can only imagine our shock when we walked into the supermarket to find boxes upon boxes of matzo, jars of gefilte fish, a kosher for Passover orange juice (!), candies, soups, matzo meal, and boxes of cookies named macaroons among many other items. My father decided we should give macaroons a go and put a box in our grocery cart. 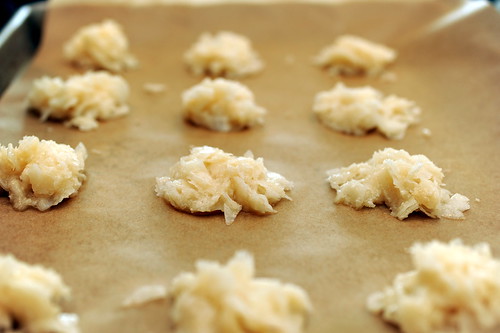 Later at home, when we dug into our holiday-appropriate foods and it came time to sample the macaroons, I bit into one tentatively. I spat it out. It was gummy and sugary and had a chemical aftertaste. Not knowing better, I blamed the coconut and decided that perhaps these chewy cookies were not for me.

It was decades before I tried them again. And it’s all because of Andrew. 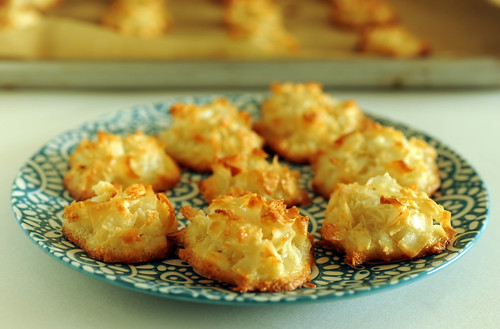 Casually, a few months ago, he mentioned that the single reason he looks forward to Passover is the prospect of eating macaroons after a seder. I attributed his nostalgic love of irrational comfort of childhood treats, but he persisted and I wound up promising him macaroons for Passover. I leafed through many a cookbook and read up on what makes for a satisfying, tasty macaroon. The most helpful of cookbooks was Alice Medrich’s latest “Chewey Gooey Crispy Crunchy Melt-In-Your-Mouth Cookies” – an amazing cookie book (whose pages I sometimes want to eat) with instructions specific enough to satisfy the most meticulous minds. Alice Medrich (who’s blog I adore), knows her desserts, and she is painstakingly exact about them – providing you volumes and weights, telling you what to look out for in recipes. It is one of her recipes that I wound up adapting – with spectacular results – from the two dozen macaroons I made, we ate everything within two days. Let’s not consider the caloric impact of such a move – some might deem it a mistake, but what a delicious mistake that was.

So delicious, it blows those little boxed macaroons out of the water – and to smithereens.

Currently, I’m experimenting with adding a bit of melted butter into the mix here. Obviously, you might want to skip it if making this for a seder, given that brisket is often the center of the seder meal. However, if your seder is meat/bird free, you could try adding a couple of tablespoons of melted butter. The results are heavenly.

1. Place all the ingredients in a large heatproof mixing bowl (stainless steel is best) and set the bowl in a skillet with barely simmering water and stir the mixture with a wooden spoon, scraping the bottom to prevent burning. Stir for 5 to 7 minutes until the mixture is very hot to the touch and the egg whites have thickened a bit. They will turn from translucent to opaque. Set the egg white mixture aside for 30 minutes to thicken up more.

2. Preheat the oven to 350oF and place the racks in the upper and lower thirds in the oven. Line 2 cookie sheets with parchment paper.

3. With two tablespoons, place the coconut mixture in neat heaps on the lined cookie sheets – 2 inches apart from one another. Bake for 3 minutes and rotate the sheets from front to back. Bake another 2 minutes, and switch the baking sheets from top to bottom and vice versa. Lower the temperature to 325oF and bake for another 10 to 15 minutes, until the macaroons are a mix of cream and gold colors and the edges get slightly brown. Cool baking sheets on cooling racks and let cool completely before peeling away from the parchment paper.

4. Serve, preferably, on the day the macaroons are baked – they’re best day one. However, they’re still delicious for a few more days, though it’s doubtful they will last that long in any household that loves a macaroon.