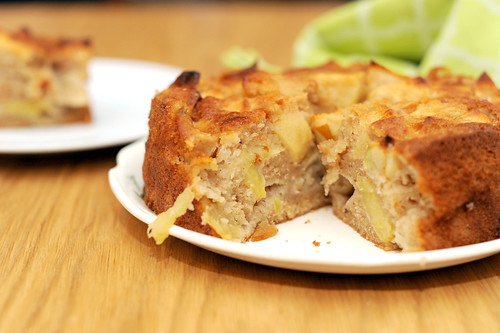 When it comes to farmer’s market wares, my eyes are often more bigger than my stomach. I forget that I’m shopping for two and go overboard, returning home with bags practically overflowing with the market bounty even with the greenmarket’s current modest showing. I worry what will happen once strawberries and asparagus hit the market, along with their friends, artichokes and fava beans.

A few weeks back was no different. Forgetting that there are only so many apples two people can eat in one week before the apples are past their prime, I wound up with a few too many. And given that we were going away for Passover, I knew that by the time we had returned, these apples would’ve grown mealy. 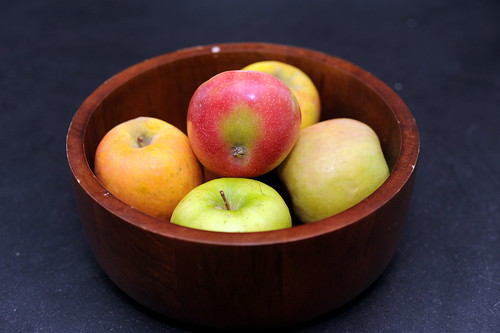 When I wind up with too many apples (which happens more often than you’d think) – I am loathe to let them waste and always try to cook them into something. Apple sauce often seems fitting and since I have enough friends with babies and toddlers, this has historically worked out to be a good proposition. But I was feeling nostalgic, and remembering an apple cake my mom used to make when I was little called “Charlotka” and wanted to channel that instead. 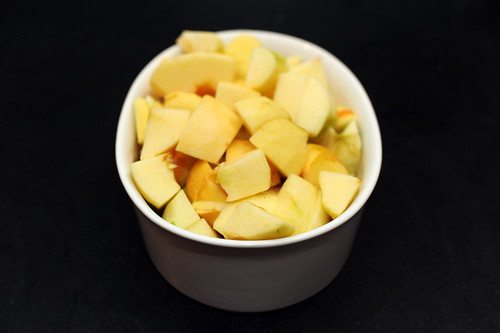 Because my mother operates according to the “a little bit of this, and a little bit of that, and cook until ready” school of cookery, I always need to test her recipes to come up with exact proportions. This is particularly true of baking – the woman cooks “by hand” and I, for the most part, weigh and measure. So armed with her ingredients and rough proportions, I cross-referenced one of Dorie Greenspan’s recipes that’s pretty much identical to that of my mother’s, and set out to make my own version of a childhood favorite, swapping in some whole wheat flour and adding cinnamon and cardamom into the mix. 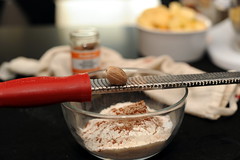 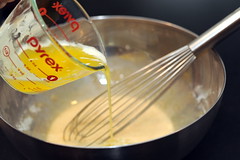 The batter, almost too liquidy to be a cake, and barely covering the apple chunks went into the oven only to emerge, an hour later, puffed up and dimply, the latter being very good if you’re describing an everyday cake, or a baby. 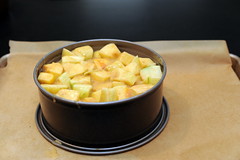 Warm and perfumed, it took some time to cool – and we had to exercise a lot of patience not to dig into it right away. And when we did, it was just like my mother’s cake, only a bit more toothsome, thanks to the whole wheat addition. We’ve been treating ourselves to a slice after dinner, and one with our morning tea. 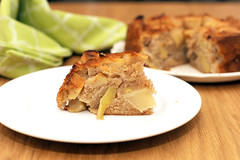 Not bad for a project that was only intended as a rescue mission. Perhaps I need to go and buy too many apples again.

1. Position a rack in the center of the oven and preheat the oven to 350 degrees F. Generously butter an 8-inch springform pan and place it on a baking sheet line with parchment paper.

2. In a small bowl, whisk together the flours, baking powder, salt, cinnamon and nutmeg.

3. In another large bowl whisk together the eggs until they are foamy. Add the sugar and whisk until well blended, about 2 minutes. Whisk in rum and vanilla. Whisk in half the flour and when it is incorporated, whisk in half the melted butter, followed by the rest of the flour and the rest of the butter. Mix gently – so that the resulting batter is smooth and thick. Using a rubber spatula, fold in apple chunks making sure that each piece is coated with the batter. Scrape the mixture into the springform pan and smooth it out as best as you can with a spatula. The raw cake will look lumpy, almost as if you don’t have enough better.

4. Place the pan into the oven and bake for 55 to 70 minutes, or until the top of the cake is golden brown and a knife inserted in the center comes out clean. You might see the cake pulling away a bit on at the sides. Transfer to a cooling rack and allow to rest for 15 minutes.

5. Using a butter knife, carefully run it around the edges of the cake and carefully remove the sides of the springform, being careful not to pull away any apple bits. Allow the cake to cool to room temperature before removing it from the bottom of the springform (same process as removing the sides). Serve at room temperature. The cake will keep for a few days – best to over it with a kitchen towel rather than plastic wrap.