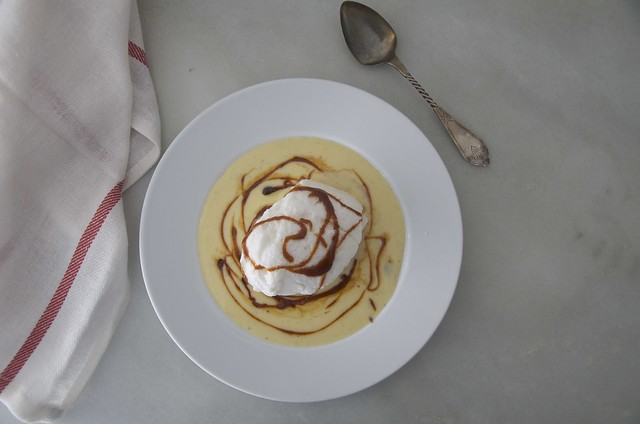 As I mentioned before, my life, as of late, has been revolving around crème anglaise which is hardly a bad thing. First it was for a recipe I was testing for a cookbook; then it was for Andrew Scrivani in a kitchen session that involved many, many eggs; then it was back again in my kitchen with more crème anglaise for one of the cookbooks (and that’s not even involving the ice cream book!) At one point in time there were four cartons of eggs in my fridge.

I’ve always liked making custards and have found the process of tempering eggs and slowly thickening the custard on the stove to be a meditative, soothing process. So, the last few egg-yolk-milk-and-cream-rich weeks have hardly been a struggle. The biggest problem I’ve had to face

is where to store all the different batches of custard and how not to eat them in a moment of abandon.

At one point, while elbows deep in custard, it occurred to me that the whole île flottante idea, those glorious puffs of steamed (or sometimes baked) meringue floating in a pool of chilled crème anglaise, might be the perfect dessert for a Jewish holiday meal. A post brisket Hannukah, or even more appropriately, a Passover dinner. Without any flour involved, meringue makes for a fitting Passover dessert; there are only so many macaroons you can eat before you long for something more decadent. And while our household is hardly kosher (we made porchetta over the weekend and lobster rolls last night), I like to play by the rules over the holidays, with a dairy-free (and on Passover a flour-free) dessert after a holiday meal usually involving some kind of meat.

I had read about île flottante in various French-focused cookbooks, and I recall Julia Child talking about it on her show. The mere name sounded so fancy, so unattainable, so old-school French. Like a croquembouche, île flottante was old France. And whereas tarte tatin somehow made it to the foreground of modern and homey desserts, île flottante seemed to have been left behind. Was it because it sounded fussy and complicated, so French in its name? I’m not sure, but I’ve recently discovered it’s rather simple to make. In fact, I’ve been wondering why this dessert isn’t served more often. This is the kind of thing you serve and your guests’ eyes widen, awestruck, and they possibly cannot believe you when you say it was easy. They might even think you’re being coy and fishing for compliments, and the more you protest and try to tell them this dessert is, indeed, easy, the more they might find you insincere. 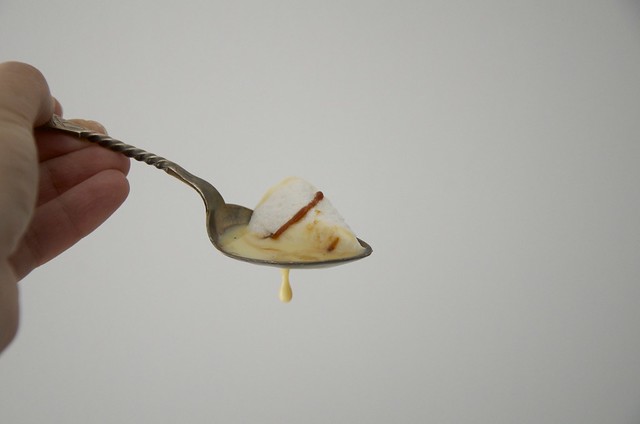 Anyway, I came up with the idea of coconut milk crème anglaise while on my fourth of fifth crème anglaise batch in a row (I was giving my forearm a workout stirring so much). I wanted to see if it was as good as regular crème anglaise with milk and cream, because if it were, I had a new shiny dessert come the holidays.

Understatement of the week: I wasn’t disappointed.

Every bit as luxurious, the coconut version had more caramel notes – a certain roundness and an earthy sweetness. I would’ve gladly consumed it sans floating meringue, although cooking meringue by steaming it, as traditional for île flottante, has become my favorite way to cook (and eat) meringue. With a gentle simmering method, the meringue doesn’t harden but instead firms up slightly, all the while retaining its cloud-like lightness. Eating it, especially for the first time, is a revelation: it feels like you are biting into the lightest of marshmallows and within seconds it melts away on your tongue. I promise you: that first bite will be a gateway to many more.

Right about now, I am finding myself feeling like I’ve fallen behind on my projects. I’m not sure what is the matter: I work around the clock and I seem to be making progress but as I look at the work that is left, and what still remains to be done, I feel a little bereft. I am pretty sure I felt this way working on Marc Forgione’s book, but that was last year, and memory proves to recall only the most exciting of moments — not the ones that tested me the most. My most natural, immediate response is to panic and feel as if I have no business doing what I’m doing. Usually around then, I make myself go for a walk in my neighborhood. I notice the changing leaves, the smell of fall in the air, the sun peeking through the clouds, and I remind myself that this is a one-step-at-a-time type of work. The trick for me, right now, is how to balance book work and non-book-related work. And also to find some time to do other things besides work and sleep like see friends, exercise, read. I no longer know what day of the week it is because it no longer matters. 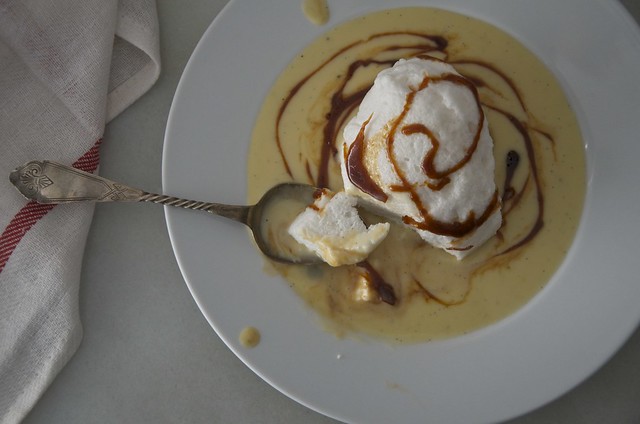 In a yoga class I took last Sunday (first time in many many weeks), I had trouble with just about every asana, but in particular, the balance ones proved most challenging. What has typically been attainable for me, was, on that Sunday morning, outside my grasp. I laughed it off and focused on the fact that I actually made it to class. For me, that was accomplishment enough.

Not into creme anglaise? How about Almond Cake?
The weather is getting downright autumnal. Were I not recipe testing, I’d be making this turkey sausage and mushroom ragu.

If you’re not as concerned about keeping your dessert kosher, I like a little pat of optional butter that’s added to the caramel in the end. I think it adds a little something, however, I’ve made it without and it works just fine. Just watch the caramel carefully as it goes from perfectly ready to burnt in about five seconds (and I’m not exaggerating). Also, a reader, below, asked about regular creme anglaise. I won’t attempt to reinvent the wheel here. If you want to make this traditional (dairy) way, then use 1 cup milk and 1 cup heavy cream instead of coconut milk and I like 6 egg yolks here with the dairy version instead of the 4 below.

Make the Crème Anglaise:
1. In a medium saucepan set over medium heat, bring the coconut milk, vanilla seeds and pod to a simmer. Remove from heat, cover, and let steep for 20 minutes. Remove the vanilla pods and set aside. Warm the milk mixture again until small bubbles form.

2. Meanwhile in a medium bowl, whisk together the yolks and sugar until thick and pale. While whisking, drizzle the warm dairy mixture into the egg yolks, mixing it in. Add half the coconut milk mixture before pouring the custard back into the pot. Set it over low heat, stirring without stopping with a wooden spoon or a silicone spatula. Cook over medium-low heat, stirring constantly with a wooden spoon, until mixture is thick enough to coat the back of the spoon and hold a line drawn by your finger, about 5 minutes. Pass custard through a fine sieve into a medium bowl. Place bowl in ice-water bath; stir crème anglaise occasionally until chilled. Cover tightly and refrigerate for at least 2 hours, and preferably for 24, before using. The time in the refrigerator will intensify the crème anglaise flavors.

Make the Meringue:
3. Bring the coconut milk to a bare simmer. In a bowl of a stand mixer fitted with the whisk attachment beat the egg whites with salt and cream of tartar at medium speed until they turn opaque and start to thicken. With the mixer still going, gradually add the sugar and when all sugar is incorporated, add the vanilla. Increase the speed to high and beat the egg whites until they have firm peaks but are still glossy.

Make the Caramel:
5. When ready to serve, in a light-colored, medium, heavy-bottomed pan set over medium-high heat, melt the sugar and cook, swirling the pan occasionally (not stirring) until the caramel turns the color of a copper penny. If any sugar crystallizes on the side of the pan, gently wipe it with a clean pastry brush dipped in cold water. Remove from heat and stir in butter, if using. If using butter, stand back – the mixture will bubble and hiss. When the bubbles die down, using a silicon spatula, stir the caramel until smooth.

Assemble the Île Flottante:
6. Spoon some crème anglaise over the bottom of a plate and settle a meringue “island” in the center. Using a fork or a small whisk, drizzle with caramel and serve immediately. The caramel should harden almost immediately, giving you a pleasant crackle when you try spoon some of the meringue with the crème anglaise.